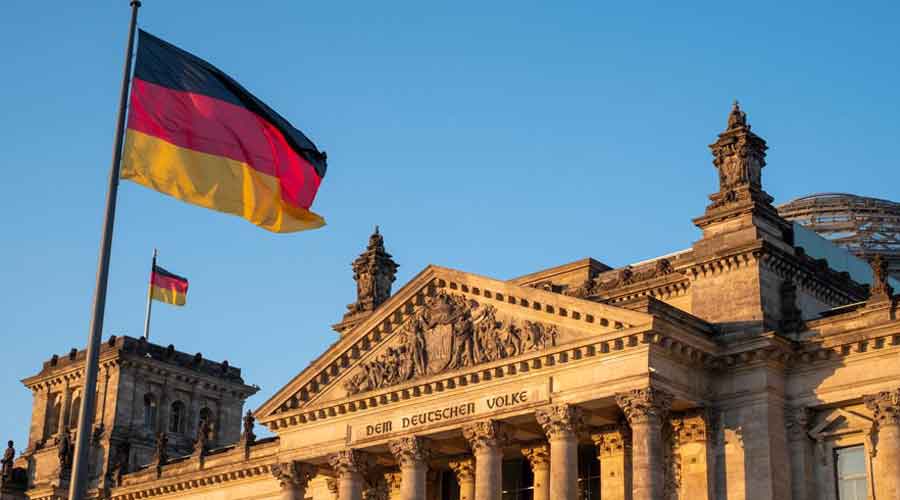 The Lufthansa stewardess on the flight from London to Munich handed me a very small yellow-wrapped bar of chocolate, the usual ration. When she saw that I was working my way through a long German document she gave me one more, exclaiming “Sie sind so fleissig (You’re so hard-working)!” I explained that this was actually the 177-page coalition agreement among the three parties forming her new government. Excitedly, she now showered me with a whole handful of the miniature chocolate bars, followed by yet another handful. Most of them I offered to my neighbour, who has young children, but I slipped a couple into my pocket. A few days later, I presented one of them to a key minister in the ‘traffic light’ government of Social Democrats, Greens and Free Democrats that formally took office in Berlin on Wednesday. He accepted it with appropriate ceremonial gravity.

Some chocolate is called for. Given the difficulty of reaching common ground among the three different parties, the coalition agreement is remarkably coherent, substantial and ambitious. Parts of it are even well-written, with echoes of the inspirational rhetoric of the great chancellor of West German Ostpolitik, Willy Brandt. As befits a democracy now more widely respected than that of the United States of America, it proposes a mixture of continuity and change.

Yet, the government headed by the chancellor, Olaf Scholz, faces huge challenges from its very first day. As often before in German history, many of these lie in the east. They are Germany’s new ‘Eastern Questions’.

The first is actually within its own borders, in the former East Germany. In September’s general election, roughly a quarter of the votes cast in Saxony and Thuringia went to the Far-Right, xenophobic Alternative for Germany. Just this week, there was a flash-mob-type demo in Saxony against compulsory vaccination which was reportedly organized by Far-Right activists. The underlying social psychology has more in common with that in other parts of post-communist central Europe, such as Poland and Hungary, than it does with that in, say, Hamburg or Stuttgart. Scholz’s agenda of ‘respect’ for those who feel ignored or disrespected has particular relevance here.

Germany’s second new eastern question is about the erosion of democracy and the rule of law in Poland and Hungary. Germany’s economic presence in these countries is enormous. Under Angela Merkel, Berlin has been largely responsible for a too soft European Union line towards their populist rulers. The coalition agreement is very strong on the need for more European unity and respect for the rule of law. Will the new government follow through, becoming a decisive advocate of all-European action to restore democracy in Hungary and the rule of law in Poland?

The third and fourth eastern questions are inextricably intertwined. They concern the lands between the EU and Russia, namely Ukraine and Belarus, and Russia itself. The balance among relations with Russia and those with the other countries of central and eastern Europe is one of the oldest conundrums of Germany’s eastern policy. The last 300 years have seen every possible variant, including the most extreme: the brutal, total division of Poland between Hitler’s Germany and Stalin’s Soviet Union along a secretly agreed line in autumn 1939. Old ghosts are easily awakened in east European minds. Many have seen the Nord Stream 2 gas pipeline, connecting Russia directly to Germany, as another example of Germany prioritizing its relationship with Moscow over the interests of the lands between.

In this respect, the coalition agreement is remarkable. It puts the relationship with Ukraine and Belarus immediately after those with the US and the United Kingdom, and before that with Russia. It supports the Belarusian Opposition’s demand for new elections and declares “the Russian intervention in favour of [Belarusian president Alexander] Lukashenko is unacceptable.” It commits to supporting the restoration of the ‘full territorial integrity and sovereignty’ of Ukraine and calls for an end to any further attempt to destabilize that country.

Yet, before the ink is dry, these fine words are being put to the test. Vladimir Putin is massing a large military force on Ukraine’s eastern border, demanding respect for his ‘red line’ that Ukraine should neither join NATO nor be militarily supplied or supported by NATO members. US intelligence says this looks like a serious invasion force. At least one participant in the annual Valdai meeting with Putin this October came back with the impression that the Russian threat was real. German intelligence apparently thinks it is still sabre-rattling.

Either way, credible deterrence is called for. President Joe Biden is concentrating on economic measures and Germany is a key player within the European and Western orchestra. Is Chancellor Scholz prepared to say clearly to the Russian leader, at least in private, that if Russia were to invade Ukraine again, the Nord Stream 2 pipeline would become the world’s largest underwater white elephant? That would upset Scholz’s former party boss, Gerhard Schröder, who is — quite  disgracefully — the chair of Nord Stream 2, but it would be a major signal of the new government’s democratic, European and Western commitment.

The Russian/Ukrainian issue is the most urgent, but Germany’s fifth eastern question is the biggest in the long run: China. Call it the far eastern question if you will. The language on China in the coalition agreement is, again, quite striking. It adopts the EU’s triadic formula of ‘partnership, competition and systemic rivalry’, mentioning human rights violations in Xinjiang, the destruction of ‘one country, two systems’ in Hong Kong, and the need for transatlantic coordination of China policy. It insists that any change of the status quo in the Straits of Taiwan can only happen peacefully and by mutual agreement.

Now at this moment, China is blocking all imports from Lithuania to punish the small Baltic EU member state for allowing the opening of a Taiwan representation office. Beijing is even pressurizing multinational companies to drop their Lithuanian suppliers. The EU is supposed to be a single trading bloc, speaking with one voice. The European Commission is proposing a strong package of measures precisely to counter such bullying. Is Germany ready to support a robust EU response to Beijing’s attempt to divide and rule inside Europe, or is it too frightened of damaging its own economic relationship with China?

In addressing these eastern questions, the new German government faces two large domestic obstacles: German business, which for the most part just wants to go on making money in all these places, especially in China, and German public opinion, which, for the most part, has simply not woken up to how threatening the world has become, especially in the east. But at least there is the intellectual understanding and proclaimed political purpose at the top. If Germany’s new leaders succeed in striking the right balance in each case, then not just one mingy Lufthansa chocolate bar but a large box of the very best Belgian chocolates should be upcoming.

(Timothy Garton Ash is Professor of European Studies at Oxford University and a Senior Fellow at the Hoover Institution, Stanford University)