Advertisement
Home / Opinion / Cat out of water in Sunderbans

Cat out of water in Sunderbans

GINGERLY YOURS: What about tigers from Bangladesh crossing over into our territory through the forests? 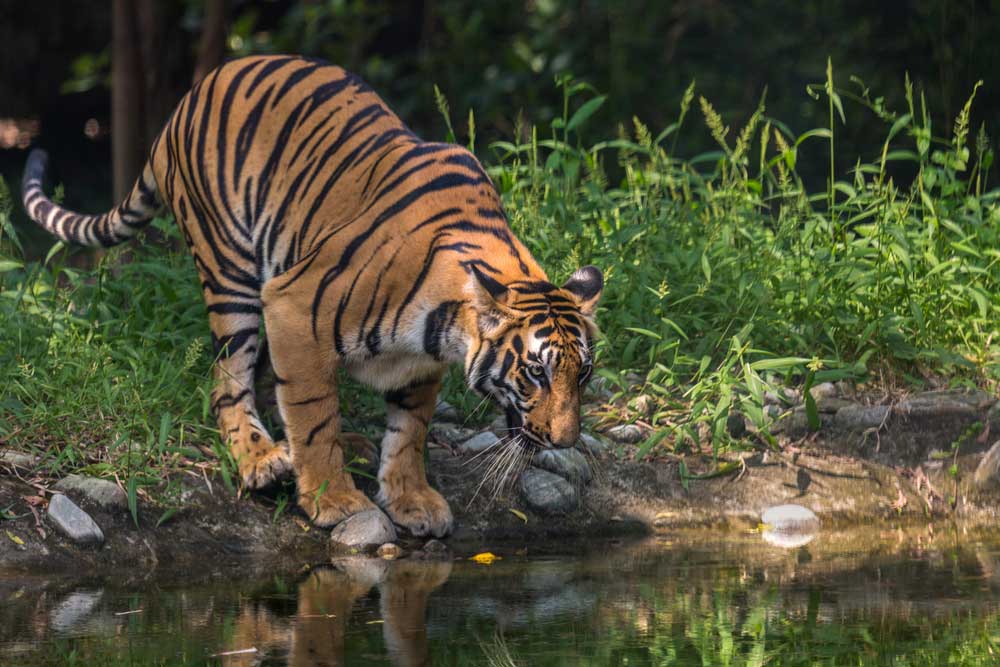 It is likely that a new Indian law is scaring foreigners off from entering India illegally. But we are so anthropocentric. What about the tigers from Bangladesh crossing over into our territory through the Sunderbans? Are we vigilant enough about that porous border?

No news update has told us anything so far about the tigers being concerned. We have to assume that Bangladeshi tigers are carrying on as before with an absolutely open mind about India.

This has to stop. Here is a set of guidelines for the authorities in case an illegal Bangladeshi tiger is spotted in Indian territory.

First, ascertain whether the tiger is Hindu or Muslim. If Hindu, it is welcome. It will be regarded as a refugee, and a victim of religious persecution to boot, and India will give it shelter under the Citizenship (Amendment) Act. If Muslim, it has to undergo a few procedures.

To begin with, an Indian official shall read out to the tiger, in clear, but calm, measured tones, what the West Bengal BJP chief, Dilip Ghosh, had to say about the milk of “desi (indigenous)” cows of India.

Desi cows, he had said in November at a meeting at Burdwan, have a hump on their back, which foreign breeds do not have. The hump has something called a ‘swarna nari’ (a gold channel? a nerve? a duct?). When sunlight falls on the hump, it produces gold. That is why the milk of the desi cow is yellowish or lightly golden. “It contains gold,” he had explained.

And that is why if one drinks only desi cow milk, it is enough for sustenance, he had added. On social media, scientific diagrams were posted on the chemical process of extracting the gold from the milk.

If the cows of a desh are so powerful, what about its tigers? This thought will certainly act as a deterrent for some Bangladeshi tigers and make them want to return on their own, their tails tucked in. They will be handed over to the Border Guard Bangladesh. A nice pushback.

But there will be some tigers not cowed down by cows. For them a stronger course of action. They shall be converted to Hinduism.

Although according to many, Hinduism did not ever have a provision for conversion — being a Hindu was considered a way of life into which everyone was born, and therefore there was no question of a conversion — for the political forces that control the Centre now, conversion (or “reconversion”) remains a potent fantasy. So a sindur tika shall brand the converting tiger’s forehead and a marigold garland shall be thrown around its neck and it will be greeted with traditional drumbeats into the Indian side of the Sunderbans.

Here, we have to keep in mind two things, both related to Bengal. One, the political forces are at work in subtle ways already to appropriate Dakshin Ray — the tiger deity of the Sunderbans in India and Bangladesh, who rules over all the forests, beasts and spirits, and is worshipped by all communities — into the fold of Hindu gods. Two, a man, who had tried to garland a tiger in the Alipore zoo, had been killed by the beast. Garlanding a tiger is not easy, but we must not give up.

If conversion, too, does not work, the authorities will have to resort to the third method. The illegal tigers shall be fed only vegetarian food. Fruits in the morning, veggies for lunch, dal for dinner. No milk. Nothing to do with cows for these tigers.

This will slowly kill the infiltrating monsters.

But if they don’t die even after the application of the starvation method, a mob will be set upon them, their teeth will be plucked out and they will be lynched.

This will lead to the establishment of a Hindu rashtra of tigers. The Indian Sunderbans will be cleansed and restored to its true inheritor, the Royal Bengal Tiger — pure, full-blooded and ready for the kill.