This federal election should have been a walkover for Justin Trudeau, so what's gone wrong? 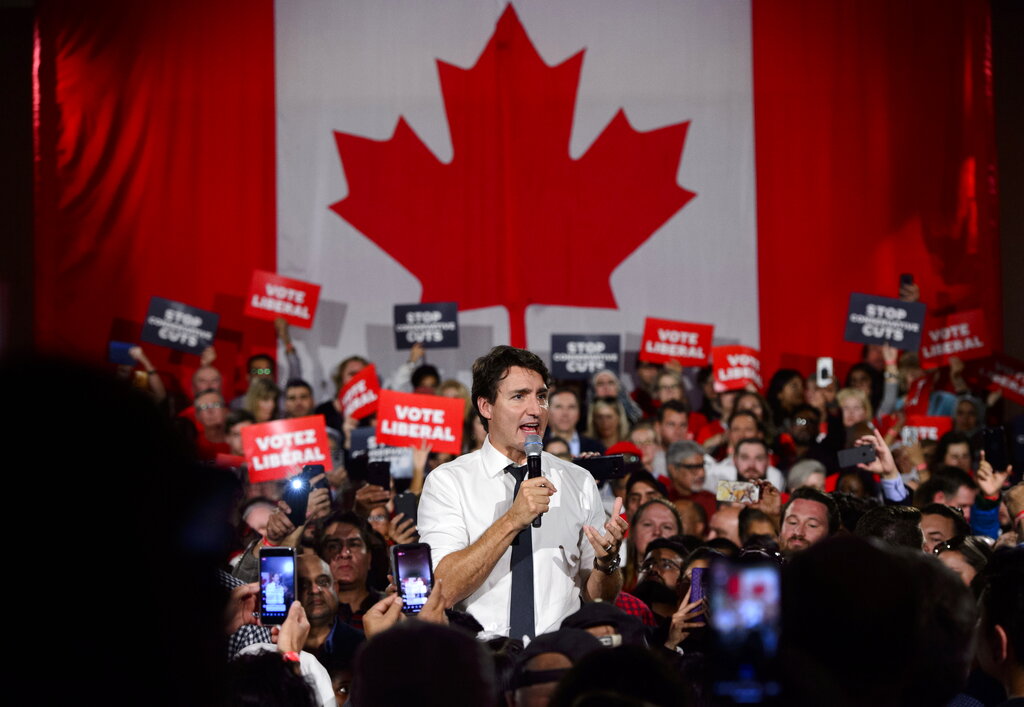 This Canadian federal election set for Monday should have been a walkover for Liberal Prime Minister Justin Trudeau. The economy’s booming and the jobless rate is at its lowest in decades. The leader of the main opposition Conservative party is a man who lied about passing his insurance broker exams, hid his dual US citizenship and in a hastily assembled campaign manifesto pledged massive government spending cuts but didn’t say what would be axed.

Instead, though, 47-year-old Trudeau is fighting for his political life and desperately hoping voters will look past his missteps and scandals, and elect him back into office because they dislike his Conservative rival, Andrew Scheer, even more than they dislike him.

Heading into voting day, the Conservatives and Liberals are in a statistical dead heat. Trudeau’s disapproval rating has hit 58% which is worse than US President Donald Trump’s 56%.

There’s a distinct possibility Canadians could wake up after election day to a government led by Scheer if disenchanted voters stay home or split the vote by casting ballots for the left-leaning New Democrats, led by Jagmeet Singh, the first non-white leader of a major Canadian political party, or the Greens.

Even if Trudeau’s Liberal party does win re-election, opinion polls suggest it will be likely a minority government that will need the support of the New Democrats or Greens to keep in power. Traditionally, small shifts in voting patterns can alter the outcome of elections in the country of 34 million people.

In a final weekend campaign swing through vote-rich Ontario, Canada’s most populous province, Trudeau stressed the country was at a pivotal juncture. “Canadians across the country are facing a very clear choice, one that will allow them to stop Conservative cuts and elect a progressive government,” Trudeau said. “We need to make sure that everyone understands that this election is about our collective future.”

Scheer is planning to slash CAN $34 billion from the federal budget to wipe out the deficit, while throwing in a sweetener of personal income taxes reductions, end anti-pollutant taxes on fossil fuels and scrap Canada’s environmental impact assessment legislation for fuel pipelines and other industrial projects.

How did it all go so wrong for the good-looking, affable Trudeau who five years ago ended the heavy-handed nine-year premiership of Conservative Stephen Harper in a stunning electoral rout? There was a time when Trudeau could do no wrong and Rolling Stone magazine put him on its front cover, under the headline: The North Star. Is He the free world’s best hope?

What’s got Trudeau the most unwanted attention in one of the most ill-tempered election campaigns in recent Canadian history is the now infamous “blackface” photos dug up from two decades ago showing him wearing blackface makeup, most memorably dressed as Aladdin in a turban, at a costume dress party at a private school where he worked as a teacher.

The trendy, image-conscious Trudeau has apologised numerous times to voters for blacking up, saying it was a “racist, unthinking” thing to do. Liberal supporters insist Trudeau’s actions should speak louder than his ill-advised hijinks of 20 years ago. They note Trudeau’s strong rebukes of Trump on immigration, his appointment of a gender-equal, ethnically diverse cabinet -- it includes four Sikh ministers -- and the warm welcomes he’s extended to many Syrian and other refugees.

But Trudeau’s political opponents and many ordinary voters have refused to let go of the blackface episode, saying it raises questions about Trudeau’s credentials as a champion of racial and ethnic diversity and his judgement. They accuse him of being more show, than political substance.

Scheer, who has repeatedly refused to eject members of his party for racist or homophobic statements, said he was “shocked and disappointed” by the actions of Trudeau, who was in his late 20s when the photos were taken.

Then, earlier in the year, Trudeau’s former attorney general Jody Wilson-Raybould, accused the prime minister and his close aides of bullying her in a bid to get her to go soft in a corruption case against Canadian engineering giant Lavalin based in Trudeau’s home turf of Quebec.Trudeau was later found to have broken an ethics law by pushing the attorney general to seek a civil penalty rather than a criminal conviction.

Trudeau’s fall from political grace was also greased by his blunder-ridden visit to India in early 2018 where he was roundly mocked for a string of political, cultural and fashion missteps. .

With his back to the wall, Trudeau’s been campaigning non-stop to win back supporters. In a pitch to younger voters, he’s unveiled plans to make home-buying easier and lower Canadian cell phone charges that are among the highest in the world. He’s said a ban on “military-style assault rifles” would be applied nationally in Canada after a string of tragic shootings. He’s stressed his commitment to Canada meeting its international targets to reduce greenhouse gas emissions.

He’s introduced a national carbon tax policy but he also upset environmentalists when he opted to spend CAN $4.9 billion on a pipeline to ship oil to the West Coast from Alberta. And in a move that raised some eyebrows but won general approval last year, Trudeau introduced legislation to make Canada the first Group of Seven nation to legalise recreational cannabis.

On the economic performance, the government is in the lucky situation of having no apologies to make. Unemployment is at its lowest since 1976, economic growth is strong and Canada is steadily transforming into a technology heavyweight from being dependent on fossil fuels and other natural resources.

in the midst of what has been an uphill campaign, Trudeau received one boost from a man who remains hugely popular with Canadians. A few days ago, former US president Barack Obama paid tribute to Trudeau, tweeting that he’s “a hard-working effective leader who takes on big issues like climate change.” He backed Trudeau for re-election, saying that the “world needs his progressive leadership.´

Glimpses of the new world order: a gladiator arena for multinationals