Advertisement
Home / Opinion / To get the break it needs, Britain must talk European

Because of Theresa May’s incompetent intransigence, the immediate choice before the UK is no-deal Brexit or delay 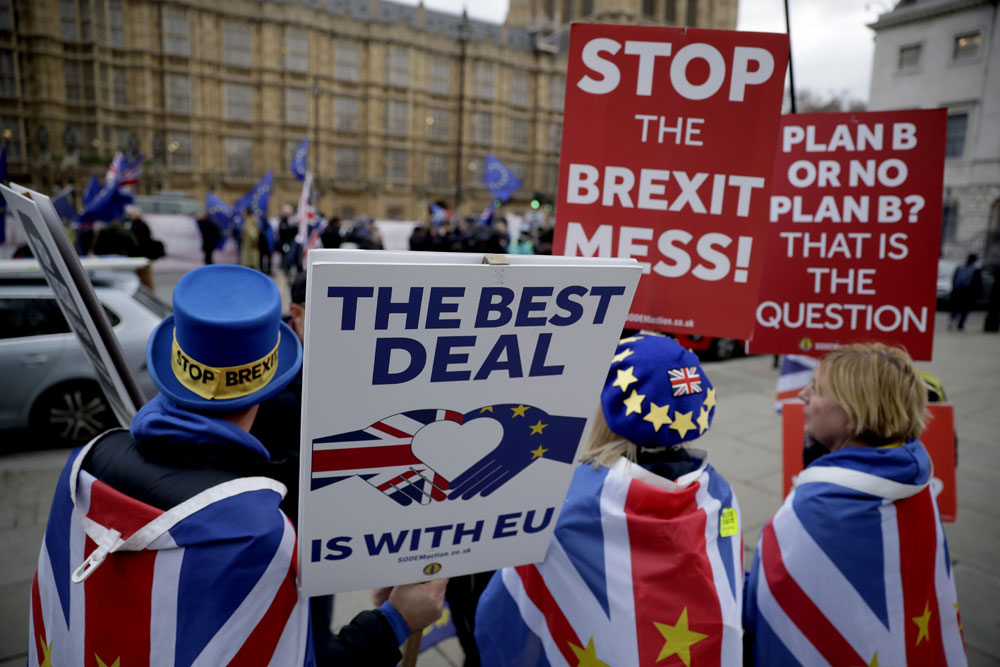 Even from pro-European British mouths, the phrase ‘remain and reform’ can all too easily sound like ‘you must reform so we can remain’. The burden of our song should be the other way round: ‘we must remain together so we can reform an EU that needs it to survive and prosper.’
(AP)
Timothy Garton Ash   |   Published 28.01.19, 03:16 AM

An old New Yorker cartoon shows a middle-aged man at a drinks party saying to another: “But that’s enough about you, let’s talk about me!” This is Brexit Britain talking to the rest of Europe.

To be sure, all nations are obsessed with their own affairs. A Polish joke has it that the entry for elephant in the Polish encyclopaedia reads “the elephant and the Polish question”. But most European countries have at least some accompanying sensitivity to what is going on around them.

I wonder how many people in Westminster last Tuesday even knew that the leaders of France and Germany were, that very day, signing a new treaty of cooperation in Aachen; that the French president, Emmanuel Macron, deeply shaken by the level of support for the gilets jaunes protests, has launched a ‘national debate’, much like the one being called for in Britain; that Poland has been shaken by the senseless murder of the liberal, pro-European mayor of Gdansk, Pawel Adamowicz, in an atmosphere of partisan conflict so bitter that the nation could not even unite in the face of such tragedy. Reflecting on all this turmoil, the whole continent is gearing up for European elections in May which will be a battle royal between two fundamentally different visions of the European future — a conservative, nationalist one spearheaded by the Hungarian, Viktor Orbán, and the Italian, Matteo Salvini, and a more liberal, internationalist one represented by the much weakened Aachen duo of Macron and Merkel. Orbán and Salvini don’t intend to leave the EU, they intend to run it. So it’s not just the future of Britain that will be decided this year, it’s also the future of Europe.

This is the background against which Britain’s European partners are appealing to the country, with a mixture of exasperation and desperation, to tell them what it wants. An EU spokesman actually did a deadpan rendition of the Spice Girls’ “tell me what you want, what you really, really want”. In return, Theresa May gives a superb imitation of a 1950s gramophone record with the needle stuck in a groove. Because of May’s incompetent intransigence, the immediate choice before the country is ‘no-deal Brexit or delay’. There is only one responsible answer.

Fortunately, there are enough people in the British Parliament, supported by numerous individual members of the government, who recognize that it can’t go on like this. If two key amendments tabled with cross-party support are passed next week, Parliament itself will be able to take the initiative in debates about Brexit every Tuesday — and if no way forward has been found by the end of February, the government will be instructed to seek an extension of Article 50.

Before formulating the request for an Article 50 extension, however, British politicians would do well to stop for a moment and — unlike the man at the drinks party — look at it from the other’s point of view. If the British are constrained by their laws and politics, so are the EU 27. The key legal problem is the elections to the European Parliament. European law says that the new Parliament cannot legally convene on July 2 unless there are properly elected representatives from all the member states. If the United Kingdom remains a member state, but does not hold European elections, everything the new Parliament does would be vulnerable to legal challenge.

Behind the legal problem is the politics. Some people in the EU really want Britain to leave, and would be happy to use this issue as a justification for pushing the recalcitrant Brits out of the door. Many more would in principle like Britain to stay, but are completely exasperated with London’s shilly-shallying and feel it is more important for the rest of the EU to get on with saving itself. Then there are those who really want us to stay, including the likely next chancellor of Germany, Annegret Kramp-Karrenbauer, and other leading German figures who recently conveyed that message in an extraordinary, heartfelt letter to The Times. But they, too, are impatient for Britain to say what it wants. Specifically, as the European Commissioner, Pierre Moscovici, puts it, the EU needs a ‘reasoned request’ for extending Article 50.

Now here’s the rub. Most EU sources agree that it would be relatively straightforward to get an extension until July 1 (thus not significantly impacting the new European Parliament). Those extra three months might be sufficient for the British Parliament to agree on some tweaked version of May’s deal, or to put the goal of a softer Brexit (somewhere between permanent customs union and Norway plus) into the political declaration. They are nothing like enough to have the national debate Britain needs and then hold a carefully prepared second referendum. Moreover, it is not until after the European elections, the appointment of four top people in the EU (the new presidents of the European Council, European Commission, European Parliament and European central bank), and quite possibly the emergence of AKK as head of a new German government, that we will have a clearer idea of what kind of EU it is that the UK will finally be deciding to stay in or leave.

For clarity on both the British and the European side, we need another year, until March 29, 2020. Yes, I already hear a collective groan echoing from Durham to Delphi — but seriously, what’s a year when a century is at stake?

Since the May government (insofar as it still exists) will not prepare such a reasoned request, we on what I call the 3Rs side of Britain’s great argument — 3Rs standing for referendum, remain and reform — should do it ourselves. In the manner of ‘Track 2’ diplomacy, some of our well-qualified lawyers and former officials should explore informally with European colleagues possible legal solutions to the genuinely knotty problem of the European Parliament after July 1. As important, our politicians should take a closer look at a continent in which everyone is facing challenges that have many of the same causes as the Brexit vote, and try to put our reasoned request in that wider European frame.

One of Britain’s chronic problems in Europe is that while there have been many pro-European British politicians, there have been far fewer who actually speak European, in the way that French and Germans, Poles, Spaniards and Italians instinctively do. For they start, with both head and heart, from the premise of a shared future. Even from pro-European British mouths, the phrase ‘remain and reform’ can all too easily sound like ‘you must reform so we can remain’. The burden of our song should be the other way round: ‘we must remain together so we can reform an EU that needs it to survive and prosper.’ That melody at least has a sporting chance of finding some sympathetic ears.

If we Brits are to gain the time we need for the biggest political decision of our lives, we must speak not just plain English but also elementary European.