Britain and the EU five years after Brexit 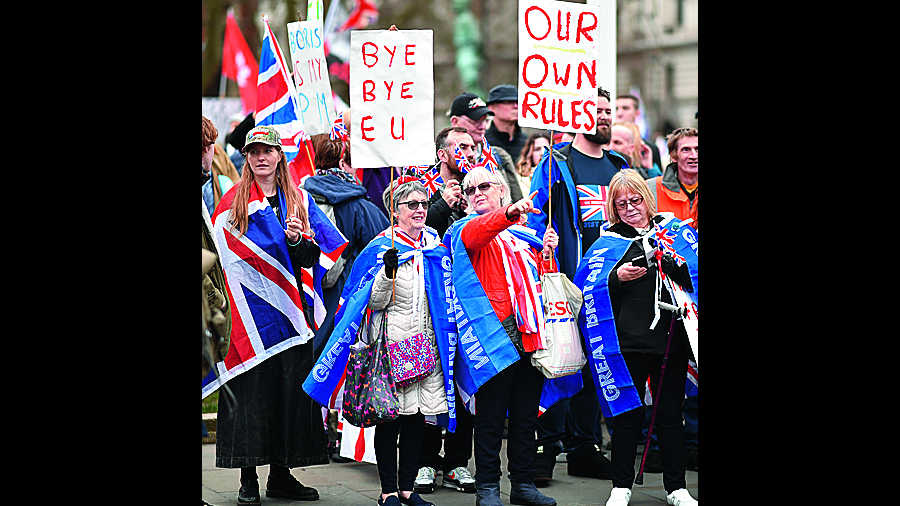 Five years after the fateful referendum on June 23, 2016, what is the current balance sheet of Brexit? Answer: two weakened unions, the British and the European, and bad-tempered relations between them.

The weakening of the British union is obvious. There will be another referendum on Scottish independence within the next few years. Scottish nationalists may win it with the argument that Scotland should leave the British union to rejoin the European one. A vote in Northern Ireland on Irish unification seems more likely than at any point since it was first provided for in the Belfast agreement in 1998. Boris Johnson’s government is full of rhetoric about keeping the union together but has no strategy for doing so.

The negative economic consequences of Brexit have been hidden by the impact of the pandemic but some are now emerging from the Covid fog. Official figures show that British exports of food and drink to the European Union declined by nearly 50 per cent in the first quarter of 2021. An academic study has estimated that the United Kingdom’s exports of services were cumulatively £113 billion lower over the four years of 2016 to 2019 than they would have been if the country had not quit the EU.

Despite the glorious photo opportunities offered by the recent G7 summit in Cornwall, Britain’s international influence is clearly diminished. In Cornwall, the UK and the United States of America promulgated a New Atlantic Charter to mark the 80th anniversary of the original Atlantic Charter signed by Winston Churchill and Franklin D. Roosevelt in 1941. An inoffensive catalogue of good intentions, it nonetheless invites a painful comparison between the global influence of Britain then and now. Countries like Germany and France see their strategic future in the ‘European sovereignty’ of the EU, the very organization that Britain has just left.

It is less immediately obvious that the EU has been weakened. Some in Brussels and Paris even suggest the opposite, arguing that it is easier to agree on further steps of European integration after getting rid of the pesky Brits. Indeed, perhaps the greatest unity ever achieved between member states of the EU has been in their negotiations with Brexiting Britain. But if you want a ‘geopolitical’ Europe, one that can hold its own against a superpower like China, then losing a large member state with the financial, diplomatic, military and other assets of the UK is a big loss. Objectively, the Union’s external strength is diminished at precisely the moment it needs to be increased.

Moreover, levels of Euroscepticism are alarmingly high in core member states. The vote share of Eurosceptic parties in the EU has more than doubled in the two decades since 2000. In a recent ECFR poll, more than 50 per cent of French, Germans, Italians and Spanish said they think the political system of the EU is ‘broken’ rather than ‘working well’. Only 46 per cent of German respondents and just 38 per cent of French said it was a good thing for their country to be a member of the EU.

These views are not a result of Brexit. Rather, they are a product of concerns similar to those that drove many Brits towards Brexit. But they are sharpened by the fact that there is now a large former member state with which to compare the EU’s performance. The figures in that ECFR poll are almost certainly so high because it was conducted in April this year when the contrast between the UK’s and the EU’s vaccine roll-out performance was most stark.

In polling done by eupinions for my Oxford research group a month earlier, 45 per cent of Europeans said they thought that the European commission had handled the procurement and distribution of vaccines badly. According to the Dutch scholar, Catherine E. de Vries, Euroscepticism across the continent works by benchmarking  and Brexit provides a big new benchmark. Even if most Europeans think that Brexit is a mistake overall, they can still see post-Brexit Britain doing better in individual areas. Vaccines are not the only one.

This brings us to the problem of bad relations across the Channel. Most continental Europeans talk very little about Britain at the moment and then only with bewilderment, irritation or contempt. In the most astonishing finding in the ECFR poll, just 14 per cent of German respondents said they see the UK as an ally of Europe, an ally being defined as “a country that shares our interests and values”. A larger number (20 per cent) preferred to describe Britain as a rival. True, 34 per cent viewed Britain as a “necessary partner” of Europe, but then 31 per cent said that about Russia and 28 per cent about China.

Here, you have to distinguish between inevitable and avoidable cross-Channel tensions. It is inevitable that there will be increased competition, especially as regulatory regimes diverge in some sectors. On Northern Ireland, it is a logical impossibility to have a closed border between Great Britain and the EU but an open border between Great Britain and Northern Ireland, Northern Ireland and the Republic of Ireland, and the Republic of Ireland and the EU. The Northern Ireland protocol tries to square this circle with an awkward fudge. It was always going to need a lot of trust and goodwill to make it work  but that is precisely what is now lacking.

The current level of mutual distrust and mud-slinging was anything but inevitable. Ninety per cent of the blame for this lies with the British government, especially with Boris Johnson and Britain’s lead negotiator, David Frost. The bombast. The point-scoring. The twisting and turning. The declared willingness to breach international law. The refusal to have any structured relationship with the EU as such beyond narrow implementation of the withdrawal and free-trade agreements.

But a small part of the responsibility lies on the continental side, and particularly with the European Commission. I recently participated in an online meeting with a senior Commission official closely involved in relations with the UK. In tones of constant irritation, she repeatedly stressed that Britain is simply “a third country”. Of course that is the legal position, just as when two people divorce they become, legally speaking, third parties. But Britain and the EU were married for more than 45 years. Imagine someone who had been married for 45 years speaking of their former spouse as just “a third party”, a complete stranger. A more historically aware and strategic language should be heard from the EU’s political leaders, including the new German government after this autumn’s election.

In the long run, we must work towards a Britain where a clear majority sees the point of being in the EU and an EU that is doing so well that even the sceptical, cussed English want to rejoin it. In the meantime, however, what we need in cross-Channel relations is the political equivalent of the famous prayer of the theologian, Reinhold Niebuhr: the courage to change what can be changed, the serenity to accept what cannot be changed, and the wisdom to distinguish the one from the other.