State of play | Why is the Bhakt excited by Vladimir Putin? 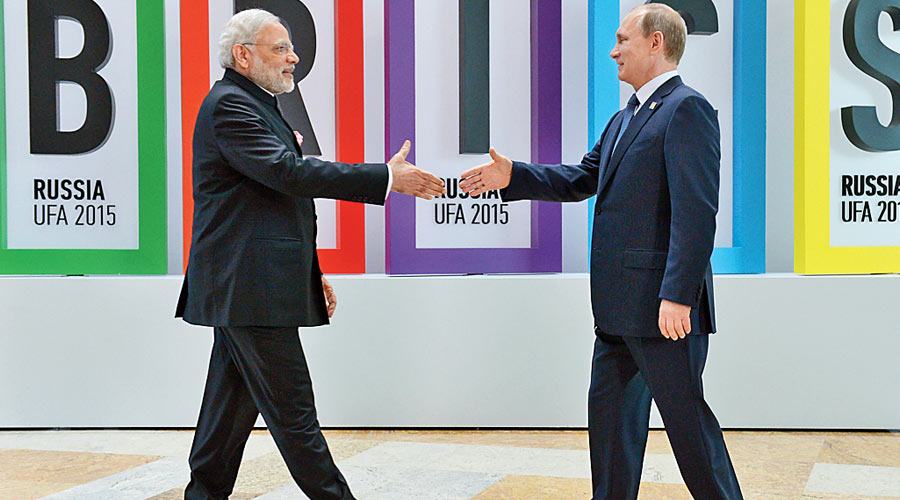 President of the Russian Federation Vladimir Putin, right, and Prime Minister of the Republic of India Narendra Modi at the welcome ceremony for the BRICS leaders during BRICS/SCO Summits - Russia 2015 on July 09, 2015 in Ufa, Russia.
(Photo by Sergey Guneev/Host Photo Agency/Ria Novosti via Getty Images)
Sankarshan Thakur   |   Published 02.03.22, 12:40 AM

Ukraine hasn’t allowed Vladimir Putin more than a bloody-nosed nibble, as I write, but the Russian despot has swiftly won himself a chunky fandom in India. Putin’s vandalism has stirred vicarious bursts of revelry in the Narendra Modi fellowship, such that a question begs to be asked: just what is it about the illicit thrusts of Putin into Ukraine that tickles their viscera?

The answer isn’t complicated; it’s, in fact, rather simple — it’s the role model thing, the fortuitous sighting of just the mould Modi should cast himself in hereon — Vladimir Putin manqué. They’ve found a contemporary hero for their hero; they are fraught with the thrill of what this moment could inspire in their own leader and circumstances. Ergo, this celebration of thuggery.

Probably more by default than by design, Prime Minister Modi mimics President Putin remarkably in trajectory and trait. Few things have conveyed to me the contours of this uncanny likeness than The Man Without A Face: The Unlikely Rise of Vladimir Putin by the Russian-American journalist, Masha Gessen. It is arguably the most incisive and meticulously reported portraiture of the man who has put himself obdurately at odds with the world with his medieval incursions into Ukraine. I turned to the volume afresh last week for insights into what may have triggered Putin’s craving for conquest and found that in a postscript added a few years ago — Gessen had presaged the fires currently raging in Ukraine. “At the end of March 2014 President Barack Obama met with other NATO leaders in Brussels to discuss Russia and Ukraine and then gave one of his clear, cogent speeches. ‘This is not another Cold War that we are entering into,’ he said, ‘After all, unlike the Soviet Union, Russia leads no bloc of nations, no global ideology.’ He was tragically wrong. He had missed Putin’s transformation from a bureaucrat who had accidentally been entrusted with a huge country into a megalomaniacal dictator who believed he was on a civilizational mission... the collective mind of American foreign policy... had just learned to think of Putin as an authoritarian ruler but this view was already outdated. Much more important now was that he had upset the entire post-World War II world order and felt justified and inspired in his aggression.” Echoes of the Nazi Lebensraum. Equally, a spur to calendar imaginations of sanghi Akhand Bharat.

The similarities are far greater and deeper than the desire to ‘correct past wrong’ with resort, however boorish, to ultranationalist expansion. Reading Gessen on Putin is to constantly tempt oneself into translating it into the Modi playbook. To begin with, neither was a politician in the classical sense. Putin came from the KGB stables in St Petersburg; Modi from the ranks of the Rashtriya Swayamsevak Sangh in Gujarat. One of Putin’s comrades from his early years told Gessen that during his years in the KGB Putin received “powerful inoculation against democratic processes”; training in the RSS, under M.S. Golwalkar’s holy grail, couldn’t have been very different.

Both men were relative outsiders to the seat of political power and how it worked. Both arrived at it with astonishing speed and, once there, wrought changes that would render their realms fundamentally altered.

“Writing... about Putin’s early years as president, I am struck by how quickly and decisively he acted. Even when I was covering the story in real time, it seemed to move at breakneck speed. Putin changed the country fast, the changes were profound, and they took easily. He seemed instantly to reverse Russia’s historical evolution... The whole edifice of the Russian regime — which, in the eyes of the world, had long since graduated from showing ‘authoritarian tendencies’ to full-fledged authoritarianism bordering on tyranny — rested on this one man [Putin]...,” Gessen writes. Anyone who cannot see the parallels in India under Modi must be deliberately and mendaciously deluded.

In the abrasive and very often roguish manner Modi and his acolytes treat their political Opposition, likening them to pests and rodents, mocking and mimicking them, employing the hard instruments of State to arm-twist them. In the brutal manner any dissent has come to be treated — as affront to the leader, as obstruction to the nation’s undeclared passage towards Hindu rashtra, the very India of Mohammed Ali Jinnah’s dreams, as treachery upon the nation. In the mindful dismantling of institutions, their autonomy and accountability. In the knocking down of pillars that hold up what figments still remain of democracy. In the manner of the disembowelling of the media — traditional, digital, social — through amplified disinformation, fakery and whataboutery, through upscaled exclusion and intimidation, through excessive and, often, prejudiced use of punitive laws. In the use of violence, exercised both by the State and the street, as a tool against adversaries. In the deliberate and methodical distortion and rewriting of history. In the stated and unstated intention of avenging perceived or propounded wrong. In the manner they assume and display pride in their respective bigotries — ethnic or sectarian or social — and sanction divides they have often themselves riven. In the way they have reinvented their pasts, no less. Putin is notorious for dictating biographies of himself; fair bits of what he claims happened in his earlier life have not stood up to scrutiny. The Modi tales are as myriad — told in the tongues of crocodiles, on railway platforms, in degrees nobody has yet set sights on.

Is it a thing of surprise that Vladimir Putin excites the genus that has come to be known as Bhakt? It sees in him what it wishes Modi to someday become — the master of a far larger stage, a far larger nation, a far larger army, a far larger ambition. And, of course, a far larger threat, a bigger bully. The world’s attentions are rightly riveted on Ukraine; perhaps that should also inspire Indians to pay a little attention to India.