The outrage against Qatar 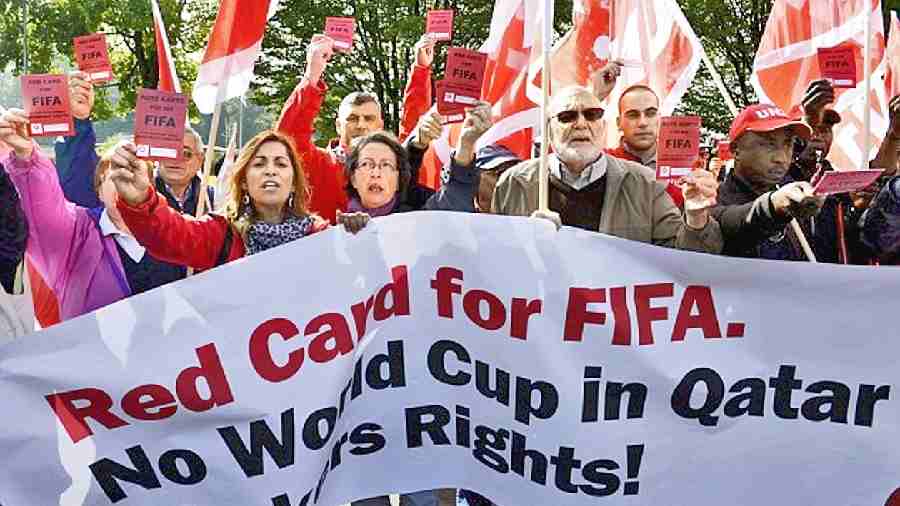 There is something to be learnt about football in particular and the world at large by trying to understand the drivers of this outrage regardless of where we might stand on Qatar’s claim to the Cup
Mukul Kesavan   |   Published 27.11.22, 03:01 AM

Why has the World Cup in Qatar occasioned such outrage? The obvious answers seem to be (in no particular order): the Qatari state’s outlawing of homosexuality, its inhuman treatment of migrant labourers, the subordinate status of women in Qatar under sharia law, the fact that Qatar in the 21st century is an absolute monarchy run by a family, the absence of freely available lager in Qatar’s football stadiums, the disruption of Europe’s football season caused by the rescheduling of the World Cup, Qatar’s lowly status as a football nation and even its clumsy bid to pay European fans to turn up at the opening ceremony and supply upbeat social media posts.

Qatar and its apologists like Fifa’s president, Giovanni Infantino, have accused critics of racism and Islamophobia in a faintly absurd attempt to mobilise political correctness in the Qatari cause. The Economist has just published a defence of the decision to allot the World Cup to Qatar where it makes the point that Qatar is far from being the worst offender amongst states on most of these counts. It cites Russia (the host of the previous World Cup) and China (which hosted the 2008 Summer Olympics and the 2022 Winter Olympics) as states more intolerant of dissent and human rights than Qatar.

There is something to be learnt about football in particular and the world at large by trying to understand the drivers of this outrage regardless of where we might stand on Qatar’s claim to the Cup. One reason for the storm of criticism is the nature of news: any world event is likely to become a lightning rod for people who feel strongly about particular causes. People concerned about global warming will point to the environmental costs of such a massive gathering. Feminists and people committed to gay and trans rights will likewise see in Qatar’s institutionalised misogyny and homophobia an opportunity to campaign for equal rights.

But there is something about Qatar that makes these prejudices more egregious and offensive. That is the feeling that Qatar and absolute monarchies like Qatar aren’t properly modern. Saudi Arabia and the states of the Persian Gulf like Qatar, Bahrain and the kingdoms that make up the United Arab Emirates are odd in that they aren’t nations. They are petro-states run by ruling families and they lack the basic features of the nation state.

The idea of the nation is premised on the idea of a People. Benedict Anderson has taught us that the nation state is different from other states, past and present, because political legitimacy in a nation state is premised on popular sovereignty. Modern monarchs like Charles must rule in the name of Britain’s people, not on the strength of dynastic right. Even autocracies like Iran or military dictatorships like Zia’s Pakistan piously invoke their respective People.

Qatar doesn’t have a People. It has an absolute monarch drawn from a single family, the Al Thanis, who is the state. All executive, legislative and judicial authority vests in his person. What really sets the gulf states apart from other nations is that a large number, sometimes the majority, of their resident populations aren’t, and can never be, citizens. Only 12% of Qatar’s residents are subject-citizens; the rest are guest workers of one sort or another, transients by definition, regardless of how long they have been in residence.

No state that excludes a majority or even a substantial section of its residents from citizenship can be a nation. Any state that does this runs the risk of seeming to divide its population into citizens and an underclass. One reason why Qatar is so frequently criticised for treating its construction workers as slave labour even though the conditions under which construction labourers work in other countries like India and Pakistan might be as bad or worse is that its labourers are disenfranchised aliens with no rights. The temptation to think of Qataris in their stadiums swathed in spotless thobes as a predatory ruling caste battening upon the labour of invisible helots becomes irresistible. What might in a nation state populated by citizens be seen as a problem that can be fixed becomes in Qatar a disparity that defines the state.

The other reason Qatar hosting the Cup has provoked such outrage amongst football fans, players and pundits is that it rubs their noses in the long known but seldom acknowledged truth that modern football, like all contemporary sports, is for sale. They are outraged that a tiny country with no footballing pedigree can buy the right to host the World Cup. Fifa’s corruption is legendary, but it took the total disruption of the European football league calendar to drive home the brutal truth that a state needs no credential other than money to stand world football on its head. The hyperventilation over not being allowed to drink in the stadiums is a subset of this unwanted realisation. The answer to the question, ‘who are these guys to keep us from our sacred ritual of chugging lager while we watch’, is ‘they are the guys with the money’.

It’s an answer that football fans in Europe have studiedly ignored as Russian kleptocrats, American speculators and Arab sovereign funds have bought up storied clubs like Chelsea, Manchester City and Newcastle United, as Arsenal’s home moved from Highbury to the Emirates. That fragile article of faith that their loyalties are hyperlocal in a game where players and money flow across borders unchecked, where Mukesh Ambani can express an interest in buying Liverpool FC, was frontally challenged when Qatar bought and hosted football’s crowning event on its own terms.

It was a bit like the outrage provoked by Saudi Arabia’s bid to buy elite professional golf by setting up an alternative tour, the LIV Golf Invitational Series. But golf has always been seen as a rich man’s game populated by footloose professionals. It didn’t have the strong sense of place that football did... once upon a time. As community clubs and working-class teams were remade into corporate organisations in the image of American sports franchises, football’s followers had to make an effort to unsee the alienation in the room. Qatar’s real crime in staging this teetotal tournament in the desert was that it made it impossible for us to look away.