Putting muscle over mind is the party’s trademark strategy 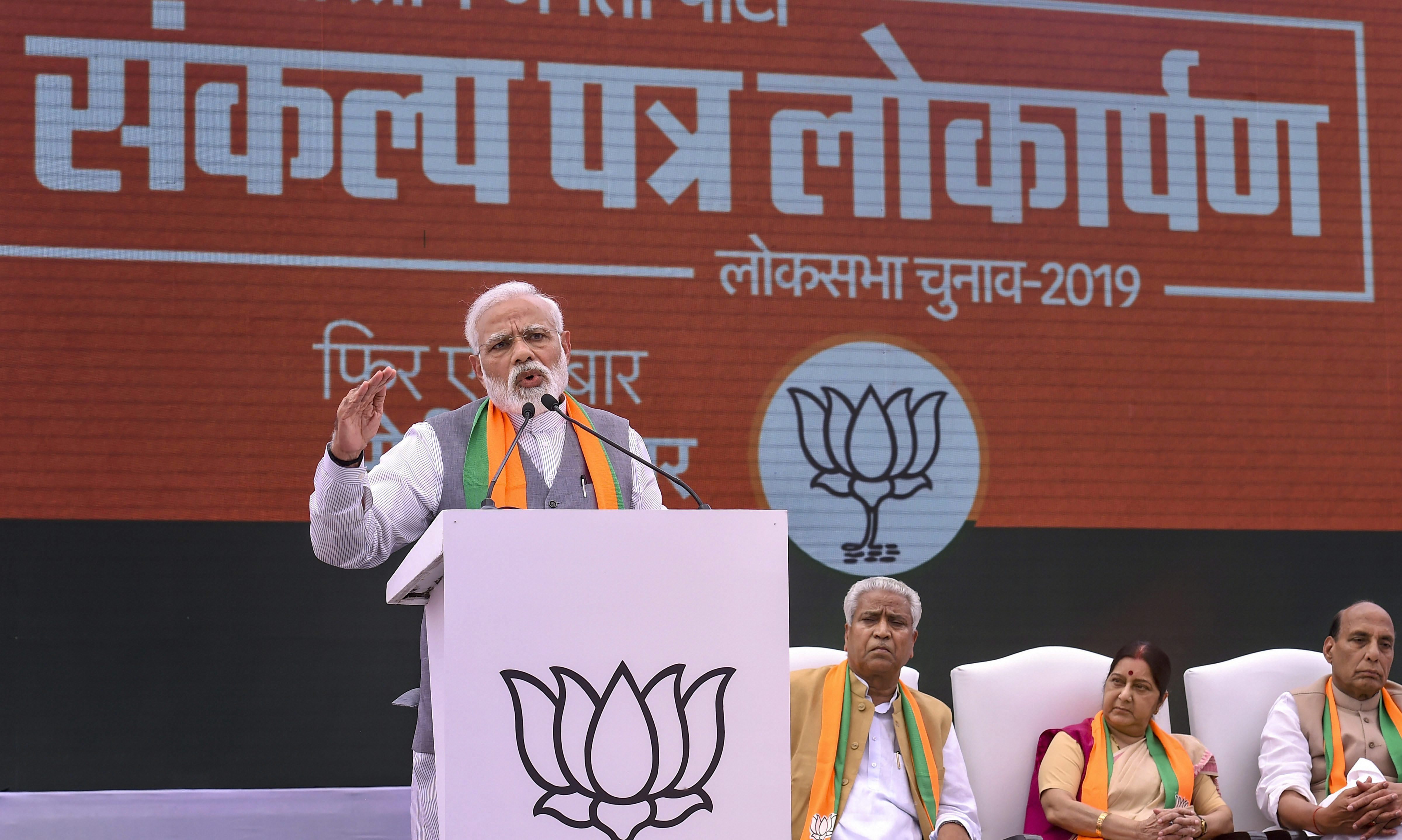 PM Narendra Modi at the release of the BJP manifesto in New Delhi on Monday, April 8, 2019. The dream making India an economic powerhouse when the debt burden has ballooned may seem ambitious. But then the BJP can always get away by saying it was a jumla - a false pledge
(PTI photo)
The Editorial Board   |   Published 10.04.19, 02:28 AM

It would be instructive to put the ‘Sankalp Patra’ — the manifesto of the Bharatiya Janata Party — to a test of performance and accountability. It is unlikely that the party and its talismanic leader, Narendra Modi, would come out with flying colours in the test. Five years ago, Mr Modi had promised to create two crore jobs annually. Yet, New India is having to contend with staggering unemployment: joblessness, NSSO data suggest, is the highest in over four decades. That perhaps explains the BJP’s decision to devote a solitary paragraph, hidden deep in the manifesto, to jobs. Unfortunately, there are other bloopers to hide. The sops for such critical constituencies as farmers, traders and the urban middle class are shorn of new ideas. The deficiency of a road map to achieve these intended targets is equally palpable. The dream of turning India into an economic powerhouse in a few decades at a time when the debt burden has ballooned would strike citizens to be particularly ambitious. But then the BJP can always get away by saying that the promise was a jumla — a false pledge.

The BJP’s commitment to a divisive and shrill nationalism should, however, not be mistaken as a jumla. Among other things, the Sankalp Patra seeks to abrogate Article 370 and annul Article 35A, measures that are likely to kindle new fires in Kashmir. There is also talk of completing and — worryingly — extending the process of the National Register of Citizens, an exercise that has been dogged by public hardship and controversy. The commitment to the polarizing citizenship amendment bill — a legislation that goes against the Constitutional spirit of accommodation — remains unwavering. Strikingly, the BJP has chosen to uphold the exclusionary tradition in the Sabarimala temple that was struck down by the Supreme Court. This trenchant invocation of authoritarianism, the vision of a party towering over people and institutions, lies at the heart of the BJP’s ideology. Unsurprisingly, it also informs its strategy to win another term in office. Little wonder then that the party president talked of the ‘difficulties’ posed by the checks and balances of a multiparty democracy. Putting muscle over mind is the BJP’s trademark strategy. Does it not make the job of peddling division as development that much easier?