Bihar polls: all about direct, indirect and hidden alliances

DELHI DIARIES : The lady in black, why Pratap Rudy and Shahnawaz Hussain are missing in action and the role of advisers 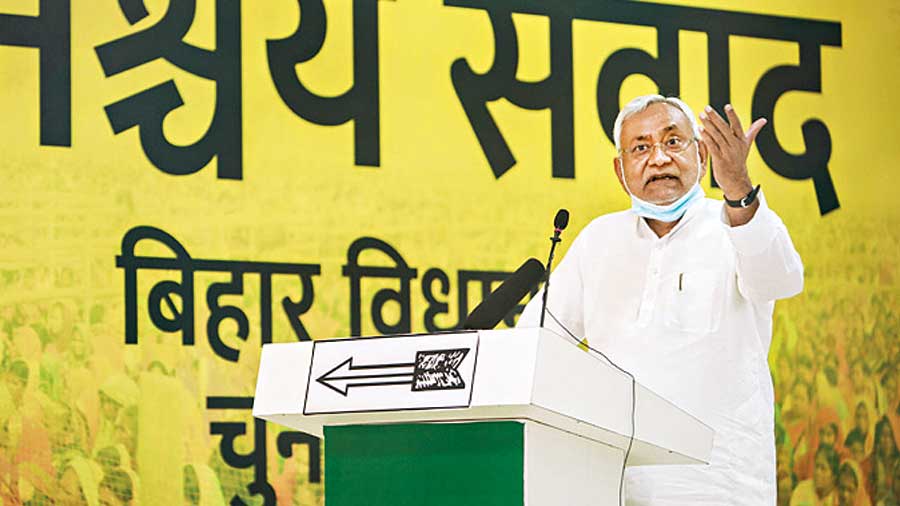 The upcoming Bihar assembly elections have generated much greater curiosity this time than ever in the past because of the multiple layers of intrigues and conspiracies that have blurred the normal fight between two straight alliances. There are direct, indirect and hidden alliances and unforeseen post-poll possibilities keeping both political players and observers confused. The capital’s political grapevine is abuzz with speculation about another somersault by an anguished Bihar chief minister, Nitish Kumar, who feels that the Bharatiya Janata Party has played a dubious game by using Chirag Paswan’s Lok Janshakti Party to harm the prospects of the Janata Dal (United).

Insiders reveal that both Congress and Rashtriya Janata Dal leaders have been discreetly trying to read Kumar’s mind and even accentuate the sense of hurt among the JD(U) workers. The Congress and RJD leaders expect Kumar to walk out of the alliance in the post-poll scenario if the BJP refuses to make him chief minister. Conspiracy theorists are referring to the Maharashtra model, where the Shiv Sena did the unthinkable by embracing the Congress-Nationalist Congress Party alliance, and wonder why the BJP leaders did not learn any lesson from that debacle. Interestingly, the former Maharashtra chief minister, Devendra Fadnavis, who is seen as the key factor in the strained relations between the BJP and the Shiv Sena, is playing a key role in Bihar as well. The turmoil in the ruling alliance with the LJP’s exit may not be the last chapter in this edition of intriguing Machiavellian politics.

One party that has managed to gain a toehold in the minds of Bihar’s voters in spite of being a complete newcomer to the state’s politics is the Plurals Party, founded by Pushpam Priya Choudhary, with the Greek mythological winged-horse, Pegasus, as its symbol. However, its name has not caught the fancy of the people. Educated last in the London School of Economics, Choudhary has declared herself worthy of the chief minister’s post. Dressed usually in black, she has been touring all over the state, and fielding candidates in almost all the constituencies in the upcoming assembly elections. Most of them are well-educated, earnest young men and women, but many of them are frustrated that the rural population cannot properly pronounce ‘Plurals’. “We have tried our best to teach the people, but they keep coming up with different pronunciations every time. At many places they just address us as ‘kariya kapra wali ki party’ (the party of the lady dressed in black). We just wonder if some Hindi name would have been more suitable in this state,” said one of the candidates. Another was worried about a situation in which Choudhary decides to sport some other colour. “And Shakespeare said naam mein ka ba [What’s in a name]. We can now answer him, naam mein e ba [This is in a name],” he spoke loudly.

Rajiv Pratap Rudy and Shahnawaz Hussain used to be two high-profile BJP faces from Bihar. They were ministers in the first BJP-led Atal Bihari Vajpayee government. Not anymore, and without even having breached the unofficial 75 years retirement age set by the current Narendra Modi-Amit Shah regime. This criterion has seen many party stalwarts like LK Advani being edged out. Rudy is 58 and Hussain just 51. Their marginalization got highlighted recently when none of the two figured in the list of 30 BJP campaigners for the Bihar polls.

While Rudy is a Lok Sabha parliamentarian now after having been dropped as a minister, Hussain does not even have that. Since he lost the 2014 Lok Sabha polls, he has been waiting on the margins. Hussain was offered a ticket to contest the Bihar polls from Bhagalpur, insiders said. Running for a legislative assembly seat after having been a member of parliament and a Union minister was no less than having salt rubbed into his wound. The pain of being in the wilderness had pushed Hussain to accept the offer, but he finally refused, according to whispers in the BJP corridors. Many, however, feel his refusal was owing to ground reports suggesting that he could lose.

Politics is as much about man management as it is about taking the right decision at the right time. The Arunachal Pradesh chief minister, Pema Khandu, has yet again displayed his timely managerial skills by appointing as many as 22 members of legislative assemblies as advisers to assist ministers in the smooth functioning of the government and early completion of projects.

Government observers feel that the appointments and allocation of additional portfolios to his ministerial colleagues suggest that Khandu was either under pressure or wanted to check any sort of power tussle by accommodating these MLAs in the ‘power structure’. The size of the council of ministers in the 60-member state assembly cannot exceed 15 per cent. And since the appointment of parliamentary secretaries could attract the attention and axe of the judiciary, as was seen last month when the high court of Manipur ruled the appointment of 12 MLAs as parliamentary secretaries unconstitutional, Khandu chose the adviser route, that too at ‘no’ financial cost to the state exchequer.

The crowd waiting for the arrival of Nitish Kumar to address the election rally at Tarapur heard the blades of the helicopter and became excited. But the helicopter brought a virtual cyclone, destroying the tent erected for the audience. People panicked and the administration had a tough time preventing a stampede. During Kumar’s address, sections were busy discussing whether the contractor did a shoddy job despite taking money. “All the roads, bridges, embankments, drains and other infrastructure works suffer from this syndrome,” a voter quipped.