The larger symbolism of Lachit Borphukan 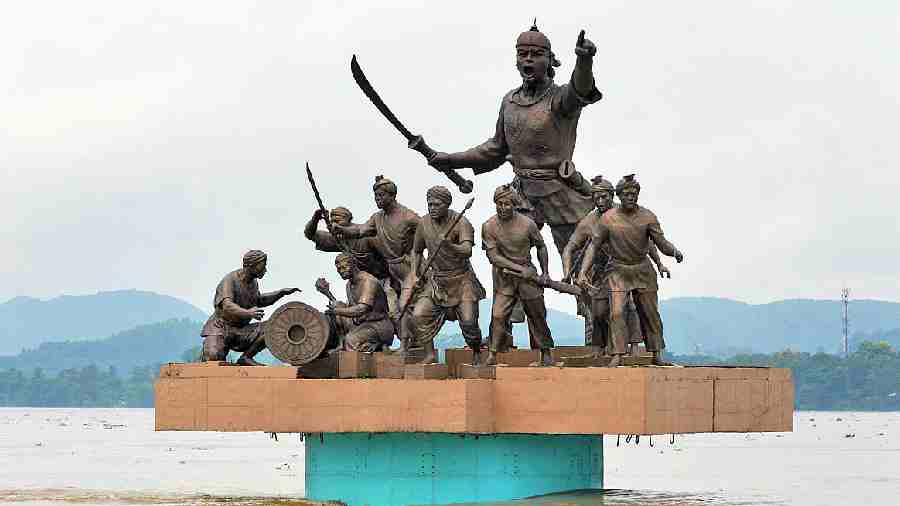 The belief that history or, more accurately, the writing of history stands still and is cast in stone is both naïve and untenable. As much as historians may debunk the temptation of reading the past in the light of the present, the reality is that each generation reshapes history in the light of contemporary perspectives. This is as much true of antiquity as it is of relatively more recent developments.

India is a land where the past is constantly being reviewed. A recent circular by the University Grants Commission, advising institutions of higher learning to observe Constitution Day as an occasion when India reclaimed its democratic heritage dating back to the janapadas, occasioned many snide comments from historians who seem loath to allow amateurs, not to speak of politicians, intruding into their turf. Antiquity apart, the advent of the Narendra Modi government in 2014 has witnessed significant changes in the projection of India’s national movement. The elevation of Netaji Subhas Chandra Bose to new heights — including the installation of his statue in the canopy overlooking Delhi’s iconic India Gate — was calculated to suggest that the freedom struggle had multiple strands and was far richer than the overemphasis by earlier Congress governments on Mahatma Gandhi and Jawaharlal Nehru. Likewise, the deification of Sardar Vallabhbhai Patel — including the creation of the world’s tallest statue in Gujarat — was aimed at suggesting that post-Independence India was offered alternative routes of development in 1947 which, unhappily, were not pursued.

It is in this context that the grand celebrations to commemorate the 400th birth anniversary of Lachit Borphukan may be viewed. This Assamese general of the Ahom kingdom won a famous victory over the advancing Mughal army of Emperor Aurangzeb in the naval battle of Saraighat in 1671. Although the history of the Ahom kingdom, which lasted until the British conquest in 1826, is replete with both victories and defeats against invading foreign armies, the battle of Saraighat and its architect, Lachit Borphukan, occupy a key place in Assam’s collective consciousness, so much so that a separatist group opted to name its militia Veer Lachit Sena. Lachit Borphukan, the 15th-16th  century religious and literary figure, Srimanta Sankardev, and the 20th-century nationalist leader and Assam’s first chief minister, Gopinath Bordoloi, constitute the three icons on whom modern Assamese identity is based.

Yet, it is unfortunate that all the three names resonate only in Assam or, at best, in the Northeast. Their importance in the making of India is scarcely appreciated in the rest of India. Lachit Borphukan was a contemporary of Chhatrapati Shivaji and his victory in Saraighat initiated a process of resistance that, with numerous ups and downs, culminated in the final ouster of the Mughals from the Ahom kingdom in 1682. However, while independent India has honoured Shivaji far beyond Maharashtra, Lachit Borphukan’s stellar role in the national resistance to the Mughals is known only in Assam. Some modest progress was made in 1999 when the National Defence Academy in Pune instituted a gold medal in his name that is awarded each year to the best cadet. But overall, Lachit Borphukan has suffered from the condescension of historians who have written their own version of Empire history of the Mughals. This week, to complement the celebrations in Assam, there will be events in Delhi, to be attended by both Prime Minister Narendra Modi and the home minister, Amit Shah, to showcase Lachit Borphukan to a national audience.

The chief minister of Assam, Himanta Biswa Sarma, who has taken the lead in organising the 400th anniversary celebrations, was quite explicit in stating its larger purpose. “For long, Indian history has been about the conquests and glory of the Mughals as if they were the rulers of entire India. They could not conquer the Northeast or vast areas of southern India. We are celebrating Lachit Borphukan’s anniversary in Delhi so that the world gets to know that there were many heroes and kingdoms who defeated the Mughals.”

The trend may well be gathering momentum. In central India, the local folk memory of Rani Durgavati of the Gondwana kingdom who played a heroic role in resisting the advance of Akbar’s armies is being elevated to the status of formal history. Jabalpur University has already been renamed after her. Additionally, there is a concerted move to ensure that heroic and inspirational figures from history belonging to subaltern communities are given due recognition in the pages of history books. Like the bid to delineate the linkages between Kashi (Varanasi) and Tamil civilisation, there is an unending endeavour by the Modi government to enlarge the scope of history and use it to promote the idea of India’s civilisational unity.

In the case of Lachit Borphukan, there is an additional dimension. For very long, Assam and the northeastern states have experienced both a political and emotional detachment from national politics. This, coupled with the lack of sufficient understanding of the historical specificities of each region, was a principal factor behind the spate of insurgencies that affected nearly all the states. The mollycoddling of corruption as a way of co-opting local elites also took a huge toll, as did the indifference to investments in infrastructure, allegedly for ‘strategic’ reasons.

Since assuming office, the Modi government has been in a rush to make up the infrastructure deficit and ensure the Northeast’s connectivity with the rest of India. Additionally, India’s Look East foreign policy and better relations with Bangladesh and Myanmar could yield instant results, especially if Chittagong port opens up to the India trade. Most important, however, the decision to earmark at least 10% of Central spending for the Northeast is a game-changer for a region that has always felt shortchanged. Finally, in political terms, the growing importance of Assam and the Northeast in the ecosystem of the ruling Bharatiya Janata Party marks a new beginning for the region.

There has been a mood shift in Assam and in the Northeast that is visible to all. The Lachit Borphukan celebrations are more than symbolic precisely because it takes place on the back of a larger transformation.