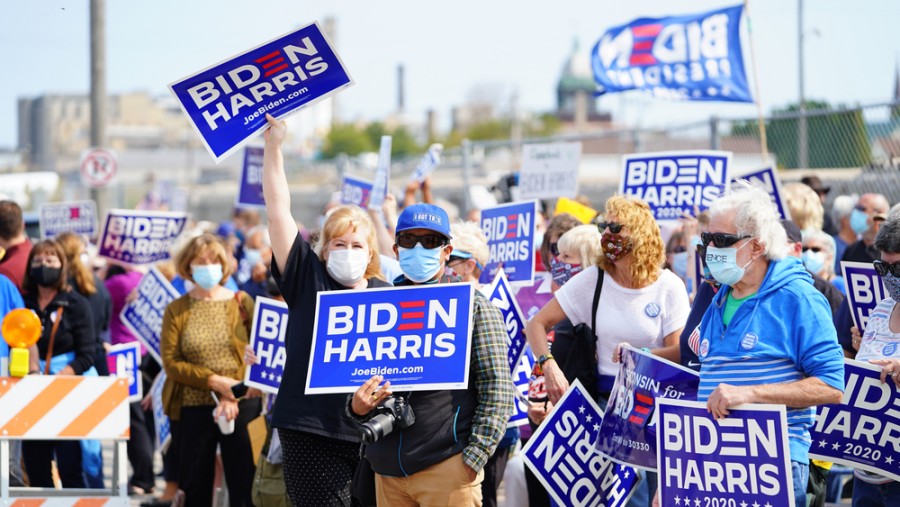 Even if the Democrats fail to turn a single policy plank into law, their defeat of Trump will count as an extraordinary achievement.
Shutterstock
Mukul Kesavan   |   Published 08.11.20, 01:19 AM

Why won’t Democrats take yes for an answer? After being scared out of their wits by the opening night of America’s mad election, you would have thought that Biden’s return from the dead would have been the cue for boneless relief and celebration, but no. As Wisconsin, Michigan, Georgia and Pennsylvania first teetered and then fell for Biden, their mounting horror at the prospect of four more years of Trump was replaced by recrimination and self-criticism. What became of the Blue Wave? Where was the Senate majority that would have given Biden the Congressional muscle to legislate his programme? How would Democrats deal with the loss of state legislatures that would allow Republicans to gerrymander constituencies, ratify conservative judges and generally thwart the liberal agenda? Why don’t metropolitan progressives like AOC and the Squad shut up about socialism and climate change and the Green New Deal and all the other stuff that frightens Middle America?

When did contemporary liberals become so overwrought and anxious? They should take a moment and do what normal people do after winning. Gloat. Gross Goliath is fallen. The Unspeakable Hulk is gone. Old Orange Tan is to be extracted from the White House and relocated permanently in his natural habitat, the Dark Web’s dense undergrowth. And there he will rage and drag his knuckles and beat his breast and pout and no one, not even Fox News, will care.

Actually, that’s not true. The leader writers of the feral right will be orphaned. In the spirit of anthropological inquiry, I spent the months leading up to the election reading the opinion sections of The Wall Street Journal and the National Review. It was fascinating to watch these pillars of the Right swaddle Trump’s narcissism, racism and naked self-interest in ideologically labelled diapers: Tax Cuts, the National Interest, Conservative Judges, China, Biden’s Woke Commies, the Mortal Threat to Fracking, the Right to Life or the Imminent Death of the Second Amendment. The spectacle of these well-upholstered pundits trying to harness this lewd, lying bigot to their cause was disturbing then; with Trump toppled, it is merely grotesque now.

This is why Trump’s defeat is, or ought to be, so cheering. It makes no difference whether Trump loses by one electoral college vote or a hundred. The modern executive is such a political prize, its power to set the national agenda is so massive, that it can make the vilest political ideas and policies respectable. We have seen this in India. The Central government has passed a citizenship law that creates a religious test for citizenship. The chief minister of one of India’s largest states plans a law to prevent inter-religious marriage to stop allegedly predatory Muslim men from battening on innocent Hindu women. Two absolute majorities for Narendra Modi have transformed whispered bigotry into trumpeted policy.

Even if the Democrats fail to turn a single policy plank into law, their defeat of Trump will count as an extraordinary achievement. A second term would have been read as a public mandate for the menu of prejudices he had served up through his first four years. The furthest reaches of the Right — the armed militias, the QAnon anti-Semites, the white nationalists, the climate change deniers — would have merged themselves into the political mainstream. Now that he has lost, the Proud Boys won’t have the president as their scout master, the Bannons of the world won’t have a proxy in the White House, the common or garden racist or the think-tank Islamophobe won’t strut his stuff in the way he did when POTUS was his soulmate.

Biden’s victory creates the space to inspect the rottenness of the political Right. Political success in modern democracies is its own justification. Trump’s win in 2016 allowed the Republican Party to channel its inner Bajrang Dal, it allowed the GOP’s base to wallow in its baseness. So long as he was president, this new pride in prejudice was worrying, even formidable. But with Trump dethroned, rabid isn’t sexy any more. The spectacle of Rudy Giuliani, the once formidable mayor of New York, devolving into the president’s dogsbody was embarrassing when Trump was in office; it seems like suicide now. To watch Jared Kushner, till yesterday the American Architect of Middle Eastern Peace, flailing about and failing to stop Fox News from calling Arizona for Biden is to know how pallid creatures of the night are made plausible by their proximity to power.

Trump’s narrow defeat has inevitably produced two bits of faux insight. The first is the notion that Middle America didn’t vote for Biden because they saw him as a Trojan Horse for the party’s progressives. A corollary of this argument is that Alexandria Ocasio-Cortez and her Squad, along with the Armies of the Woke, cost the Democrats a more decisive presidential win and the down-ballot Congressional races. Democrats should ignore this. If the margin of victory had been massive, if Biden had won by 400 electoral votes, this too would have been marshalled as evidence that progressives needed to stand down because Biden’s landslide was clearly a triumph of moderation. An argument that goes heads you lose, tails you lose, isn’t insight; it’s propaganda.

The second ‘insight’ is familiar to Indians. It is the argument that given the scale and vehemence of Trump’s electoral base, victorious Democrats need to be solicitous of its sensibilities. You could be forgiven for thinking that nominating a white moderate from the rust belt as the Democratic Party’s presidential candidate might have covered that, but you’d be wrong. The point of this argument is to absolve the Republican base of racism by sublimating it into something worthy, like resentment at economic neglect and cultural condescension. Indians will recognize this argument as a close cousin of the notion that Modi’s popularity makes majoritarian hostility towards minorities a politically respectable attitude that the Opposition parties should pander to. It is one thing to be swayed by this bogus argument when you are backed up against a wall by a political juggernaut (the plight of non-feral parties in India); quite another to pay it any attention after you have won the biggest prize in American politics.

In contemporary democracies, parties of the centre or the left defeated by right-wing strongmen like Trump, Duterte, Orbán, Modi, Rajapaksa or Bolsonaro know that they have to persuade some part of their base to switch sides. So they have to assume that people can vote for bigots without being bigots themselves. But this doesn’t mean that liberal parties begin to remake themselves in the image of their opponents. No matter how successfully Trump galvanized voters with talk of rapist illegals from Mexico, Democrats can’t go there. To durably defeat a malignant populist, liberals need to spell out a benign populism.

That is where the Democrats are today. As Chris Hayes pointed out on MSNBC during the long count, they could start by celebrating a famous victory and leave the task of spinning it as a defeat to Trump’s disgruntled Republicans. The Democratic Party has defeated a villain too monstrous for a Batman movie in real life and it has done it through electoral due process. That’s an exhilarating win for liberals and democrats everywhere. It’s morning, and not only in America.

From one lie to another