Berlin is high on a heady cocktail of cinema

The Berlinale has just started, and it's best to pace oneself 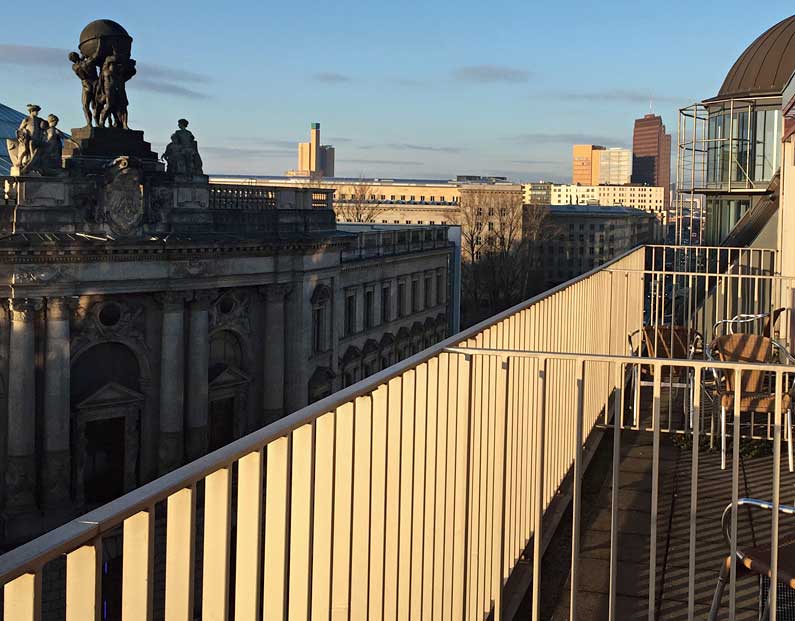 Central Berlin: More recently, various Calcutta and Indian non-fiction and feature film-makers have been invited to show their work at the Berlinale.
Source: Ruchir Joshi
Ruchir Joshi   |   Published 12.02.19, 02:09 AM

The Berlinale, or the Berlin International Film Festival, has been a happy tramping ground for Calcutta film-makers for a long time. Over the decades several directors from our city have made their way into the core of the northern European winter, braved the snow, sleet and sub-zero temperatures to show their films and see what the rest of the world has to offer. Mrinal Sen, who so recently left us, was a regular visitor over the 1970s and 1980s. More recently, various Calcutta and Indian non-fiction and feature film-makers have been invited to show their work, plus critics and other cinema people also having been invited to participate in the various editions of the festival, most often by the Forum section of the festival which shows alternative cinemas of different genres and vintages.

As I’ve been told, the famed German efficiency kicks in about a month before the actual festival. One by one people from different departments of the Forum contact you on email, listing what is required from you and what they will deliver. Travel arrangements, visas, hotel bookings, the stills from your films, the synopses they require and the catalogue notes they themselves will write, the schedule and locations for the screenings, all these things start to fall into place, one by one, without any of the fuss and panic and last moment make-do that you get from festivals from other cultures. At the same time, there is no sense of unnecessary pomposity or formality; when you finally meet the people with whom you’ve been communicating they are the most down-to-earth, cheerful crew, working their skin off to make this huge section of the festival work smoothly.

There is of course the central programming pillar of the big feature films in the competition and major fiction directors’ retrospectives and the first invite, to the opening gala party, gets you into a glitter-cosmos, complete with the red carpet, paparazzi, TV crews and stars. As you stagger away, reeling from jet-lag and photo flashes, you are handed a return present of a small goody bag from L’Oréal, one of the major sponsors. The next day business starts in seriousness, as people collect their passes or tickets and the various venues get filled up with viewers.

There is, first of all, the cluster of commercial cinemas around Potsdamer Platz as well as the cinemas of Arsenal (Kino), the institution that works towards presenting alternative cinema and also restoring and disseminating older films from around the world. In the Wedding area there is Silent Green (named after Soylent Green, the futuristic American thriller from 1973) where an old Freemason-run crematorium has been transformed into an arts and cinema centre. Here, the prayer hall from where bodies would once be lowered into the vaults below is now turned into a beautiful small, two-tiered cinema — a place where, among other works, older, restored films are raised out of the crypt and back into the light of projection. As a small audience watches, the Calcutta of the early 1990s comes to life once again, followed by a South African film in which we find ourselves in contemporary Durban.

In another section of the building is the Savvy Contemporary gallery, where my friends, the film-makers Ritu Sarin and Tenzing Sonam, have created an immersive exhibition-installation called Shadow Circus, a show which takes off from the documentary Sarin and Sonam made about the CIA’s involvement with armed Tibetan resistance against the Chinese from the mid-1950s to the mid-1970s. Moving through the video interviews, vitrines with objects, silk maps and photographs, you are plunged into the bravery and futility of the guerrilla groups who fought against the Chinese for twenty years before the ruthlessness of geopolitics led to the CIA abandoning the fighters to various fates, from biting cyanide capsules, being killed or captured and tortured by the Chinese to being thrown into jail in Nepal.

The weather is not as bad as it could be but it’s still pretty cold, occasionally rain spits down, and the chilly wind from the steppes is often at your elbow like an unwanted companion. None of this deters a long queue of people lining up at Kunst-Werke, the art space in central Berlin, to see an exhibition connected to the festival. There is no free booze or snacks, the show is apparently a difficult one, and yet the young crowd waits patiently, filing in as the space allows. This would be something unimaginable in India, or let’s say as yet hard to imagine.

What is less hard to imagine taking place in India is the gala premiere the next evening at Friedrichstadt-Palast, the big glitzy theatre on Friedrichstrasse. People start lining up at the doors an hour in advance. Some just queue to get inside while more worshipful souls crowd around the cordoned corridor of red carpet at the main entrance. Most of the crowd is desi but not all of it — there are many others too, who are fascinated by the phenomenon that is seen to be radiating out of India’s major metropolis on the coast of the Arabian Sea. As we file in, the parking police are gleefully wrapping steel chains around mis-parked cars on the side streets next to the theatre and yanking them up into trucks. Entering the gigantic old theatre the mêlée resembles a rush at an Indian cinema far more than any orderly entry in that one usually sees here in Europe. With some satisfaction I note again that not all the people doing the shoving and pushing are desi — put anybody in a certain crowded situation with scarcity attached, whether of buses, trains or cinema seats and they will act in a certain way regardless of culture.

We all settle down and wait for the stars to arrive. They come a bit late, are held up at the red carpet for photos and autographs, and then they are in the hall. The audience is up, roaring. The world premiere of the film begins, the image spreading across the screen that feels like it’s the size of a small football field. Suddenly we are in Bombay, in Dharavi, and there is Ranveer Singh and then there is Alia Bhatt, not only sitting in the audience but now also giant-sized on the screen.

For the next two-and-a-half hours, with no interval, there is a jugalbandi between the audience and the screen, screams, laughter, tears, shouted instructions to the characters not to be unfaithful to their true love, everything in full masala Hindi film mode. This is not the place for a review of Zoya Akhtar’s Gully Boy, suffice it to say that in my group of Indian alternative film people, those of us who had planned to watch about half an hour before slipping out for a drink were completely unable to move away, such was the entrapping force field created in that movie hall. At the end of the show the crew were introduced. Ranveer Singh did his rap, Alia Bhatt looked absurd but happy in a lime green dress with a train, the audience once again went wild.

Outside after the show, Berlin was still buzzing at midnight. As the hordes of desis drove home, other people were still in the bars, drinking. The underground trains were still running as they do all night, every night. Our group went into a bar for a quick goodnight drink, but no more. It had been a good first weekend but the Berlinale was just starting — there were another six days to go and it was best to pace oneself.

A Calcuttan shares her Berlinale Experience with t2