For the BJP, the opportunity cost of preserving its electoral dominance is higher than that of legalizing minimum support prices 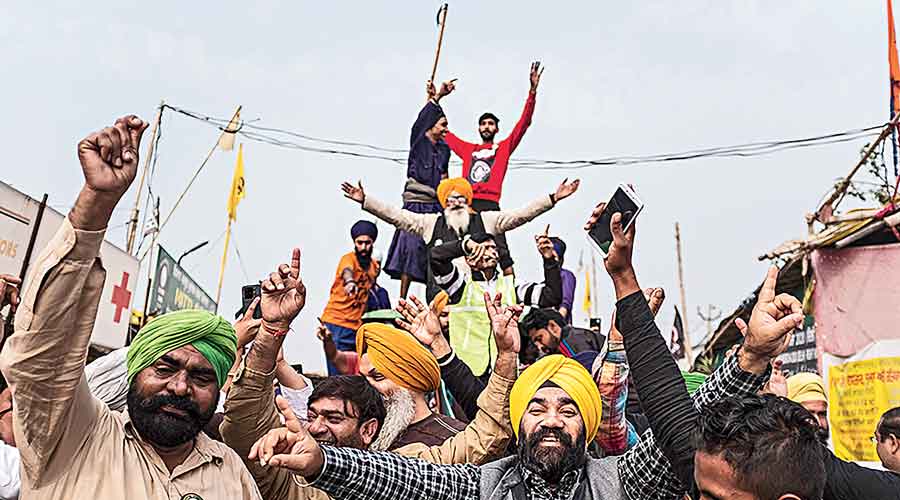 Farmers’ unions called for a jubilant end to their peaceful protest. The battle had been won even before the farm laws were repealed. This is because the protest had forged social solidarity between peasantry and civil society. A common template for struggle under the umbrella of the Samyukt Kisan Morcha led to a robust mobilization against a commoditized agricultural economy.

The legislation of the three farm laws in Parliament without debate and their dramatic repeal — again, without discussion — marked a decline in conventional parliamentary practices. The collective protests by farmers were not sporadic in nature: they were a critical response to the structural exigencies of a globalized, neoliberal capitalism. The State’s submission to collective action has demonstrated democratic buoyancy for the first time since 2014.

Historically, farmers’ mobilization has influenced regional and national politics. Social movements with a transformative agenda have to create a distinct space for themselves within existing power structures. Any meaningful participation in decision-making would lead to the de rigueur leap from mobilization to institutionalization. The peasantry as a class has faced socio-economic peripheralization, political disempowerment and cultural oppression. The sustained mobilization by different farmer organizations has conscientized the peasantry to a large extent. This can become an appropriate means of redefining their identity as an important political force in India. At this critical juncture — assembly elections are imminent in Punjab, Uttar Pradesh and some other states — any reliance on the benevolence of the political leadership or ambivalence towards electoral politics can be costly for the movement.

The theory of opportunity cost is at play here. For the Bharatiya Janata Party, the opportunity cost of preserving its electoral dominance is higher than that of legalizing minimum support prices. Being agriculturally predominant, the farmers of UP and Punjab were largely affected by the farm laws. Thus, the farm protests saw large-scale participation of farmers from UP and Punjab. The gradual but steady inroads by the Opposition into the farmers’ movement as well as the explicit support to the protest by some parties caused anxious moments for the BJP whose political supremacy had been unchallenged. Twelve Opposition parties, including the Congress, the Trinamul Congress, the Left, the Samajwadi Party, the Nationalist Congress Party and the Dravida Munnetra Kazhagam, had issued a joint statement to the Centre to repeal the farm laws and ensure legal entitlement for MSP. The Aam Aadmi Party hopes to win Punjab by indigenizing its governance model in Delhi and taking into consideration agrarian reforms in the state.

The BJP’s electoral stakes are high in the two northern Indian states. Doing well in Punjab and Uttar Pradesh would be decisive to further consolidate its political power and its ideology before the next parliamentary elections. On the other hand, a dip in support for the BJP could strengthen the idea of an anti-Right coalition in 2024. That is a risk that the BJP would like to avoid given that the Congress is striving to reinvent itself in Uttar Pradesh under Priyanka Gandhi even as the SP gears up to bag the state. The possibilities of an alliance in Punjab and Uttar Pradesh will be a game changer if the farmers’ unions were to contest elections — as is now the case in Punjab — or commit their support to any political party.