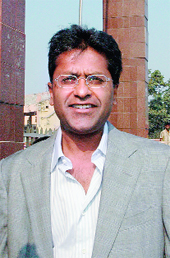 Jun Wang, a Chinese palaeobotanist, is a lucky man. His luck is best described by Mara Hvistendahl in an article she wrote in 2012 in the Proceedings of the National Academy of Sciences: "Black dust swirls across a gutted, wind-whipped land. Here at an open-pit coal mine in Inner Mongolia, sooty dogs skulking nearby cringe at the blasts as coal seams are opened up for extraction. Few landscapes are as bleak as this one, but to Wang Jun, these desolate pits in the Wuda basin are a lost paradise: Sandwiched between the coal layers is the imprint of a lush forest from the Early Permian period. Prowling the mine with a pickax, Wang, a paleobotanist at the Chinese Academy of Sciences' Nanjing Institute of Geology and Paleontology, is enchanted. 'I call this a "vegetational Pompeii,"' he says."

At one time long ago, huge edaphosaurus and lystrosaurus roamed in the forested Wuda basin of inner Mongolia, which had a tropical climate. Then, 298 million years ago, a volcano erupted, covering all the vegetation with almost three feet of ash. Today, coal is being mined there; the plant fossils are treated as fuel and carted away for burning. Wang was busy discovering, classifying and naming the fossils of ancient trees and creepers before the miners removed them. Grateful to Hvistendahl for the fame her article brought him, he named a fossil Aphlebia hvistendahliae after her.

After finishing her stint in Shanghai, Hvistendahl, an American journalist, went to Minneapolis. She wrote a book in 2012 about the killing of female babies: Unnatural Selection. It was a bestseller, and brought Hvistendahl fame as well as controversy. The story is well known — that families in India and China have been reducing their size by limiting the number of children by various means — contraception, foeticide, infanticide and neglect of girls. Hvistendahl brings it to life with interviews in both countries.

Recently, the same story was covered by Simon Denyer and Annie Gowen in Washington Post, who wrote, "Nothing like this has happened in human history." China has 34 million more males than females in its population of 1.4 billion; India has 37 million more males than females in its population of 1.3 billion. Of the 70 million extra males, 50 million are under 20. This imbalance is some decades old, and is well known. Its consequences are not; they are what Denyer and Gowen outline. First, men who cannot find wives are marginalized, especially in villages; those who cannot marry and have children are not quite men in rural society. The girls marry those who are rich and attractive; poor and ordinary men stay single. Li Weibin, a construction worker, lives with three other bachelors in a single room; he has no hope of getting rich enough to attract a girl. Girls that get married in India are often blessed by their elders, "May you have a hundred sons." This blessing has acquired an ironic tinge. For instance, Om Pati, an old woman with seven unmarried sons, has to make so many rotis that her hands are calloused.

There are no figures of the trend in dowries, which are customarily given to Hindu boys by the girls' families. In China, the custom is for the boy to give the girl's family a bride price. In Liaoning, the average bride price went up from 40,000 yen in 1994 to 260,000 in 2013. In Sichuan, a less rich province, it went up by a mere 272 per cent. Offering a high bride price is one way of showing one's riches; another way, especially in villages, is to build an impressive house. China is known to have the world's highest savings rate; those savings include those of men saving to build a house for an elusive bride. Marriage brokers are as common in China as in India; but they are much more costly; some take thousands of yen and still sometimes do not supply a wife.

As Chinese men cannot find wives at home, they look abroad for them. Websites have come up connecting them to girls in Southeast Asia. There are tours taking single men to Vietnam or Cambodia in search of brides. Southeast Asian girls are attracted to China by the higher standard of living and a chance of getting a job. Still, some Chinese men end up spending thousands on a trip and return without a wife. Those with more money and ambition go on trips to Russia and Ukraine looking for blonde wives.

Indian men are neither so rich nor so enterprising as Chinese men, so they are confined to their own country, and mostly to their own state and caste; their chances of beating gender imbalance are more slender. So there are many more hopeless young Indians; frustrated, they take to chasing girls. They get ample lessons from Bollywood films. Unfortunately, they are generally ones whom girls would least like to marry. This is the root of the stories of collective rape and harassment of girls that fill our popular newspapers.

Millions of men without wives is an extreme consequence of gender imbalance; a more balanced development is possible, in the form of men marrying later and women marrying earlier. Guilmoto gives some calculations of the impact of a rise in age at marriage, which are in the predictable direction but not sufficient to remove the effect of gender imbalance. In any case, as the scarcity of women intensifies, women will have and will exploit greater opportunities of education and employment; they are likely to marry at an even later age, which will reduce their supply in the marriage market. Men's golden age is over, in both countries.