Advertisement
Home / Opinion / At Miami, artwork from Cheetos, banana and a white wall

At Miami, artwork from Cheetos, banana and a white wall 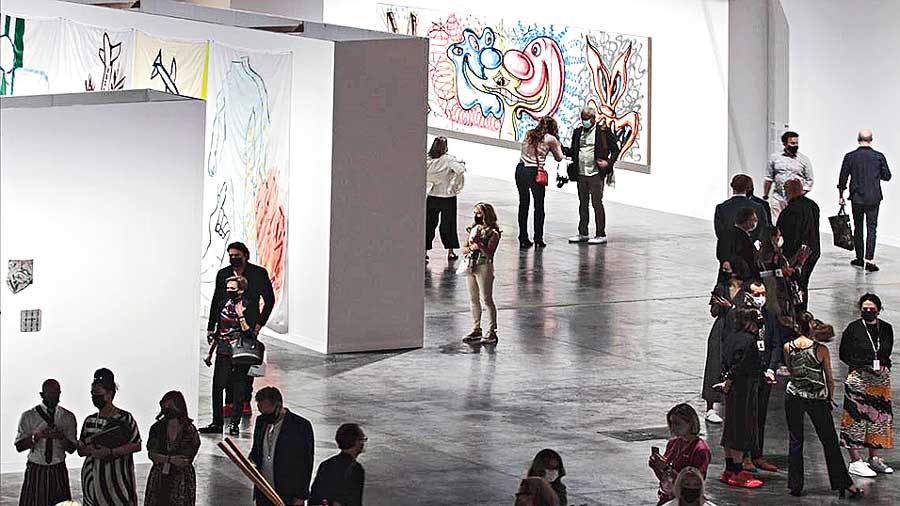 Miami hosted its annual art festival called the Art Basel, one of the most anticipated events in the fall. Artwork from over 250 galleries across the world were displayed at the event. One piece of art that is becoming the talk of the town is the artwork involving ‘Cheetle’ — the Cheetos dust left on your fingers after eating the Frito-Lay snack.

The Cheetos brand has partnered with an artist called Lefty Out There to create an exhibition hosted on a luxury yacht with Cheetos-inspired food, cocktails and live DJs. The exhibition, Yacht The Basel: The Art of the Cheetle, is scheduled to open today at a docked mega yacht in downtown Miami. There is no entry fee but the after-party is invite-only. A Frito-Lay spokesperson told Food & Wine, “Now, we’re excited to see how Cheetle — the orange dust that our fans wear proudly on their fingertips — is brought to life at Art Basel through the incredibly talented Lefty Out There’s artwork.”

Two years ago at the Miami Art Basel, an artist duct-taped an ordinary banana to a white wall and sold each of those for around $120,000. The artist, Maurizio Cattelan, is known for his absurdist artwork. Other displays at the event include sculptures, immersive art installations (including a multi-sensory experience celebrating the 100th anniversary of the perfume, Chanel No 5), paintings, other mixed artwork and even a floating film screening.

Peanut Butter and Jelly have been pardoned by the president of the United States of America, Joe Biden. They are two white turkeys raised on a farm in Jasper, Indiana and selected by the White House to participate in the annual turkey pardoning.

Biden recently underwent a routine colonoscopy procedure. During that time, the presidential authority was transferred to the vice-president, Kamala Harris. A woman became the president for the first time in American history. After the procedure, Biden performed the turkey pardoning ceremony. On the previous day, the White House Twitter account posted a video of the two turkeys on a luxurious bed at the Willard Hotel. Their names were reportedly chosen from a list of nominations submitted by schoolchildren.

The presidential turkey pardoning dates back to John F Kennedy’s time. It is a fun and frivolous event. Two presidents, Harry S Truman and Dwight D Eisenhower, reportedly ate the birds after pardoning them. The Washington Post calls it “America’s dumbest tradition” for obvious reasons.

Americans celebrated Thanksgiving on Thursday, November 25. Last year, the country was grappling with the pandemic and most families stayed apart. This time, vaccinations opened up the possibility of getting together but the rise in the number of Covid-19 cases still weighed on people’s minds while deciding on how to celebrate the holiday.

While last year, health officials begged Americans not to have Thanksgiving with anyone outside the household, this year’s message was focused on getting vaccinated, boosted, tested and to be outdoors as much as possible. It is one of the busiest travel weekends of the year and the Transportation Security Administration is expected to screen as many people as it did in 2019.

The 95th Macy’s Thanksgiving Day Parade took place in New York City with 28 floats, 15 giant balloons and about 4,500 volunteers, and was viewed by more than 25 million people on television. The parade was held last year as well but without any spectators on the streets.

Several floats represented public figures, brands, icons and even travel destinations. There was a 60-foot-long alligator float promoted by the Louisiana Office of Tourism. It was also the first time a Star Wars character — Baby Yoda from The Mandalorian — got its own float.

The 2.5-mile route goes along Central Park West and ends at the Macy’s flagship store at Herald Square. Some of the balloons from past years include Astronaut Snoopy, Pillsbury Doughboy, Chase from PAW Patrol, Papa Smurf from The Smurfs, Sonic the Hedgehog and SpongeBob SquarePants.

As per tradition, the New York Public Library has released its annual list of best books of the year, hand-picked and reviewed by special committees. A press release stated that the “[c]riteria included literary merit, audience appeal, and whether titles are representative of the diversity of New York City”.

This tradition has been ongoing for nearly a century, and all the books will be available at the NYPL locations by 2022.

The iconic Staples Center in Los Angeles will be renamed Crypto.com Arena effective December 25. The cryptocurrency platform will become the official partner for the Los Angeles Lakers and the Los Angeles Kings. Other famous LA sports arenas are the Dodger Stadium, Coliseum, The Forum and Rose Bowl. The renaming was met with mixed feelings because of the historic nature of the venue. According to Los Angeles Times, it was one of the largest naming rights deals and cost over $700 million.