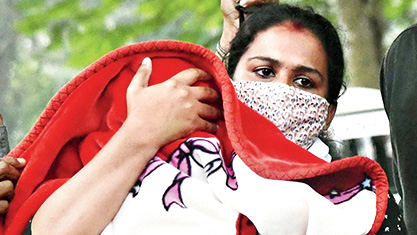 Aiden is the name Anupama Chandran gave her son when she received him after an excruciating struggle. It means “the little fiery one” with its etymological roots in Irish mythology. Couldn’t be more perfect for the one-year-old considering the fire he triggered in Kerala. It was an unprecedented agitation even in Kerala known for umpteen forms of protests. Anupama (22) had waged a relentless war to regain her baby taken away by her parents three days after he was born. Those Anupama fought against included her parents, official adoption agencies, the police, the Communist Party of India (Marxist) to which she and her family belonged, and a mob of moral trolls on social media. Her only support came from the media and civil society. Although Anupama triumphed after a month-long struggle, the incident exposed the ugly underbelly of a ‘progressive’ Kerala, scarred by entrenched elements of patriarchy, caste, and other forms of conservatism. The incident, once again, poked holes in the CPI(M)’s claim as the true legatee of Kerala’s progressive tradition.

Anupama was an SFI activist, her father a local leader of the CPI(M), and her late grandfather, a state committee member. She met Ajith Kumar (35), also from CPI(M), who was already married and they fell in love. Anupama’s parents were opposed to the affair as Ajith was already married. On October 19, 2020, Anupama, still unmarried, gave birth to a boy. Worried about social stigma, her parents took the newborn away, promising Anupama that he would be returned after her elder sister’s marriage. But the promise was not kept. In January, Ajith divorced his first wife and Anupama left her parents to live with him.

In April, Anupama filed a complaint to the local police against her parents for kidnapping her child. But no case was registered. She petitioned the state police chief and also the chief minister. Anupama called up CPI(M) leaders, including Kodiyeri Balakrishnan, a politburo member, and A. Vijayaraghavan, the state secretary, who were known to her personally. But neither the police nor the party leadership showed any interest because of her parents’ party connections. According to her, Anavoor Nagappan, the Thiruvananthapuram district secretary of the CPI(M), even rebuked her for causing “ugly” problems for her family and the party. Anupama also called up the CPI(M) politburo member, Brinda Karat, who was the first to show her consideration and directed the CPI(M) central committee member, P.K. Sreemathi, to help. Sreemathi later confessed that all her efforts had proved futile.

Anupama was shocked to know that her baby was given away to the Kerala State Council for Child Welfare, a charitable organization under the government, for adoption. In April, she called up the KSCCW and the statutory body of the Child Welfare Committee, both run by CPI(M) nominees, to complain that the baby had been given for adoption without her consent, which was unlawful. As per the Central government’s 2015 guidelines regarding adoption issued through the Central Adoption Resource Authority formed under the ministry of women and child development, a child can be declared legally free for adoption by the CWC only if it is orphaned or abandoned/surrendered by parents or legal guardians for permissible reasons.

Officials at the KSCCW and the CWC told her that they had no clue about her case. Even after Anupama made her complaint, the KSCCW registered the child in July on the website of Cara, the statutory nodal body mandated to monitor and regulate the adoption of all Indian children. In August, the KSCCW gave the baby for pre-adoption foster care to a couple from Andhra Pradesh who had registered as adoptive parents with Cara.

Four days later, Anupama reached the KSCCW and she was shown a child who was brought on the day her baby was taken away by her parents. A DNA test conducted on Anupama’s request to confirm if that child was hers proved negative in October. Meanwhile, the CWC approached the District Family Court to complete the adoption procedures. It was then that Anupama resolved to intensify her efforts and approached the media. From then the events turned dramatic as Anupama and women activists began appearing on live bulletins to narrate her trauma and put the government in the dock. A day after Anupama’s child’s first birthday, the police registered an FIR against her parents for kidnapping and wrongful confinement. This was six months after Anupama filed her complaint. It was followed by proceedings initiated by the State Women’s Commission and also the state government against the KSCCW officials. Brinda Karat and Sreemathi openly came out to defend Anupama’s right to get back her child. The CPI(M), for the first time, acted against Anupama’s father, P.S. Jayachandran, by instituting an inquiry against him and barring him from attending party activities. Yet, CPI(M) leaders continued their silence.

In November, Anupama and Ajith started an indefinite stir in front of the KSCCW demanding the removal of its CPI(M)-nominated office-bearers. The strike went on braving incessant rain, raising huge public and media response. The District Family Court stayed the adoption proceedings and the CWC ordered the baby to be brought back from Andhra for a DNA test. On November 23, the tests confirmed that the baby’s biological parents were Anupama and Ajith. The next day, the child was returned to Anupama as directed by the District Family Court.

An elated Anupama and Ajith say that although their dream has been realized, they will not rest until the culprits, including her parents, are punished for what they did. The historian, G. Arunima, summed up Anupama’s war thus: “Anupama’s courage lies in her daring to say to a deeply misogynist society that she is sexually active and that she is willing to pay the price for her defiance.”