Corruption is an everyday phenomenon 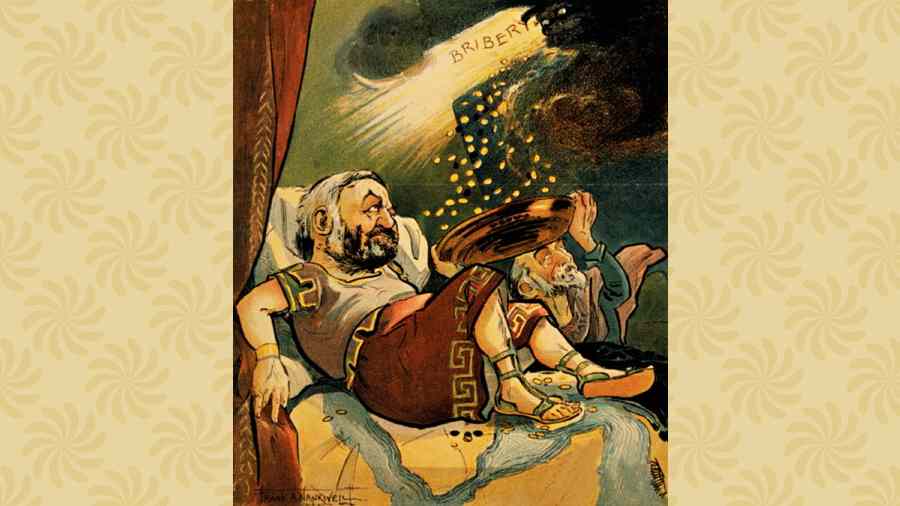 In the light of recent news headlines regarding the scam in West Bengal, I recall that sometime in the late 1980s I was taking a session on ‘Implementation Constraints in Indian Planning’ for Indian Administrative Service officers at the level of district collectors. In my opinion, corruption was one such constraint that slowed down implementation and reduced the quality of planned projects. However, as soon as I raised the issue of corruption, a lady who had been dozing in the last row stood up and claimed that I had no right to describe her as corrupt. It was a personal attack, she claimed. After she was quietened down by her colleagues, I was asked to define corruption. I was led into a conversation on the difference between what constituted an unethical action and what was culturally acceptable. The specific example discussed was that of a supervisor accepting a bottle of expensive liquor as a gift from a contractor engaged in some public works versus having a cup of tea offered by the same contractor. It was pointed out to me that if the officer did not accept the cup of tea, he/she would be perceived as an arrogant person and it would be difficult to have professional rapport with contractors. Class would come into play. It was added that in Europe the tea might be substituted by a glass of wine. I realised that day that corruption was a complex phenomenon. That is the reason why the Indian Parliament has decided to expunge the word from records of proceedings.

I also recall that when I was a graduate student in the United States of America, an American friend had borrowed ten cents from me to make a phone call from a public telephone since he did not have change. About a week later, he came red-faced to my office, profusely apologising for not repaying the dime. I told him that it did not matter and that in India we would not even bother repaying such paltry sums to friends and acquaintances. He was taken aback and asked me whether I would have been bothered if he borrowed and did not repay 10 dollars or, say, 100 dollars. I said honestly that I would. He asked me a simple question: where would I draw the line between indifference and concern?

Two lessons can be drawn from these anecdotes. First, is accepting something from a position of power — something not part of the official transaction — culturally determined? Tea versus a glass of wine. Second, does the materiality of the side payment matter? In other words, does bribing a traffic officer Rs 100 and bribing a politician one crore rupees constitute the same degree of misdemeanour? Materiality apparently does count. On the first day of the cash recovery in Calcutta, jokes circulating on social media stated that Bengalis were small fry even in theft. They did not, unlike in other parts of the country, have the courage to steal big.

The recent news about Partha Chatterjee and what he allegedly did forces one to confront a doubt: has the taking of bribe — speed money, hush money, extortion money, money for doling out favours — become culturally acceptable in all spheres of life, in every profession, and in every state in our nation? Everyone knows about its existence, it is talked about in private conversations, but if one is caught then, like an espionage agent, everyone disowns the exposed person. Materiality has also been pointed out by the press, with television commentators claiming in shrill tones that crores and crores of money have been unearthed. The sight of currency notes heaped on the floor took our breath away. During the Nirav Modi episode, where the sums involved were estimated to be much larger, the media’s decibel levels were much lower. In terms of some of the scams we have heard about in India, the sums of money unearthed so far have been much less than in other instances.

Where, then, is the core of the problem? Suppose that, for argument’s sake, an anonymous but powerful person actually did what the erstwhile minister and his associates have allegedly done. In what sense would the action be immoral and unethical? First, it was a misuse of power — the ability to give jobs out of turn. Secondly, the amount of bribe taken for each post, going by the estimates published in newspapers, was large compared to the ability to pay of those who paid the bribe. There was a terrible element of coercion. The third was the act of changing the marks obtained by candidates, thereby altering the ranks in the merit list. The money acquired could be delivered to the party coffers, or used for personal gain: the immorality involved would be the same and on all the counts listed.

The practical issues of wider concern pertain to whether what the erstwhile minister allegedly did will lead to a huge loss of face and personal reputation, jeopardise the strength of the political party that he belongs to by damaging its image in a severe way and, finally, but not the least, break the trust reposed in him by people who elected him. For a long time, there have been persistent whispers of widespread corruption indulged in by functionaries of the Trinamul Congress. Sections of the media opposed to the TMC have begun a high-pitched campaign against the government led by Mamata Banerjee, the single claim being how come the chief minister of West Bengal was unaware of what was happening so close to home? It has become a matter of partisan politics. As far as details are concerned, it appears in certain channels that the news anchors know even more than what the Enforcement Directorate does.

Such cases of gaming the system, power-abuse, dishonesty, cruelty and crime occur so often and in so many parts of India that citizens have grown immune. The media coverage becomes an opportunity for propaganda for persons or parties that one does not like or, for most viewers, a titillating thriller with enough material for gossip over cocktails. We do not get alarmed or shocked any longer. When misuse of power for political or personal gain becomes an everyday affair, corruption becomes part of the prevailing popular culture. It pervades all levels of society. It is a spectacle to be consumed.

One implication of living in a society where corruption is part of everyday living is that it helps the powers that be to frame a person or an organisation for a crime not committed, or by exaggerating the magnitude of the offence. In such a society, credibility gets thrown out of the window. Anything is possible. Everything could be an illusion. What are we supposed to believe? The biggest crime can be dismissed for lack of evidence and the alleged perpetrators given shelter by political parties. On the other hand, someone innocent might be framed and punished. Everything can be true and everything can be false at the same time. We believe what we want to. Truth becomes something manufactured in our minds. Moving on from the specifics of the latest episode in the mega-serial of corruption, one wonders who is likely to be West Bengal’s Eknath Shinde or Sanjay Raut?