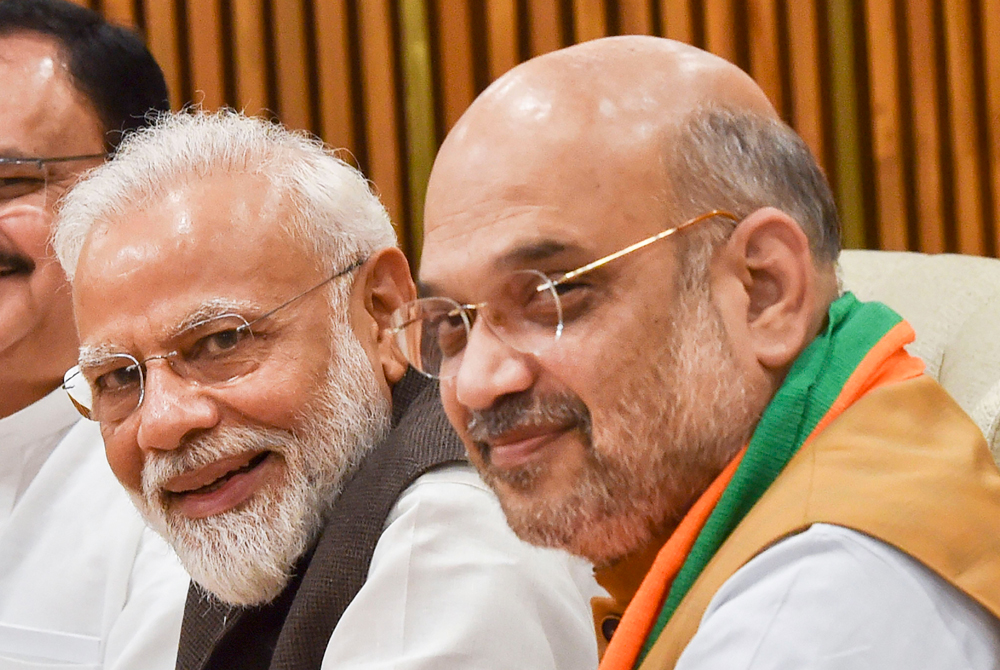 Narendra Modi and Amit Shah during a BJP Parliamentary Board meeting, in New Delhi on Monday, June 17, 2019. In a congratulatory tweet, Mr Shah described India’s triumph against Pakistan in the ongoing cricket World Cup as “Another strike” that has fetched ‘similar results’
(PTI)
The Editorial Board   |   Published 19.06.19, 04:24 AM

Sport, George Orwell had observed famously, is similar to war sans the shooting. It appears that the Union home minister, Amit Shah, shares the Orwellian perspective on cricket. In a congratulatory tweet, Mr Shah described India’s triumph against Pakistan in the ongoing World Cup as “Another strike” that has fetched ‘similar results’. Mr Shah was perhaps alluding to Indian army’s courageous operations against insurgents across the border, a theme that the ruling Bharatiya Janata Party milked consistently to win the general elections. Two points must be raised in this context. Political parties craft their own strategies to win elections. The bogey of Pakistan has proved to be especially useful for the BJP when it comes to reaping electoral dividends. Mr Shah is certainly entitled to his personal views. However, he is also one of the most influential members in the cabinet. His pronouncements in public must honour the responsibilities that are vested in the position that he occupies in the government. Aggressive rhetoric on the part of a Union minister can have serious repercussions on India’s bilateral relationship with a nation that has not proved to be a reliable neighbour. Incidentally, Mr Shah is also the BJP’s party president. That role comes laden with political priorities. However, the government and its diplomatic objectives must remain insulated from such political goals. As the home minister, Mr Shah is expected to maintain the line separating his twin roles.

The other issue pertains to cricket’s role in mending bilateral ties in the subcontinent. Although cricket has suffered on account of tumultuous politics, there are also instances of the game thawing the ice between India and Pakistan. Narendra Modi — Mr Shah’s boss — believes in unconventional approaches when it comes to resolving a crisis. Is there then a case of New Delhi and Islamabad exploring cricket’s potential to initiate a political dialogue?