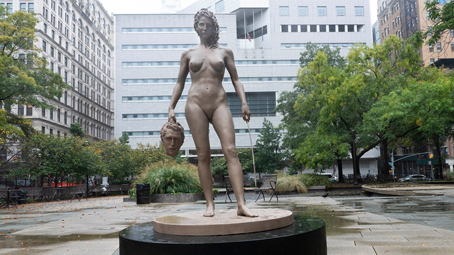 A statue was unveiled in New York close to the New York County Criminal Court — a statue of the Greek goddess, Medusa, symbolizing the MeToo movement.
Twitter/@legallysuiter1
Suhashini Sarkar   |   Published 24.10.20, 12:15 AM

A statue was unveiled in New York close to the New York County Criminal Court — a statue of the Greek goddess, Medusa, symbolizing the MeToo movement. This is the same court where Harvey Weinstein was convicted of two felony sex crimes.

The seven-feet-tall bronze statue titled Medusa With the Head of Perseus is the work of the artist, Luciano Garbati. The latter wrote on Instagram, “The place chosen is not accidental, since there they judge cases for crimes related to violence against women. We are already in the final stage working on the last details of this sculpture that became a symbol of justice for many women.” It was inspired by the 16th-century sculpture, Perseus with the Head of Medusa, by the Italian Renaissance artist, Benvenuto Cellini, which is on display in the Piazza della Signoria in Florence, Italy. The new statue, however, reverses the traditional mythology and stands as a symbol of triumph for survivors of sexual assault. The statue depicts Medusa standing tall with a low, intense gaze, with a sword in one hand and the head of Perseus gripped in the other.

According to the myth, the powerful god, Poseidon, raped Medusa, but instead of Poseidon being punished, Medusa was blamed and turned into a monstrous beast with snakes for hair, as well as a gaze that could turn men into stone. She was exiled and later hunted down by Perseus, and her head was displayed as a trophy. Garbati’s new venture was organized by the artist-led MWTH Project, in partnership with NYC Parks, and will be on view through April 30, 2021.

Halloween is around the corner on October 31, and many Americans love immersing themselves in all things spooky, including skulls and haunted houses. The coronavirus, which is still raging through the United States of America, poses a challenge to people and businesses on how to get through the day safely. According to the Centers for Disease Control and Prevention, traditional trick-or-treating and indoor costume parties, indoor haunted houses —where people are likely to scream —are listed as “higher risk.” This year, the pandemic-approved concept is the Halloween drive-through where you go in your vehicle through a land of tombstones and pumpkins for about half an hour. The ‘Nights of the Jack’ in California is offering a drive-through on the ranch promising thousands of hand-carved, illuminated pumpkins.

If you are into more immersive haunted experiences, the Highway of Horror in Chicago transformed a parking lot into a 90-minute-long terrifying experience starting October 15. First you watch a drive-in scary movie. Then you will be confined to your car for an hour-and-a-half, during which you will be spooked by zombies, demons and other ghoulish creatures prowling the premises, ready to jump, shake your car and spray fake blood against the windows.

In the Bay Area, the Fields family have operated their haunted house, called the Pirates of Emerson, for 29 years. Their home was used to create the haunted house, a major attraction drawing in thousands of visitors. Now, they have converted their 10 acres into a drive-through haunted house.

New York has finally banned plastic bags for businesses. The ban was approved back in March but got held up due to Covid-19 as well as a lawsuit by plastic bag manufacturers. The lawsuit was struck down last month and businesses were given 30 days to prepare for this change, which went into effect on October 19. The New York State Department of Environmental Conservation said that New Yorkers use 23 billion plastic bags a year, 85 per cent of which ends up as landfill. Customers at stores will be charged five cents for paper bags and a dollar for reusable bags, but will have the option of bringing their own bags.

Groups bringing forth the lawsuit said the ban would make them go bankrupt. The director of the American Recyclable Plastic Bag Alliance, Zachary Taylor, told The Associated Press that the ban was “unworkable” and it would be harder for smaller stores to acquire paper bags during the pandemic. The only exceptions are bags used for uncooked meat and fish, fruits and vegetables, prescription drugs and dry cleaning. Families who use food stamps will also not have to pay for paper bags.

Last month, the New Jersey state legislature voted to ban both plastic and paper single-use bags, as well as polystyrene foam food containers, plates, cups, and utensils, rendering it the strictest plastic ban in the US. The ban would begin 18 months after the bill goes into effect, and the governor, Philip Murphy, is expected to sign the bill. Businesses that violate the bill will get a warning on the first offence, a fine of up to $1,000 for a second, and a fine of up to $5,000 for a third or subsequent offence.

This year, in spite of the pandemic, holiday shopping has started earlier than usual. People are resorting to online and nearby brick-and-mortar retail stores owing to Covid-19. According to a consumer survey, 61 per cent of shoppers plan to begin their holiday shopping before Thanksgiving, while 39 per cent are going to wait till after. Amazon has also announced it will release Black Friday deals early this year. Some large stores are using ‘pickup lockers’ for pre-ordered items so that a shopper can come and collect them without needing to communicate with an associate. Jewellery stores are even sanitizing their diamonds and rings.

Given the economic uncertainty, and shortened family gatherings, this year shoppers are likely to buy fewer gifts as well. Shipping is also expected to take twice as long.

Chicago, for the sixth year now, has been given an ignominious title: the US’s most rat-infested city. Orkin, an Atlanta-based pest control service, ranks US cities based on the number of new rodent treatments from September 1 to August 31 of the next year. The result is a list of 50 cities, with most moving up or down each time the list is updated. Rounding out the top 10 on Orkin’s list were Los Angeles, New York, Washington, DC, San Francisco, Detroit, Philadelphia, Baltimore, Denver and Minneapolis.