Advertisement
Home / Opinion / Al-Baghdadi: the death of a reputation

Al-Baghdadi: the death of a reputation

Since he was designated caliph of the IS in 2014, al-Baghdadi has been pronounced dead several times 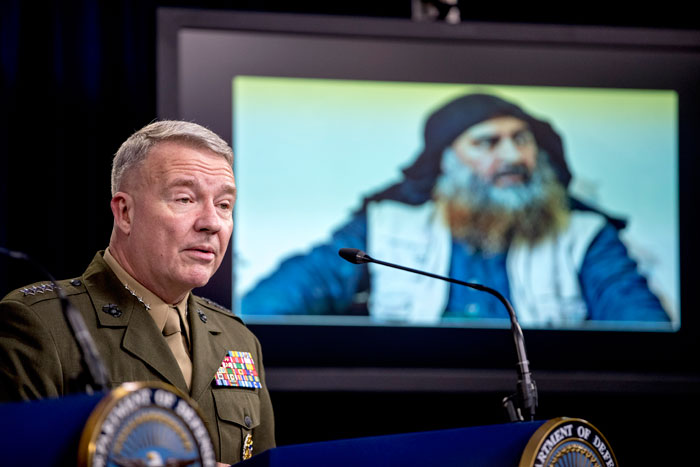 Abu Bakr al-Baghdadi is displayed on a monitor as US Central Command Commander Marine Gen. Kenneth McKenzie speaks at a joint press briefing at the Pentagon in Washington on the al-Baghdadi raid
AP Photo/Andrew Harnik
Upala Sen   |   Published 03.11.19, 12:41 AM

From the looks of it, Islamic State (IS) leader Abu Bakr al-Baghdadi is finally dead. “He died like a dog,” said POTUS Trump, and eventually tweeted that his Number One replacement had also been terminated by the US troops. The IS confirmed the death of its leader and announced that its new chief was Abu Ibrahim al-Hashimi al-Qurayshi. Very neat sounding and all one would concede, given the 'specially designated global terrorist’s' death record. Indeed, since he was designated caliph of the IS in 2014, al-Baghdadi has been pronounced dead several times.

The initial reports emerged in 2014 itself; he was said to have been killed in an airstrike in Mosul in northern Iraq. The next year there were media reports that al-Baghdadi was near dead, his spinal cord was damaged and his deputy, Abu Alaa al-Afri, was to succeed him anytime. Some months later, the Iraqi air force claimed to have bombed al-Baghdadi’s convoy while he was headed for a meeting with IS commanders. In 2016, it was first said that he had been killed in an air strike in Raqqa in Syria but those reports could not be confirmed. Some months later, it was said that al-Baghdadi and three other senior IS leaders had been poisoned, but once again no one could say for sure that he was dead.

In 2017, the Syrian state TV claimed that al-Baghdadi was dead in an artillery strike backed by the US. Russian media reported it was a Russian air strike that had done him in. Head of Russian Defence Ministry, Viktor Ozerov, stated that al-Baghdadi's death was almost “100 per cent certain”. A representative of Iranian leader Ayatollah Ali Khamenei told an Iranian news agency that al-Baghdadi was “definitely dead”. More headlines. July, 2017: IS confirms death of top leader al-Baghdadi. July 11, 2017: Isis leader killed, says Syrian Observatory for Human Rights. Drone expert and US army veteran Brett Velicovich writes in his tell-all book — ‘Drone Warrior: An Elite Soldier's Inside Account of the Hunt for America's Most Dangerous Enemies’ — that al-Baghdadi was the smartest terrorist he had ever hunted. He also said in an interview two years ago: “In my opinion Baghdadi’s already dead, he just doesn’t even know it.” Last Sunday, Donald Trump told the world: 'al-Baghdadi died after running into a dead-end tunnel, whimpering, crying, and screaming all the way… He is as dead as a doornail.”