Agriculture has a moral economy that the media lack 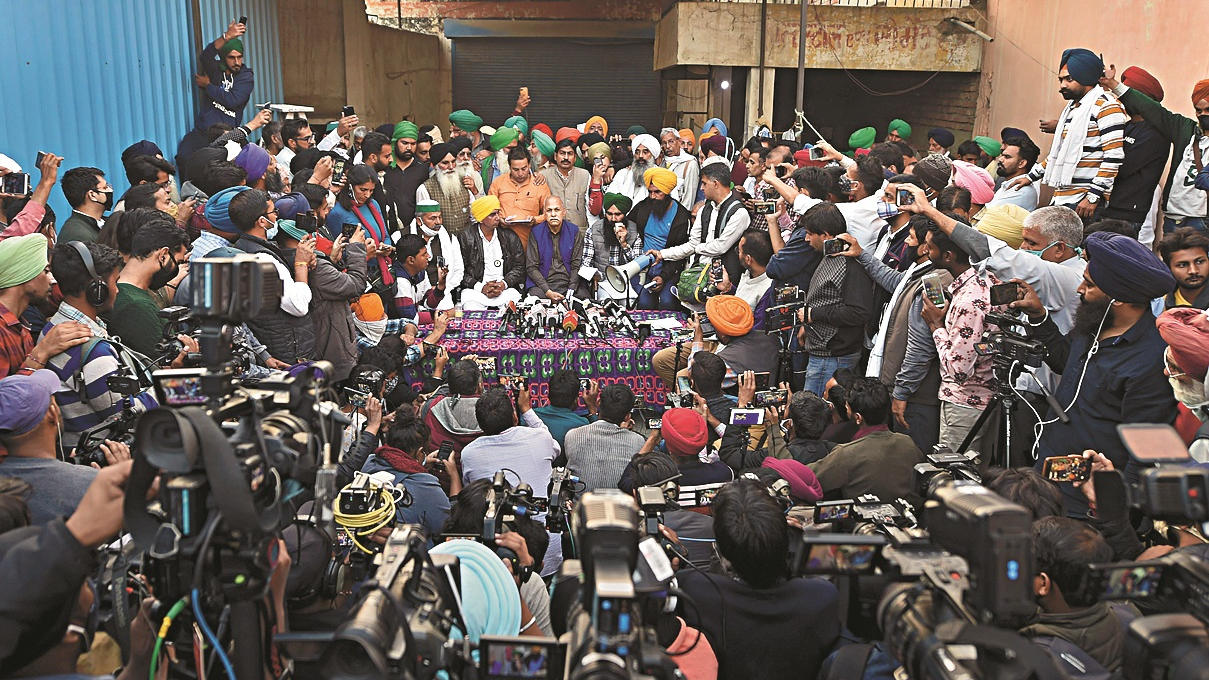 The farmers strike of 2020 as an event was a collage of multiple narratives. It tempted one to compare it to the story of the seven blind men and the elephant. As reportage, it lacked the solidity of traditional narratives. It was as if every reporter and news broadcaster, every witness, had a different reaction to the events of the week. There was consensus on only one thing. The protest this time made people nostalgic about the earlier, more legendary, protest of Mahendra Singh Tikait. That protest had an old-fashioned solidity to it. The contrast was visualized in the old portraits of leaders sitting with hookahs. They had delivered and the protest, as one observer put it, was the difference between the stolidity of the hookah and the anarchy of the cell phone. One protest created a classic linear narrative; the other almost projected a burst of distractions capturing every stereotype available.

As the farmers broke through the Singhu border, the leadership of the Bharatiya Janata Party reacted in typical style, claiming that Khalistanis and Naxalites had invaded and infiltrated the movement. The farmer by definition became ‘anti-national’ to a regime, which idolizes the cow but treats agriculture and farming with contempt.

A moment of confusion, of suspicion, triggers a moment of distraction. Bollywood enters the scene not to consolidate myth but to question the integrity of the strike. Kangana Ranaut, hungry for attention, identifies an old woman, a protester, as a professional agitator, sighted earlier at Shaheen Bagh. For once, Ranaut’s imperious petulance is subdued by the Punjabi star, Diljit Dosanjh, who demands a return to propriety. The fact that Dosanjh had donated a crore for warm clothes for the farmers added dignity and integrity to his statement. Ranaut retreats into utter confusion targeted by other stars who saw her as easy meat.

But if Bollywood was only capable of distraction, the cameo role belonged to the Canadian premier, Justin Trudeau, who, speaking on Guru Nanak’s birthday, assured his Sikh constituency that he was aware of the protest raising human rights issues. The objections of the Indian government were more like clerical interjections rather than possessing the eloquence of a convincing rebuttal.

On the other hand, Arvind Kejriwal created a sense of ambivalence by attacking the Punjab chief minister, Amarinder Singh, claiming it was irresponsible to launch an agitation in the middle of the Covid crisis. Kejriwal turned full circle by meeting the protesters and even claimed that the Narendra Modi government had put him under house arrest for supporting the farmers’ struggle.

The power and range of the struggle were obvious. It brings two other sets of political reactions. Firstly, Manohar Lal Khattar in next door Haryana tries to localize the struggle along with other stalwarts of the BJP. He contends, in fact presents weakly, that the struggle was one of Punjabi farmers and had nothing to do with Haryana.

As the days move on, one thing is clear; the struggle is acquiring the status of a legend. Farming instead of looking insulated, isolated and divided is creating a struggle that the country’s effete Opposition envied. Statements of support pour in, visits to the farmers are publicized, but it is clear that the farmers are opposing the regime. The Opposition parties sounded like a weak chorus, almost envious that they have lost a great opportunity.

The unity and plurality of the struggle are obvious. There are dozens of farming groups represented, each clear that it should be present at the negotiations. The sheer pluralism and the unity give a sense of democracy. The responses of Amit Shah and his entourage sound dour, more a Pavlovian response to a law and order problem than to a sociological and economic crisis. The BJP’s lack of imagination in handling any crisis except as a law and order problem provoked by anti-nationals is obvious. It sounds like a party that has run out of ideas.

Yet more than the State with its idiotic ideas of governance, it is television media that is uncomfortable with the farmers’ strike, seeking to discredit it in various ways. When one watches certain channels, one senses that they realize that the farmers claim an integrity in the Indian subconscious that the media lack. One senses that the media are not only losing credibility but also the trust of the struggle that distances itself from such arrogance. It is almost as if the media are afraid that a bunch of rustics may take over the country and they are treating the farm leaders as country bumpkins.

There is, however, one redeeming aspect. Younger journalists, many with their feet on the ground, are raising valid questions. A reporter like Anumeha Yadav pointed out that the very diversity of farming requires a gradient of policy in which marginal groups are catered to differently from the big farmers. Agriculture is a way of life invoking a range of life chances. Such a sensitive reading contrasts with the government’s blanket decision to bring corporates into agriculture. It is as if land as an emotion, a way of life, is suddenly read as real estate. The entry of corporate control into agriculture may eliminate the riches of diversity that make agriculture so life-giving and anarchic. In fact, Amitabh Kant’s alleged reaction as a technocrat in Niti Ayog sums up the tiredness with democracy that technocrats feel. Agriculture multiplies the tiredness and makes the regime impatient for blanket solutions.

The farmers’ strike and its narrative have become a collective parable about livelihood and governance today. At the level of a moral fable, agriculture is still a part of the unconscious, the cultural substrate of modern India. Agriculture has credibility as a moral economy that the media lack. The media, or a section of it, found it difficult to discredit the farmer even from the narrow logic of the nation state. One also realizes policy, like politics, cannot play out as, or pretend to be, a flat land of uniformity. Its very diversity is its life. To destroy that diversity is to undermine democracy. The farmer is still annadata, a credibility that the media lack. Reading the farmers’ story of narratives contained within it, one senses that democracy and agriculture need a language of plurality, a sense of the vernacular, an idea of moral economy beyond the standard political economy to survive and innovate. The stereotyped performances of Modi and Shah show that the majoritarianism of the regime has failed democracy and agriculture as moral and political imagination.

Yet an essay cannot stop at this point, not in the post-truth era. One has to realize that agriculture is beyond prices. To sustain agriculture, one has to ensure that biotechnology and the corporations do not destroy it. To ensure that, one needs not radicalism but alternative imagination. The story of the farmers’ strike has to eventually lead to alternative possibilities. Diversity becomes part of the justice of the future. Farming is not just productivity but a way of dreaming, thinking and sustaining the dreams of food. One wonders whether our media are ready for such a world. There is the bigger danger that the State might create a theatre of violence, which can erase all the issues of governance and democracy confronting it. The breakdown of agriculture might signal the breakdown of the current regime.