Advertisement
Home / Opinion / After the fire

THE THIN EDGE | Through a dystopian looking glass 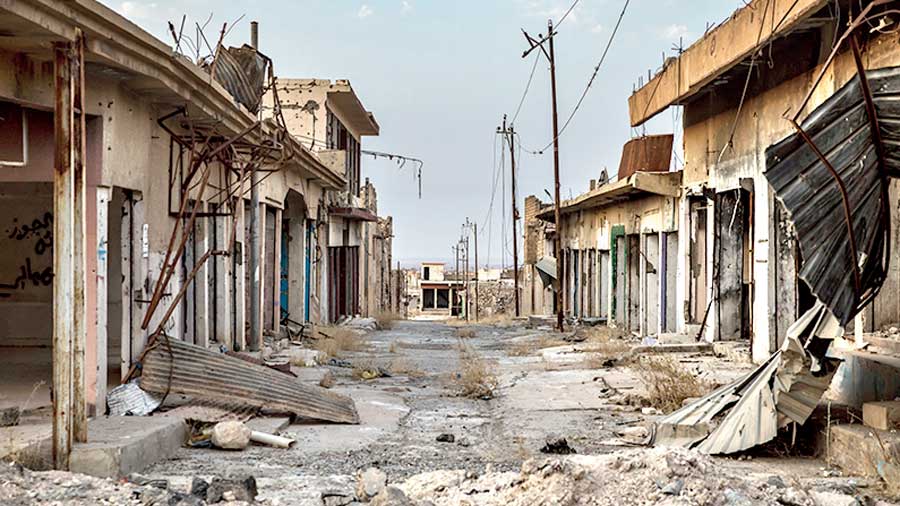 Parts of the city of Sinjar in northern Iraq were still not rebuilt in 2019, years after the U.S.-backed fighting by Iraqi and Kurdish forces to oust ISIS.
Getty Images
Ruchir Joshi   |   Published 13.07.21, 12:22 AM

On one chunk of a wall still standing in what used to be the ministry of information and broadcasting, someone has made a large portrait of the old Jesuit priest who was killed by the Orange Regime. It’s quite a large portrait, drawn with something like chalk, and the white lines stand out quite sharply against the reddish stone even in the pall of smoke and dust. It’s on the tip of my tongue but I can’t actually remember the old man’s name; it is something with S. The way they got him was to arrest him under one of those crazy ‘anti-terror’ laws they had, one of those acronym laws set up by the bunch who were in power earlier which was then refined to its logical extreme by the Orangists. The law meant they could pick up the old guy who, they alleged, was connected to some completely trumped up conspiracy which had its imaginary locus in another part of the country, arrest him despite his failing health, and put him away in jail, resisting all attempts for bail. The others they had picked up for this supposed conspiracy were kept in jail for years, but the priest they could only torment for a few months because his health couldn’t survive the treatment in jail. The guy had Parkinson’s, could barely even write his name, but they called him a ‘flight risk’ and the courts actually went along with this rigmarole. Then they fought tooth and nail — the cops, the jailers and the government lawyers — to deny the old man a cup and a sipper straw. That sipper eventually cost them: it became a graphic symbol of the casual cruelty the Regime was capable of and you can see stencils of it all over the country along with various protest graffiti. In fact, there was a big one sprayed on a decapitated statue of one of the Regime’s historic heroes on one of the nearby roundabouts. There are other pictures too, on other walls — of people murdered more directly by the Regime’s mobs, of girls raped by the Regime’s legislators, and lists scrawled in red paint or black of all the underhand deals, the slaughtered ecologies, the destroyed futures.

I walk away from the portrait of the priest and carry on exploring the shell of the gutted building. One has to be careful walking around here, because the piles of rubble are deceptive; there are huge underground parking lots below all the blocks and, sometimes, the shards of steel and masonry give way and send people right down into the lower depths of this hell. Just the other day, two scavengers were apparently buried alive in the railway ministry block. Obviously no emergency services are operational right now, but someone raised the alarm and people helped to pull them out; one of them was dead but they managed to save the other man. For me, the dead man was yet another victim of the Orange Regime, no matter that the deadly rule has been over for some time.

This is what people often don’t understand. As things became worse under the Orange Regime, and people began to pray to be released from its disastrous yoke, they imagined that things would immediately become all right once these rulers went. Life just doesn’t work like that. I remember when whatshername was assassinated, her son had justified the revenge pogroms by saying ‘[when] a great tree falls, the surrounding ground is bound to shake.’ Well, when a large cesspit hidden under a thin layer of ground collapses, it will suck in many victims before its action comes to a halt. At the zenith of the Orangistas’ power, many people knew the Regime would leave behind the wreckage of multiple interconnected disasters; they knew the longer the Regime lasted, the greater would be the devastation it left as a parting gift to the people of this country.

And here we now are, wandering around the hollowed-out former capital, sending reports and images, trying to tot up what’s completely gone and what one is able to salvage. The carnage and destruction across the land are, of course, far greater, far more widespread, than what laid low this city, but standing here amidst the smouldering ruins of the megalomaniacal dream you can ‘see’ things in a way you perhaps can’t from elsewhere. For instance, it’s a miracle of sorts that the old imperial buildings have survived almost unscathed; the big governor’s palace, the two flanking blocks, and down the ‘royal’ stretch of road the arch and even the untenanted chhatri are all as they were before the more recent building spree began in the middle of the plague ten years ago. The old royal palaces are also intact somehow, partly because of sheer luck. By the time push came to shove, about half the new ministries were already abandoned because of the prevailing circumstances despite some bureaucrats being ordered to ‘hold their positions’ by the demented orders of a rapidly disintegrating political command. As the whole world knew, the city itself had been almost abandoned by the population following the conditions created by ecological and social meltdowns.

The Orange Regime had jumped ship, of course, before the environmental disasters and political devastations fully hit home, but not before it ensured these calamities became inevitable. But here in the gutted shells of their monumental hubris you can see the whole trajectory of their rule mapped on the shards of walls and pillars.