Advertisement
Home / Opinion / After 100 days of the shutdown in Kashmir, not much has changed

After 100 days of the shutdown in Kashmir, not much has changed

Given the weight of decades of suffering, perhaps this time the wall of injustice will crumble, and not the people 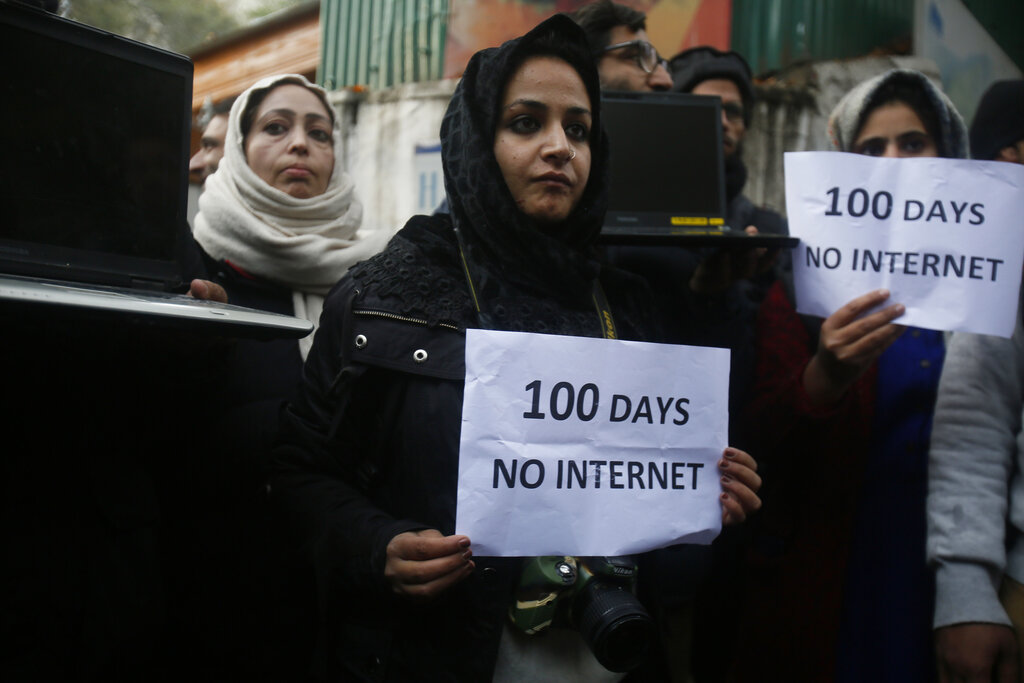 Kashmiri journalists hold placards and protest against 100 days of internet blockade in the region in Srinagar, on Tuesday, November 12, 2019. Internet services have been cut since August 5 when Indian scrapped Jammu and Kashmir's semi-autonomous status under Article 370 of the Constitution
AP Photo
Majid Maqbool   |   Published 14.11.19, 07:51 PM

August 4. Something sinister seems to be brewing in New Delhi. The air has been rife with fearful speculation for days, and social media updates reflect widespread anxiety. “Whatever is coming, let's be united. We shall overcome,” one Facebook user commented on the night of August 4, just before the internet was shut down in Kashmir.

There are more rumours of things to come than there are official confirmations of what exactly is going to happen. The only information from the government side is in the form of official orders deliberately leaked online, fuelling more fear and spreading more rumours. Government officials are either themselves clueless, or tight-lipped about what is in store for Jammu and Kashmir.

In the days before August 5, the administration asks Amarnath pilgrims to immediately leave the valley, and facilitates the departure of students from outside the state. Residents of Kashmir are told nothing, as if they don't matter. On August 3, the then governor Satya Pal Malik says, “I don't know about tomorrow, that's not in my hands. But till today, there's nothing to worry.” People stock up on essentials and fuel, and wait anxiously for what is coming next.

August 5. The worst fears of people come true. The BJP government's move to abrogate Article 370 on the floor of the Parliament is not entirely a surprise, as it was the party's stated position and also in its manifestos over the decades.

The rumours prove right. What was feared is done within a day. The state's 'special status' is removed, and it is downgraded into two Union territories. Constitutional deceit is projected, and sold, as a 'new dawn' for Jammu and Kashmir. Mainstream leaders who for decades have represented the idea of India in Kashmir are all locked up, including three former chief ministers of the state. More troops have already been brought in. The siege tightens.

All communication lines are snapped. People are disconnected from each other. No phones, no internet, and not even landlines work. The besieged people, suddenly rendered incommunicado, reach out to each other in person. Silent solidarity builds amid the gloom. The dispossessed people have nothing except holding on to – and protecting – each other. And not losing hope.

A Kashmiri woman pushes a child on a stroller past a closed market in Srinagar on Tuesday, September 24, 2019.
AP Photo

After restrictions are partially removed, the shops do not reopen as the government expected. People send out a clear, unanimous message: it's not business as usual. It can't be. A civil shutdown begins. It is voluntary, and not guided by any leaders, who are all detained. People refuse to resume normal life as the State would have liked them to. Normalcy does not return to the valley, despite claims by officials on social media.

Across the valley, every single day since August, shops have been opening for a few hours in the morning and then shutting down for the rest of the day. The government releases full front-page ads, full of grammatical mistakes, in all the prominent newspapers in the valley, asking people to 'THINK!!!' about the costs of shutdown, but they make little impact. The civil shutdown continues to this day.

“Pate kya gov, khudai chuna sore wechan, soe kare raham,” (God is seeing it all from above. He will have mercy on us) an old man tells me in a south Kashmir village in September. He is trying to sound optimistic in the pall of gloom. Pro-resistance graffiti on the walls in his village has been painted over with 'Naya Kashmir' and pro-Narendra Modi messages in the weeks after August 5. There is widespread fear among people. The local residents speak of night raids, arrests, torture and regular beatings by the armed forces stationed in the villages in southern Kashmir. It's all meant to instil more fear, they say, in order to prevent protests.

Although the state is now officially downgraded into a Union territory, with increased control from New Delhi, the relationship of the people with the State remains the same in Kashmir: the exercise of power over the powerless. For a people already battered, besieged, and stripped of basic human rights, the government and what it does next is irrelevant now. It can't get worse. The people know they are always at the receiving end of ruling dispensations, irrespective of the regime. They are always prepared for the worst. And they know how to survive in the worst of times, overcoming the worst regimes. History bears witness.

Pushing an entire people up against the wall – in addition to their continued demonization and dehumanization by State-friendly news channels in Delhi – has its own consequences. It has costs for both sides. And it's more likely that this time, given the weight of decades of people's suffering and pain, it will be the wall of injustice that will crumble, and not the people.

Reyan: Burn my books or send me to school. Dad opens window: Do you still want to go?