Attendance is indeed improving in government offices, banks and courts 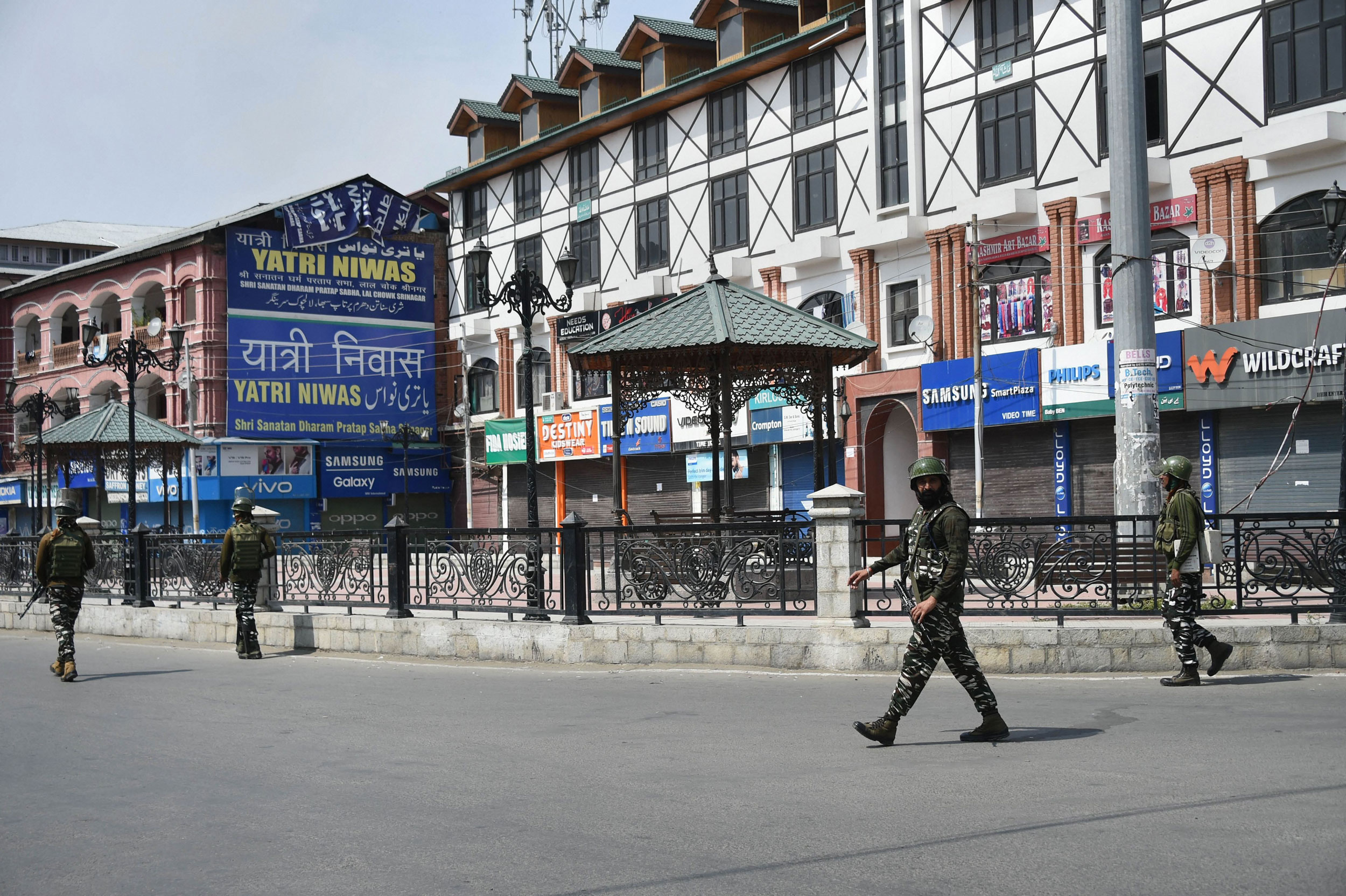 Security personnel patrol a street during restrictions and shutdown at Lal Chowk in Srinagar on September 20, 2019. Kashmir has seen umpteen shutdowns and Internet blockades over the past 30 years but never one that has stretched so long.
(PTI)
Muzaffar Raina   |   Srinagar   |   Published 23.09.19, 09:11 PM

Mir Nasrullah learnt about his sister’s death four days later. Shopkeeper Basher Gagroo saw the store next to his go up in flames but the firefighters could not be contacted in time.

The information blockade and shutdown completed 50 days on Monday. Family after Valley family poured out its tale of pain, giving the lie to the “all is well” narrative.

Kashmir has seen umpteen shutdowns and Internet blockades over the past 30 years but never one that has stretched so long and has been accompanied by a blanket ban on mobiles, landlines and BSNL broadband — unthinkable in this information age.

The Telegraph spoke to more than a dozen families that have suffered immensely from the blockade. Their accounts flew in the face of governor Satya Pal Malik’s claim that ordinary citizens have little use for mobiles and the Internet and that these services are essentially weapons of “terrorists”.

Nasrullah, who lives in Gilkadal, took four days to learn about the death of his sister, who lived 60km away in Baramulla.

“Not just us — none of her relatives living in Srinagar could attend her funeral and see her face one last time,” a relative said.

Dozens of other families faced the same situation. When Maimuna Bukhari of Gulshan Nowgam died one evening last month, her family travelled house to house the entire night to inform relatives. Many still could not make it to the funeral.

When the shop next to Gagroo’s caught fire in Srinagar’s Kadi Kadal locality, “I personally went out on my motorcycle to get the firefighters”, he said.

“But by the time they arrived, my neighbour’s shop was in ashes. Luckily, my shop was unscathed.”

A government official, one among a few whose mobile connectivity was restored, said he helped connect 15 families to their relatives working abroad.

“They were able to speak to their families after more than a month. Among them was a man working in Oman, speaking to his bed-ridden father, a cancer patient in Srinagar’s Ilahai Bagh locality, after a month,” he said.

“I witnessed emotional scenes all around. All the families were in tears as they spoke to their loved ones.”

The authorities have restored landline connectivity but few people avail themselves of the facility. Government spokesperson Rohit Kansal recently said that provocations from across the Line of Control were a major hurdle to the restoration of mobile services in the Valley.

Hundreds of people have been heading to Ladakh or Jammu to make calls.

Now, after 50 days, the situation appears a little relaxed compared with the initial weeks when curfew-like restrictions were imposed to prevent protests. But any return to normality seems far off.

What makes the shutdown unprecedented is that no group has called for it, with most senior leaders from separatist and civil rights groups and even traders’ bodies taken into custody. In recent days, though, militants and stone-throwers have been trying to enforce a complete shutdown.

Another never-before feature of the security clampdown is that the entire pro-India leadership has been thrown in jail or put under house arrest.

Adding salt to their wounds on Sunday, Jitendra Singh, minister of state in the Prime Minister’s Office, scoffed that they were living as “house guests”, enjoying “Hollywood movies and bread of their choice”.

Public transport remains shut although private transport can be seen plying on many roads, particularly in Srinagar’s civil lines areas.

Most shops and businesses remain closed but some shopkeepers have devised a novel way of adhering to the protest programme while continuing to earn a livelihood: they open their shops for a few hours in the morning or evening.

Parents are still unwilling to send their children to school weeks after the government threw the schools open. Amid government claims that attendance by pupils and staff is improving, the schools continue to be empty.

Attendance, however, is indeed improving in government offices, banks and courts.