Advertisement
Home / Opinion / Where have the voices gone?

Where have the voices gone?

Afghan women deserve the support of the ‘MeToo’ activists 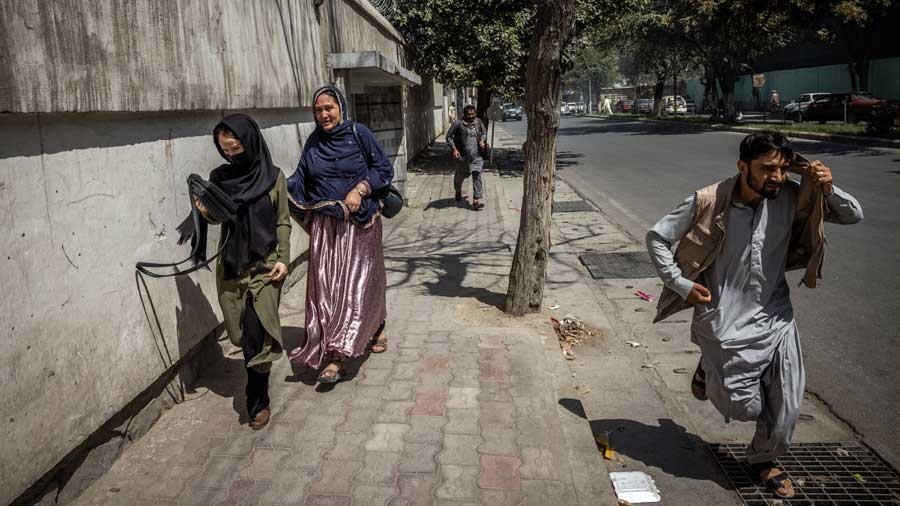 Women and men flee the scene of a protest after Taliban forces broke it up in Kabul, Afghanistan, on Tuesday, Sept. 7, 2021. The Taliban’s response to the latest demonstration by women in Kabul was another sign that they will not tolerate peaceful dissent in Afghanistan.
Jim Huylebroek/The New York Times
Chirantan Chatterjee   |   Published 13.09.21, 01:40 AM

It has been a few months since the United States of America decided to unconditionally pull out its troops from Afghanistan. We now know that a humanitarian catastrophe is unfolding there. We also know that women and children were particularly vulnerable as thousands flocked to the Kabul airport to meet the August 31 deadline set by the US for the evacuation of troops. Various reports have stated that the Taliban are going to let women participate in Afghanistan’s workforce and society subject to the conditions of the sharia. This possibility has been met with derision and scepticism.

Surprisingly, global women’s rights activists have been quiet during this period, particularly those part of the ‘MeToo’ movement. Coined so by the women’s rights activist, Tarana Burke, in 2006, the movement gathered momentum in 2017 with the Harvey Weinstein episode. As of today, the hashtag has trended in at least 85 countries and celebrities — Alyssa Milano, Gwyneth Paltrow, Ashley Judd and Uma Thurman, among others —have lent their voice to the movement. Yet, a cursory search of these names and their stated positions on women in Afghanistan reveal a strange silence. Have they been shocked by the recent turn of events? Might they be working in the background trying to influence G7 countries for supportive measures for Afghan women? Is UN Women, one of the key voices in this space, doing enough herein? These are questions that must be raised globally, especially in a world where women leaders like Angela Merkel or Jacinda Ardern are few and far between, at least in terms of influence on geopolitical decision-making.

Moreover, all of this is happening in the backdrop of the Covid-19 pandemic in which, many publicized estimates have shown, women have suffered disproportionately on account of the ripple effects of lockdown measures on the economy, labour markets and households. Strangely, influential women — Mackenzie Scott, Melinda Gates or Indra Nooyi — are not speaking enough on the crises.

The MeToo movement has its antecedents in the West where institutions, to some extent, complement the role of individual influencers. But in poorer economies in large parts of Asia, Africa, Latin America and other conflict zones, these institutions are mostly absent, and the fight remains between individual women and their oppressors. Even Malala Yousafzai was criticized for being late in commenting on the Taliban’s advent in Afghanistan. But without the supporting institutions, speaking out may not change the status quo in these regions.

Meanwhile, the men from the West continue to waffle through the Afghan mayhem. The British chief of defence, General Nick Carter, has claimed that this time around, the Taliban want an inclusive society but was caught off guard when his interviewer intervened, ‘except women’. In his televised addresses, President Joe Biden may have mentioned the precarious plight of women in Afghanistan but that is almost always a side note.

Afghan women deserve the support of the ‘MeToo’ activists. The absence of support could expose the movement’s prejudices. If women’s rights decline in Afghanistan after two decades of gain in literacy and other positive outcomes for women (as indicated by data from UN Women), there could be a negative spill-over effect in other neighbouring societies reeling under Covid-19 and the yoke of fundamentalism. The return of the Taliban and the weakening of women’s rights could have larger ramifications. Research suggests that there is an inverse link between women’s empowerment and domestic terrorism. Cameron Harris and Daniel Milton, in their article in 2015 in the Journal of Human Rights, found evidence in support of this hypothesis on the basis of a sample of 150 countries between 1970 and 2004 — that women’s empowerment leads to a decline in domestic terrorism, an idea that found support among Laura Bush and Hillary Clinton.

Where have those voices now gone amidst the calamity in Afghanistan? Isn’t it time to reinvigorate them not just to support Afghan women but to cleanse local and global terrorism?

Chirantan Chatterjee is a Tenured Reader in Economics of Innovation at the University of Sussex, United Kingdom