Academic freedom and learning are being systematically eroded 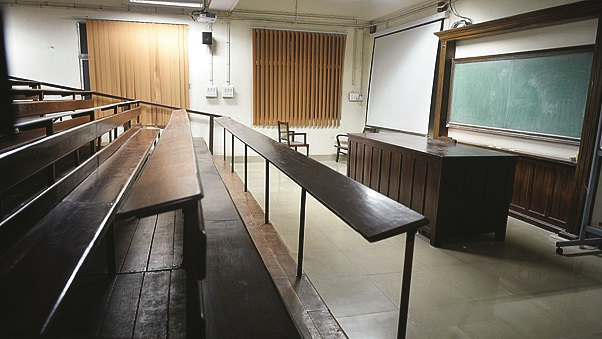 The freedom of thought and the associated freedom of expressing one’s ideas together form a fundamental bulwark of democracy, arguably as important as the freedom to live. The freedom of thought is best enshrined in academia. Institutes of higher learning like universities and colleges are, in every society, the nurseries where such intellectual freedoms flourish. Up to the level of secondary education, young people are taught the value of thinking by and for themselves, while being exposed to ideas that are well known and well established. Hence, academic freedom can be thought of as constituting an essential feature of democracy. This is not to argue that anything can be accepted as representing freedom of thought and expression. For instance, if someone or some group propagates that the Holocaust did not happen, it represents a patent falsehood. There are enough facts and figures that give compelling and unambiguous evidence of it happening, with its inhuman consequences. This propagation of proven lies does not represent freedom. On the other hand, some individual or a group might argue that genocide is good and even justified in certain cases. Here it is obvious that the freedom of expressing this is in direct conflict with the freedom to live. Hence, the expression of supporting genocide is never acceptable.

The reason for bringing this up is because there are forces today that are weakening the freedom to think and express original ideas; ideas that could be socially debated. Potentially these debates and their outcomes could make the world a better place to live in. The world of ideas and opinions in academics is under threat. One talks of institutions at the macro level being stripped of their social role to provide justice and to nurture new ideas: political institutions, the judiciary, the bureaucracy, and institutions of higher learning to name just a few. One complains about their erosion. When it comes to concrete instances, however, one feels scared to talk about a particular politician, a specific judgment, a corrupt civil servant or an authoritarian leader of an academic institute. Yet, the rot does start from the micro level of particular organizations and institutions.

What has been happening, mostly unnoticed and hidden from the public gaze, is the systematic erosion of learning and freedom of expression in institutions of higher learning. There is a concerted effort to meddle in academia: the syllabi, content, who teaches, what is allowed to be discussed, who regulates and, above all, who must be obeyed beyond any question. What is being demanded is absolute loyalty to one particular way of thinking and believing. Debates and discussions are not encouraged and, in certain cases, simply not permitted. Creating anxiety is the key instrument used in achieving this. One can lose one’s job, be humiliated, punished, and even be identified as a crook with dishonest dealings, or a tax evader, or an anti-national terrorist. Even one’s citizenship can be questioned. Either one dissents and is punished, or one conforms and receives rewards. It is hard to be neutral. The dominant way of thinking implies that if one is not in support of the official position, then one is against the nation. Those who remain quiet implicitly signal their conformity.

How does a ‘good’ academic institution get eroded and ultimately ruined? The crux of the matter lies in exercising total control. People close to the political party in power are put in charge of an institution. The person in charge then changes processes, conventions and rules, such that all decisions become as centralized as possible. Once this is done, the exertion of control is easier because desired results can be achieved without explicit violation of due process. This control is most commonly manifested in the denial of institutional resources in many kinds of ways. Promotions become more difficult and everybody in the faculty is given the impression that they are not quite up to the required intellectual mark. Criticism is not used as an enabler for improvement but as a humiliating and demeaning threat.

The non-academic staff members are easier to control. They can be transferred across departments, or they can be asked to ‘voluntarily resign’. Unions are broken up. Anyway, the non-academic staff members do not contribute directly to the freedom of expression, but enable the physical and procedural conditions within which such freedoms can be exercised. This enabling environment is gradually vitiated. Students, on the other hand, comprise stakeholders who are articulate and have the capacity to express themselves in terms of new ideas and thoughts. They have energy and a basic sense of fairness that can trigger protests and dissent whenever they see injustice, even if it does not affect them directly. Students are natural allies for protesting against institutional as well as larger social ills. Students are, therefore, a potential threat to the system of total control and absolute loyalty. They can be threatened with physical violence if the need arises, and the overall system of criminal justice is brought to play its part: the police, trumped-up charges, short incarcerations without being produced in courts of law, and of course the pursuance of false and lengthy cases.

The social sciences and humanities as disciplines pursued in institutions of higher learning constitute a natural space where new ideas and social critiques are likely to emerge. These disciplines are carefully monitored — what is actually taught, and who teaches the subjects. In an institution, in the selection committee constituted for hiring a professor of ancient Indian history, the expert picked was a professor of life sciences and known to be close to the ruling political party. In another instance the head of the institution asked a member of the faculty directly whether he was now suitably afraid of authority. It would be difficult for such situations to arise in organizations where there is more participation by faculty members and students in decision making. Checks and balances are more likely to be better designed.

In the sciences, control has to be more subtle. Modern science thrives on questioning existing theories as well as raising doubts. The nuanced attack lies in the political promotion of myths and superstitions where falsehoods, repeated many times over, become part of an altered belief system of ordinary people who then begin to suspect science and scientists. The availability of the internet in the times of the Kurukshetra, gold in gau mata’s milk, plastic surgery performed on Lord Ganesha’s head and the miraculous power of cows’ excreta are recent instances of demeaning science at the highest political levels. Here again, ultimate control is important even if a few scientists continue to do their own intellectual work. The lies and alternative narratives begin to be believed because someone propagated them as uncontested truths. The question marks that remained on issues such as whether an election was really stolen or whether sophisticated plastic surgery was practised in ancient India gradually become replaced by full stops.

Power inevitably engenders the need for control. The control of thoughts and feelings is likely to get more sophisticated and easier with the development of emerging technologies. Ideological intolerance is germane to political establishments. Every political party has been guilty of this to some extent in the past. What is happening now is much more systematic and subtle.