Advertisement
Home / Opinion / A republic of anger has no future

A republic of anger has no future

To be patriotic today, you don’t need to love your country; all you need to do is to be angry with its putative enemies 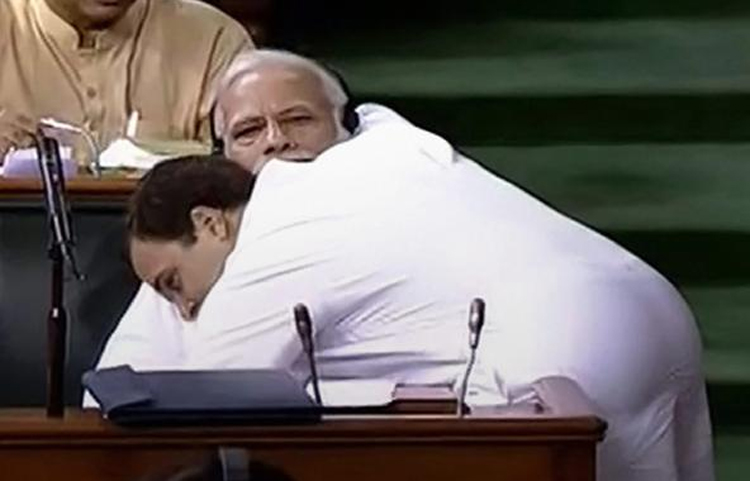 Congress President Rahul Gandhi hugs Prime Minister Modi after his speech during the debate on the no-confidence motion against the government in the Lok Sabha in July 2018.
(PTI file picture)
Swami Agnivesh And Valson Thampu   |   Published 15.05.19, 03:16 AM

A man, a stepfather, goes out in the morning for a walk with his ‘wife’. When they return, he notices that the younger of his two stepsons — a child of four — has wet his bed. He flies into a rage. He had ordered the older boy to ensure that the child did not wet his bed. What does the angry stepfather do? He sends the older child flying with a kick. He keeps attacking the victim, multiplying his injuries. A few days later, despite heroic medical efforts, the boy dies in hospital.

Good heavens, no! We are becoming a republic of anger. Anger is already exalted as a national virtue: the sole expression of patriotism. To be patriotic today, you don’t need to love your country; all you need to do is to be angry with its putative enemies, both within and without.

Catch a Dalit — or better still a Muslim — carting an animal or a carcass to earn a livelihood, the only trade he knows. Ask no questions. Give him no time to say a word.

Set upon him. Beat him to pulp. If he groans for a drop of water, as he bleeds to death,

laugh over it. Let your anger have the sharpest edge.

Now move into the heart of civilization. Listen to public speeches. To parliamentary debates. What do you hear? Mostly the rumblings of the juggernaut of anger, no? These are election times, right?

Yet a moment of calm reflection will convince us that there is nothing more destructive, more self-denigrating, than anger. All other passions, Seneca wrote, assail human reason. Anger assails human sanity.

The essence of patriotism is love for the motherland. But what is motherland without the people who are her children? The idea of the ‘motherland’ implies that every human being living therein is indispensable. But this logic is beyond the reach of the patriotism of anger. You are a patriot. You don’t like this other person who, in your opinion, is different from you and, therefore, cannot be a patriot. Bump him off; failing which at least be angry with him. Flaunt your patriotism. Get yourself garlanded by a cabinet minister.

The psychology of anger operates, according to the Stoic school of thought, on a set of assumptions. First, you conclude that you have been wronged and that you didn’t deserve it. Second, you assume that you have a right to retaliate. Third, you assume that it shows high spirits to retaliate and retaliate with vehemence. A tooth for a tooth under normal circumstances; but a jaw for a tooth, circumstances being more propitious. Fourth, you surrender yourself to your anger. Your anger now reigns supreme. You are a mere instrument of the anger to which you have surrendered your whole being.

Who kicked and killed the seven-year-old boy? His stepfather? Or, as the Ancients would say, the Furies that possessed him?

Of course, it is misleading to palm off responsibilities to spectres and furies. There is a kind of common sense at work. Assume that the uncle of the boy-victim is a police officer, and he happens to be nearby. Surely, the enraged stepfather would have had far greater control over his rage.

Consider the following example. It is not only Pakistan that niggles us on or near the borders. China, too, has been active to our detriment. But no one tells us that we have a duty to catch the first Chinese national we run into and lynch him for the greater glory of India. With respect to China we advocate dignified restraint as proof of cultural and spiritual maturity.

So it is not as if we can’t control our anger. We think it is safe to give in to it because the climate of opinion that prevails is to our advantage. This is universally true, and nobody is inferior or superior in this respect, unless we spiritually discipline ourselves to be different. Get a handle on your anger. Don’t abandon yourself to the eruption of the irrational within you.

Anger denotes a failure in love. Rahul Gandhi hugging Narendra Modi in Parliament was for me a splendid spiritual moment in the history of our democracy. At the moment it happened, I thought it was just an impulsive gesture. But his subsequent statements leave us in no doubt that it was a natural expression of Rahul’s refusal to return hate for hate.

That is a rare flash of the humane in the domain of the political. Given the way our country has been dragged over terrains of hate, anger and intolerance in recent years, nothing is more desperately needed than this timely dose of an antidote to anger.

A republic of anger has no future; for anger is frightfully wasteful of energy and disruptive in purpose. We have to be willfully blind to history and perversely irrational in outlook if we are to believe that anger can contribute to national vitality or power the nation towards happier days ahead.