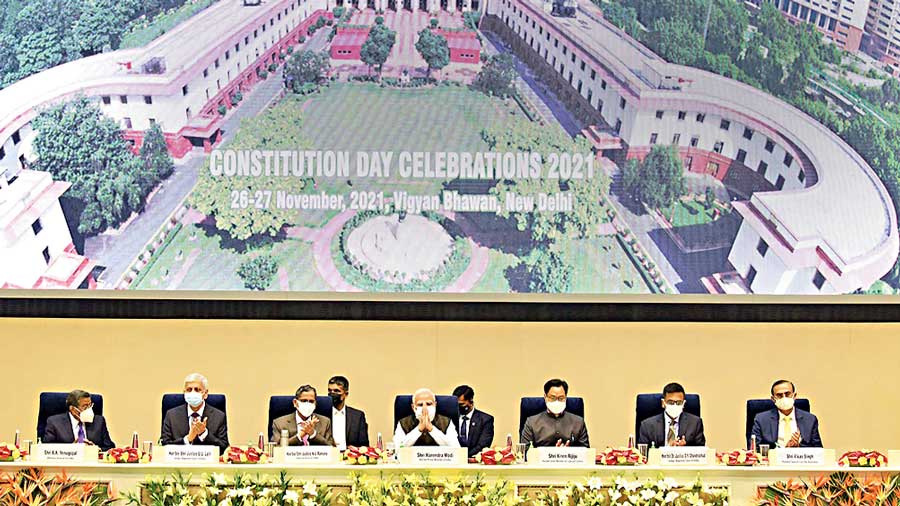 ‘Constitution Day’ was celebrated in an interesting manner this time. The Bharatiya Janata Party government took the opportunity to interrogate the political credibility of Opposition parties. Prime Minister Narendra Modi strongly argued that Opposition parties undermined the democratic values of the Constitution. Without naming the Congress, he raised the question of parivarvad — dynasty politics — and described it as an anti-constitutional phenomenon.

Opposition parties, on the other hand, boycotted the Constitution Day event in Parliament’s Central Hall. They also evoked the Constitution to question the democratic credibility of the government. The Congress leader, Anand Sharma, argued that the “Constitution is not being respected… and parliamentary democracy is being undermined and insulted… Lawmaking has become most undemocratic, and the government has now firmed up a dangerous trend to make laws through ordinance.”

These seemingly conflicting interpretations of the Constitution, in my view, stem from a broad political consensus. The entire political class recognizes the Constitution as a source of political inspiration. It also agrees that the Constitution must be followed in letter and spirit. There is no disagreement on the contributions of national heroes — the founding fathers (except Jawaharlal Nehru!) — in producing such a great legal text.

Yet, there is a reluctance to get into any serious politics of the Constitution. The political parties are more interested in the rhetoric of the Constitution, either to refute each other or to legitimize themselves in the marketplace of electoral competition. The idea of deeper, democratic transformation of society does not attract them at all.

To understand this strange absence of constructive politics, we must have a brief overview of the postcolonial political career of the Indian Constitution.

It is worth noting that the Constitution was not an object of political worship in the initial decades after Independence. It was always seen as a legal-political mechanism to refashion Indian polity and society. In fact, there were quite a few serious attempts to critically evaluate the everydayness of Indian democracy in relation to the wider constitutional imaginations.

Jayaprakash Narayan’s famous book, A Plea for Reconstruction of the Indian Polity (1959), is an excellent example in this regard. The book makes it very clear that there is no need to write a new Constitution for India. Instead, Narayan outlines a few broad ideas to revisit the existing institutional apparatus and the problems associated with it.

This was the reason why the anti-Emergency forces, including the civil liberty groups, opposed the Indira Gandhi regime on moral-political grounds. The limitations of the constitutional provisions, particularly those related to the executive powers of the Centre, were recognized to propose profound meanings of democracy. In a way, the 44th amendment of the Constitution was the outcome of these serious considerations.

This critical political engagement with constitutional principles assumed a new, radical overtone in the realm of the grassroots politics of the 1970s and the 1980s. People’s movements for environmental protection, movements against forced displacement, Dalit assertions, and the various adivasi agitations for jal, jangal, zameen began to recognize the political value of fundamental rights. These movements derived their intellectual resources from Indian realities and local traditions and gave a new radical status to the Indian Constitution. The Narmada Bachao Andolan against the Sardar Sarovar Dam and the Chhattisgarh Mukti Morcha, a trade union movement led by tribals in the 1980s, are revealing examples of this active politics of the Constitution.

The crucial economic-political transformation that took place in the early 1990s actually paved the way for what may be called Constitution worship. The liberalization of the Indian economy and the stated decline of the welfare State led to a serious crisis of political legitimacy. There was tremendous pressure on political parties. They had to accept globalization without giving up the claim that their politics had always been jan seva — an Indian version of welfarism. They had to justify their presence as a vehicle of social change — a duty that is imposed on them by the Constitution itself.

In this context, the Indian Constitution was rediscovered by the political class as an object of celebration. The constitutional emphasis on social transformation was replaced by a new and highly vague discourse of social inclusion. The triumph of Indian democracy became a new political mantra. The regularity of free and fair elections and the enthusiastic participation of Indian voters were shown as evidence of the enduring success of the Indian Constitution.

This official appropriation of the Constitution produced a new political common sense: the claim that the Constitution is an apolitical entity; a holy book or a charter of democracy that has nothing to do with the wider politics of social transformation.

This perceived disassociation between politics and the Constitution is widely acknowledged. In the 2015 Delhi assembly election, the Congress issued a poster with the caption, “Rajniti Nahi Kajniti (No politics but work)”. Interestingly, Narendra Modi also shared this view of politics rather uncritically. In a recent rally in Uttar Pradesh, he said, “infrastructure is not part of ‘rajniti’ (politics) for us but part of rashtra niti (National Policy).” It simply means that even top leaders like Rahul Gandhi and Narendra Modi share the popular view that politics is a negative activity, especially when it comes to elections.

This negative view of politics is dangerous. It will help the political class monumentalize the Constitution as a sacred text. At the same time, it will also create the impression that political parties are the most legitimate interpreters of the Constitution.

There is a need to reclaim the active politics of peaceful social transformation as our fundamental constitutional duty precisely for these reasons.