Several events in the last couple of months, including meetings between Sharad Pawar and Prashant Kishor, have fuelled talks of a federal front of regional parties 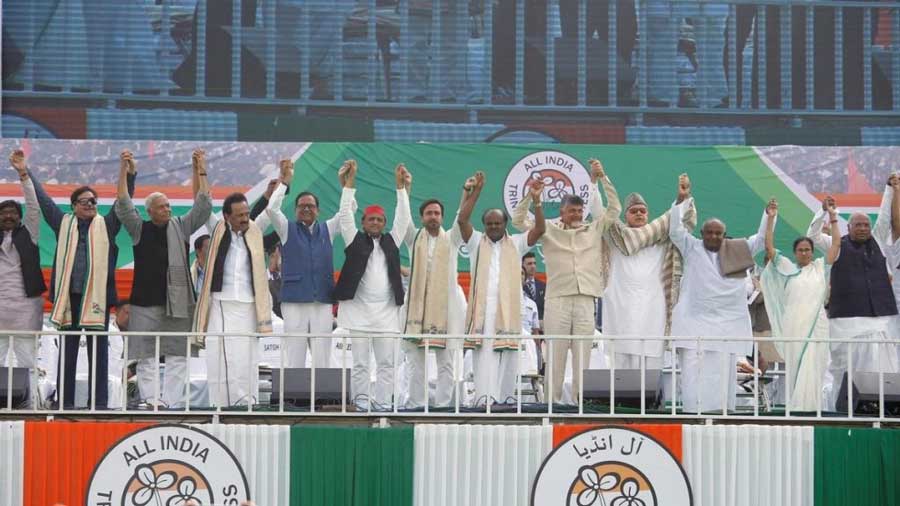 Leaders of opposition parties join their hands together during the “United India” rally ahead of the general election, in Kolkata, January 19, 2019.
File photo
Omkar Poojari   |   Published 17.08.21, 12:28 AM

The results of the assembly elections held in the first half of 2021, which reinforced the view that the balance of power in the Opposition has shifted from the Congress to the regional forces, have revitalized India’s regional political outfits. While chief ministers like Hemant Soren, Pinarayi Vijayan, M.K. Stalin, Arvind Kejriwal, Uddhav Thackeray and Mamata Banerjee are growing increasingly vocal and combative against the Union government’s unilateral approach, the idea of a federal front floated by the regional satraps to take on the Bharatiya Janata Party in 2024 has been gaining currency. Several events in the last couple of months, including a series of meetings between Sharad Pawar and Prashant Kishor and the meeting of the Rashtriya Manch at Pawar’s Delhi residence, have fuelled talks of a federal front of regional parties. Conspicuous by its absence in the meeting was the Congress. The absence of the grand old party along with the venue chosen — Pawar’s Delhi residence — heightened speculations about the Congress being left out of the proposed front.

After the heavy defeat it faced in the 2019 parliamentary polls, the Congress has been in a state of inertia showing no signs of urgency to set its house in order to take on the Narendra Modi-led BJP. To make matters worse, the faction-ridden party has suffered a series of electoral reverses since 2019 and is yet to elect a full-time working president. It has also received flak for being the weak link in alliances and dragging down its allies in assembly elections in the recent past. The Congress may be looking like an electoral liability, making non-BJP parties wary of allying with it. But is it really weak enough to be left out of a front that can seriously challenge the BJP in 2024?

Despite its far-from-impressive electoral record in recent times and the episodic, erratic and lethargic brand of leadership of its top brass, the Congress continues to be the only pan-India party after the BJP. In 2019, the Congress won 52 seats. But it still managed to garner about 12 crore votes, capturing almost 20 per cent of the total votes polled. In over 200 seats, the Congress occupied the second position. As things stand today, the nature of political competition in at least 10 states — Gujarat, Madhya Pradesh, Rajasthan, Chhattisgarh, Himachal Pradesh, Uttarakhand, Goa and a few in the Northeast — is bipolar. In 117 Lok Sabha seats in these states, the Congress and the BJP are engaged in a direct contest. In four more states — Maharashtra, Assam, Karnataka and Haryana — accounting for 100 seats, the Congress remains the principal Opposition to the BJP despite the presence of regional forces. South of the Vindhyas, the Congress has its pockets of influence even as the BJP continues to struggle to gain a toehold barring Karnataka.

Simply put, the Congress remains the best bet to take on the BJP in 250-300 odd seats. The party is undoubtedly too weak to challenge the BJP on its own but it is not weak enough to be left out of any political formation that aims to take the battle to the BJP in 2024. It must be added here that Pawar, Kishor and even leaders of other Opposition parties have been quick to dismiss the idea of a third front minus the Congress, calling it a futile and an unfeasible exercise.

But nothing happens in politics without a reason. By taking the lead in the efforts to prop up a united front of anti-BJP forces almost three years before the general elections, the regional parties are probably sending the following message to the Congress: the task of forging a front to take on the BJP cannot be delayed on account of the Congress’s inability to sort out its internal mess. Ambitious, regional satraps are also flexing their muscles to let the party know that a weakened Congress would not be allowed to assume to be the leader of the proposed front.

Only regional parties, it is being said, can break the BJP’s hegemony. Such an interpretation is erroneous. The most pragmatic approach would be to invest in a ‘horses for courses’ strategy and fully back the strongest contender to dethrone the BJP in a particular state or region. This would mean that the Congress would become an indispensable component of the anti-BJP front and, at the same time, be forced to give up seats in many states where it is not the strongest contender to fight the BJP.