A legacy of gifts

Jean-Luc Godard was a generous artist 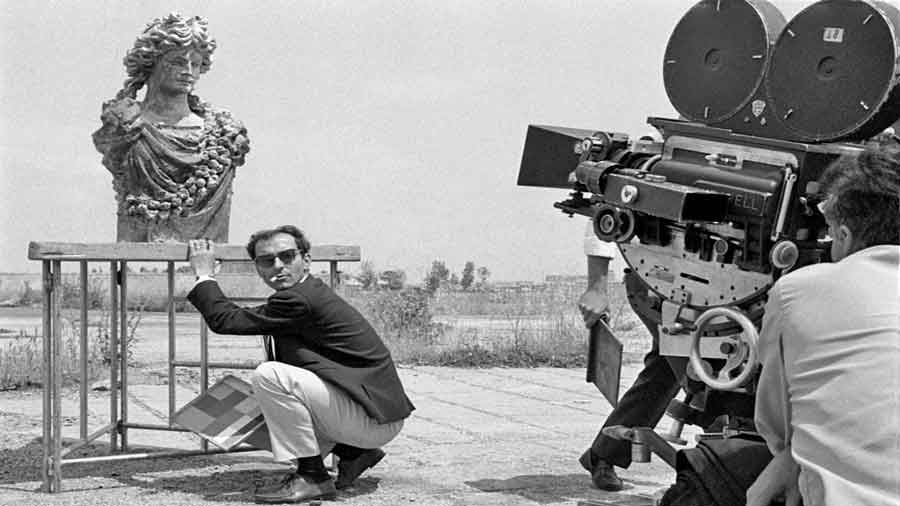 The first time I see a film by Jean-Luc Godard. 1978, the old Alliance Française in Park Mansions. Walk up the creaky wooden stairs past the Dalí posters for the French Railways, or risk your life in the ancient cage elevator that swings moodily, winching you up. On the second floor, the French language classes. On the third floor, next to the library where the French books and magazines exude a very particular musk, the screening space. Here, two 16mm projectors add their warm, pellicular waft, their beams somehow circumventing the narrow pillar that stands right in the middle of the room. The problem with Une Femme est Une Femme is that it’s shot in CinemaScope,with a much wider frame than the ‘normal’ 35mm; so the film is projected with a band of pillar shadow bifurcating the image towards the left. It doesn’t matter.

What matters is that you’re in a packed audience, finally watching one of Godard’s films, creatures you’ve only read about till now; what matters is the Gallic olfactory universe mingling with the Pond’s talcum powder worn by the object of desire sitting next to you, still in her Loreto uniform, her French so much better than yours that she can laugh at the jokes before the subtitles fully unfold. The framing stylish, of a kind you’ve not seen before; the colours and compositions Mondrianesque, so that the pillar shadow both irritates and adds to the picture. There’s also sweet confusion in the odd cutting, the strange use of songs, the flash frames, the sudden use of text — a whole eros of lensing, sound and montage. Later, in other French films, the stairway and the elevator from Park Mansions seem to have been transported to Paris or vice versa. Soon after this, other Godard films are on offer at the Alliance and at Chitrabani; a few of the 60s hits, culminating in Pierrot Le Fou at the Alliance, by which time the CinemaScope problem is solved by making the image a little smaller. By which time, firmly encouraged by Anna Karina and Jean-Paul Belmondo, the stairway with the fading Dalí posters has become a site for first, actual French kisses.

In the early Godard films, the central subject always seems to be love and desire,and how power and knowledge slam into them. In the sci-fi Alphaville from 1965, the all-controlling AI computer is imploded by its inability to process the word, ‘love’. The different taste of seeing Godard in America. If his films were a kind of food, even back home it tasted different, different from the films of the great Calcutta triumvirate, different from the other French New Wave films, different from our own new wave, from everybody. Here, the work is re-Made in USA: watching some of the same Godard films, the friends sitting next to you laugh at different places than at home. The kisses are more normal but, in the context of a growing acquaintance with Western feminism, the questions and analysis around kissing have yet another taste. Mas-cu-lain! Fe-mi-nain! A bunch of us students run down Bleecker Street, rolling these words in our mouths, shouting them out to bemused, un-Godarded passersby.

But. The more you see of Godard’s ‘revolutionary period’, (roughly 1968-72) the more the irritations mount. What’s with the blind love for Mao and his China? What’s with the Black Panther scenes in 1+1/Sympathy for the Devil where pompous, macho black men declaim from revolutionary texts while gunning down white women in virginal nighties? What’s with this fetishisation of the semi-automatic rifle and hack Marxism? An anti-homage shot from today: a man walks up to a wall and sprays red letters on it — MAO. A little while later, a passing woman sees the graffiti and stops. She pulls out a spray can from her bag and adds another letter in white. LMAO, Laughing My Ass Off, except what the Great Helmsman wreaked on his people still strangles all laughter.

Unlike back in Cal, in late 70s Amerika, no one’s listening so much to the Beatles or the Stones any more; likewise, people have moved on from JLG’s great 60s hits — they’re much more interested in his recent video experiments from the 1970s. This work is at the centre of discussions about sexuality, about how women are represented on the screen, about what sound and image together can do. Son/Image. The great punster, visual and textual, has come up with another one: in French, son means ‘sound’ but also ‘his’, so sound/image is also his/image. And then, just as you’re getting your teeth into the multi-layered, anti-feature film palimpsest of Numéro Deux, Monsieur Le Trickster is back with a ‘conventional’ drama film in Sauve qui Peut.

A title card flashes in the head: that control-freak Godard did not spare even his own death. But then you look at the interview JLG does on a US talk show in 1980 about Sauve qui Peut. In his early 50s, receding hair, behind the iconic shaded glasses the Groucho Marx eyebrows on which he shares rental with Leonid Brezhnev and Salman Rushdie. His English fluent, though oddly tinged with an accent more Italian than French. The replies to questions sparkling with immense wit and displaying a firm grasp of contemporary American culture.And then the same man, forty-odd years later, trying to engage in a Zoom dialogue with an Indian film scholar during the IFFK in 2021. The distinctive voice now shredded, barely making it out past the bramble of beard and cigar, his English rendered threadbare by age. His first question: geographically, where is Kerala? In the past, he would have looked it up beforehand on an atlas and might even have known a thing or two about the state and the people; now, his crowded mind is barely able to cope as it sifts through multiple thoughts. Seeing this, you understand why he might have wanted to splice the FIN title on to his life with his own hand.

Godard was the 20th-century artist most generous to all the rest of us practitioners. Across these last forty-odd years, the man comes and goes out of frame but you see his gifts everywhere, in all sorts of films and video-work, in every kind of audio-visual language. So too with his ways of thinking about ways of seeing: “you have to listen to the image and look at sound, use it like music or painting.” Or his life-long struggle against the passive consumption of images: “as a viewer, I need to work on what I am seeing.” Or his constant interrogation not only of the world but also of himself, which once led to the startling confession about first seeing the completed Breathless, his first full-length film: “I didn’t know what was going on when I saw it.” Like so many of us who felt the same after seeing the film, Godard continued to work for the rest of his life on what he had seen on that screen. A thought for an end title: perhaps one should sometimes see Godard with a pillar in the middle of the projector throw.