A Kerala church shows the way

By welcoming Muslims, it reinforced the idea of India that ordinary citizens believe in 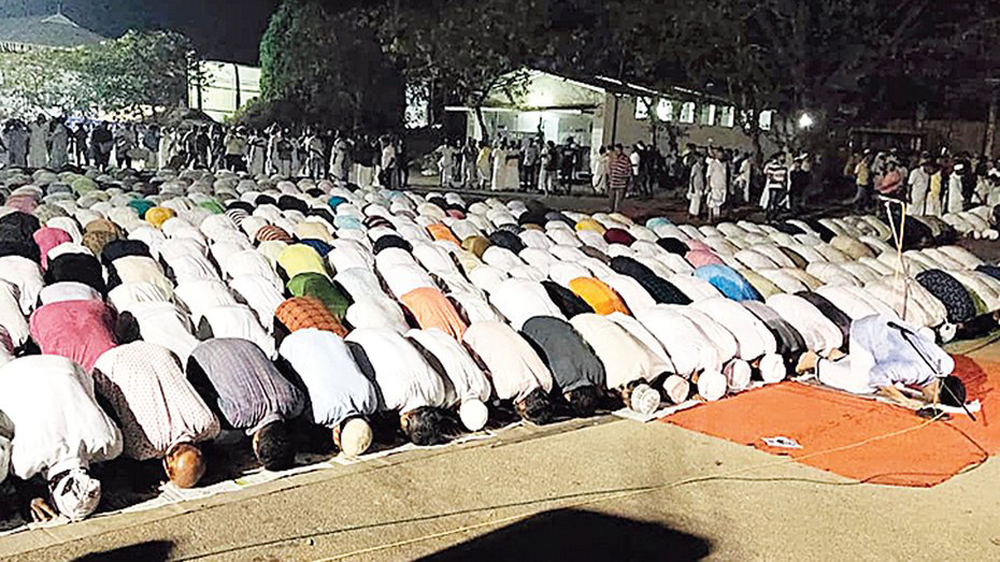 Sir — In a touching gesture of communal amity, a local church in Kothamangalam in Kerala threw its gates open to hundreds of Muslim protesters who had come marching from 10 kilometres away to voice their discontent with the Citizenship (Amendment) Act (“Church opens gates for namaz”, Dec 30). The church authorities made all necessary arrangements for them to offer namaz within the precincts of the church, and no less than the vicar himself poured the water for the ablutions that are mandatory before prayers.

This shows that the idea of India that ordinary citizens cherish is not one that abets the demolition of the shrines of other religions, but one that upholds communal harmony and the spirit of fraternity. Such an idea is in keeping with the teachings of Indian spiritual leaders such as the Buddha, Nanak, Kabir and Vivekananda. All secular, humanitarian citizens of the country must help preserve these values that define the essence of India, and reject the Centre’s toxic rhetoric of ‘New India’, which stands for nothing but hatred among communities and the politics of muscle power.

Sir — The passage of the CAA in Parliament has unleashed chaos across the country. At such a time of communal tension, the Kerala church, Marthoma Cheriapally, has made an exceptional gesture of acceptance by making arrangements for Muslim protesters to offer namaz within its premises. This instils hope among the people and reinstates their faith in their capacity to protect the foundational values of the nation. As such, it is no wonder that India has emerged as a democracy that has withstood the test of time. This incident also assures the people that if any government tries to obliterate the diversity ingrained in India’s cultural fabric, the countrymen will stand up to it. Religious leaders like the vicar of the Kerala church, Jose Parathuvayalil, deserve our respect for sending out a powerful message of love and harmony across the nation.

Sir — A new year is expected to usher in positive changes in the lives of people across the world. But for that to happen, people themselves must bring about a change in their actions. Ever since New Year’s Eve, the night sky in Indian cities has been filled with smoke owing to the firecrackers burst by people to celebrate the occasion. Do they not understand that this only worsens the quality of air they breathe the next morning? Surely all the crackers burst on the night of December 31 were not ‘green’? It is time citizens take responsibility for their actions and make room for real change.

Sir — A report has revealed that out of 153 economies under study, India ranks among the bottom five countries in terms of the gender gap, with women’s health and economic participation being dismal (“Yawning gap”, Dec 23). Although the situation is unfortunate, the results are hardly surprising. Social prejudice, deeply-embedded misogyny and the apathy of the country’s policymakers towards the well-being of women are responsible for this problem.

India has a skewed sex-ratio on account of sex-selective abortion and female infanticide. But even when a girl child is allowed to live, she is often deprived of proper education. This makes her incapable of securing a well-paying job later in life. As such, without the financial means to sustain herself, she is vulnerable to domestic violence. No initiative on female empowerment will be successful unless women are self-sufficient. The government must pay attention to these issues.

Trip back in time

Sir — Growing up in Calcutta, it was common to take the tram to avoid crowded buses. Now, however, people complain that trams are too slow and cause traffic jams (“Timeline tram”, Dec 29). And yet, it is difficult not to appreciate this vehicle, meandering through the city like a caterpillar. The people of Calcutta should be proud that theirs is the only city in India where this mode of transport is still functional. The tram system just needs to be modernized. Fully air-conditioned tramcars have already been launched, but they are few in number. The old tramcars should be discarded and only modern coaches should be allowed to run. That is when passengers will start using trams again.

Sir — The article on Calutta’s trams in The Telegraph took readers on a nostalgic trip. But it has become difficult to board a tram these days. Owing to the lack of proper tram stations, one has to risk life and limb to board a tramcar in the middle of the road. The tracks should also be oriented properly.

The tram used to be a signature of the city. The service deserves modernization along the lines of European models. It could be an effective mode of transport as tramcars can carry many passengers and reduce pollution. It is time the government takes steps to resuscitate the system.