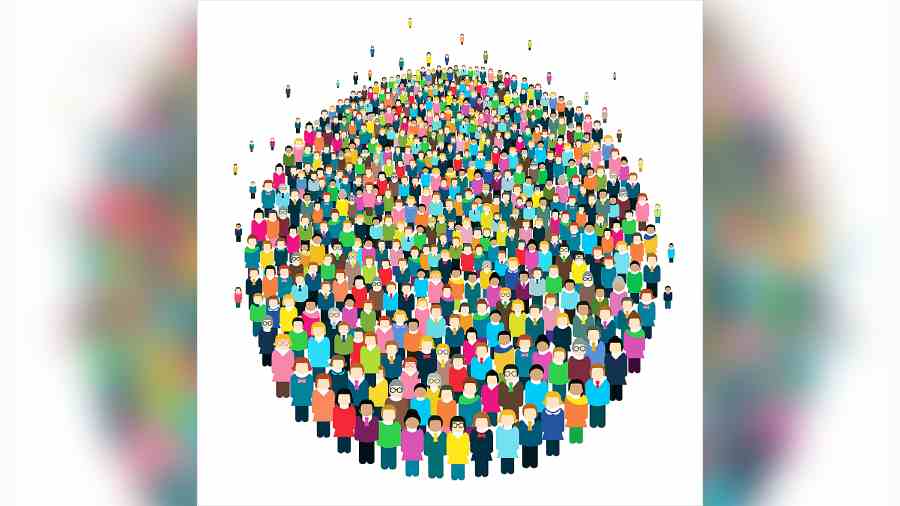 The rising incomes of people and the associated ease of living have brought down death rates and increased birth rates of our species
Anup Sinha   |   Published 14.12.22, 03:35 AM

The global population of the human species has recently touched the eight-billion mark. Two hundred years ago, it was about one billion. Even a hundred years ago, it was only about two billion. The projection for 2050 is a little over nine billion. It is evident that the number of human beings has increased dramatically over the last two hundred years. The rising incomes of people and the associated ease of living have brought down death rates and increased birth rates of our species. The industrial revolution has made larger families affordable. The technological marvels of the industrial age have also resulted in our ability to extract and consume more of the planet’s resources. Hence, not only are we many more in numbers but each of us also consumes much more than we did in the past. The multiplicative effect of these two pressures has raised questions about whether this system of growth can be sustained over time without the planet running out of critical resources and triggering an environmental disaster — even if the global population stabilises around 10 or 11 billion.

Population issues are debated around three important questions. Why does population keep on increasing? Can the planet sustain eight billion of us? What does the near future have in store for us?

The first question is complex enough. It was initially thought that as incomes grew and standards of living improved, people could afford to have more children. Hence, modern economic growth was positively correlated to population dynamics. More recent research evidence shows that poor families also plan to have more children as an old-age security strategy, where the next generation is expected to look after the aged in the absence of social security networks. It was also found that poor people planned for more children than they thought was optimal because not all would survive to adulthood. More hands in the family meant more income-earners. On the other hand, the richer a society grew, families were found to plan for a lower number of children so as to be able to invest more in the upbringing of each child. What we do find now is that population growth rates are highest in some of the poorest countries. On the other hand, in many of the rich nations, natural population growth rates (ignoring migration from other places) have declined to replacement rates. This has resulted in the average age of the population rising. The demographic age distribution is quite skewed and migration pressures from low income to high income countries have resulted in sociological stresses caused by differences in race and culture.

The second question, as to whether the world can sustain eight billion of us, is complicated too. Ecologists have evidence and estimates that suggest humanity has begun to consume nature’s services at a rate higher than what can be renewed. The analogy is about the interest that ecosystems give us from ecological capital. If we consume more than the interest, we are eating into ecological capital. This can be potentially disastrous in the near future. There are estimates by economists suggesting that the carrying capacity of the planet is about five billion humans at the most, without irreversibly running down natural capital. Other estimates of the carrying capacity of the planet for humans average around eight billion. There could still be some relief on the pressures exerted on nature if human lifestyles and consumption patterns change substantially, and quickly. This is a political problem. One cannot compel an individual (or a family) to consume less or produce less of off-springs. Both of these are considered private decisions that individual liberties protect. Yet, the larger aggregate of society’s population is a negative externality on the economy. The upshot of this question is that if we collectively continue to live and consume the way we do currently, humanity would need to have more than one planet to survive. That is still an impossibility in the short run, at least till we can colonise the moon or Mars as some have speculated.

The third question centres around the future implications of a burgeoning human population. This is tricky, and many speculations abound. One such is the rather dystopian belief that pandemics, climate change and social conflicts will result in a great loss of lives, leading to a Malthusian correction for too many people competing for too few resources. A related possibility allows governments to become more authoritarian so as to force changes in lifestyles and consumption patterns. If this is considered a sustainable solution, it will only be at the cost of individual liberties. Yet another possibility discussed, arising from a deep faith in human intelligence to create technological solutions, is that over time we will need fewer and fewer resources to survive. We could get all our physical energy needs by popping a pill every day, like Soma in Aldous Huxley’s Brave New World. Finally, of course, there is the moon or Mars to go to.

A more likely situation emerging in the near future would be more of the same set of stresses rather than any catastrophic crisis. We might have more geo-political tensions, migration-related violence, climate refugees, shortage of food and other resources, pandemics and new diseases. Authoritarian governments would proliferate and debate will become more acute over what needs to be done without much actually being done, like in the case of carbon emissions. Individual consciousness ab out the planetary pressures will increase. Some efforts will be made to stay on the moon or on mars. It will be a pathway to a slow death. The marvellous creativity of the human mind may come to nothing after all.

A different ethical issue is more bothersome. Whenever we talk of population size, and what might its implications be, there is a sub-text that the world (or our own nation) is overpopulated. Indeed, crossing the limits of carrying capacity means exactly that. The thought that crosses my mind is how to identify those who are redundant? How do I know that I do not belong to that set?