A growing solution to global warming

Many countries are investing heavily in renewable energy, but none is giving attention to growing more wood for biofuel 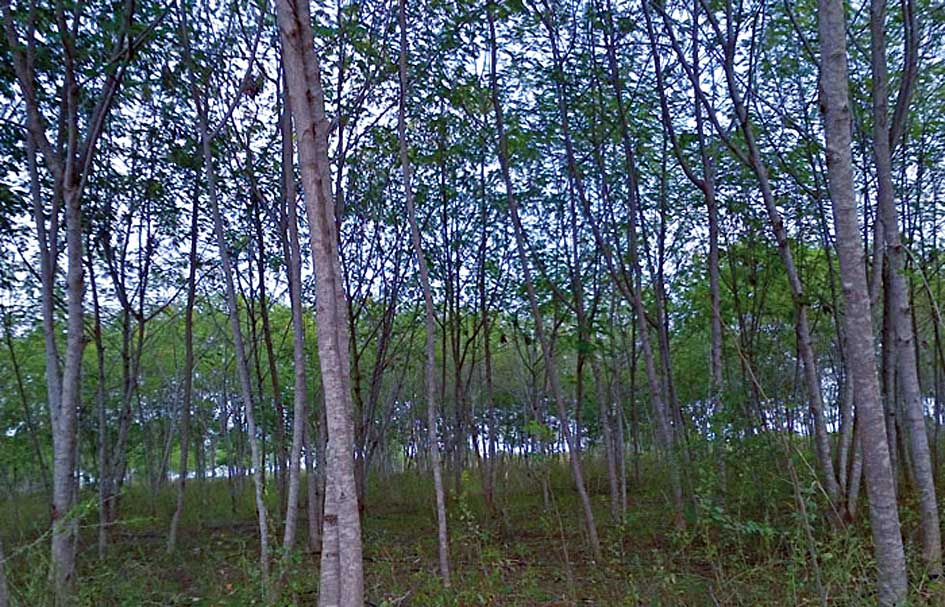 If Indian officials were not so busy attending international conferences, they would go and look at the Melia dubia plantation of near Bangalore
(Picture: Energy Plantation Projects India's official website)
Ashok V. Desai   |     |   Published 16.04.19, 03:15 AM

Carbon dioxide in the world atmosphere has inexorably mounted with the consumption of coal, oil and gas. Global temperatures have also risen; their rise is related to the accumulating carbon dioxide in the atmosphere. Some powerful rulers dismiss the scientific evidence of global warming; other rulers assert the right of their countries to go on burning carbonic fuels because they think they did not burn enough in the past. But many countries have taken the risk of global warming seriously and responded by reducing carbonic fuel consumption and changing over to renewable energy. What is the net effect of these developments? Is the world heading towards disaster, or is its regress slowing down? Official energy organizations bring out voluminous reports every year, but they tend to avoid frank answers that might displease one or the other government. But the report of the Athens-based Renewable Energy Policy Network for the 21st Century is relatively more illuminative.

Of the energy consumption in 2015, 48 per cent was in the form of heat; 27 per cent of it came from renewable energy – 16 per cent from traditional biomass, and the remaining 11 per cent from modern renewables. A fifth was in the form of electricity: three quarters of it was old-style thermal power, and a quarter was renewable. The odd man out was transport, which consumed almost a third of total energy: only a tenth of it was renewable, and a tenth of that tenth was renewable electricity, the rest being biofuels.

Renewable electricity has attracted much attention and investment, but there is a problem with it. The power that can be obtained from a renewable energy source varies: solar power is available only on sunny days, wind power only when wind blows, and so on. Hence capacity utilization of renewable energy resources is lower than for fossil fuels. Renewable power capacity in 2017 was about 40 per cent of total capacity; but renewable power output was 26.5 per cent: in other words, average capacity utilization of renewable sources was only about 60 per cent of that of conventional power. The figure would vary from source to source and place to place; but renewable electricity requires heavy investment and gives variable and unreliable supply. Hence reliable power supply requires that a high proportion of power capacity that can be switched on and off — typically, fossil-fuel-based.

Of the 2,195 gigawatts of renewable power capacity in 2017, 1,114 GW was of conventional hydroelectricity. Of the 1,095 GW of modern renewable capacity, just over 500 GW was of wind power, about 400 GW of solar power, and just over 100 GW of biopower. China has built up 334 GW; EU, 320 GW. The US has created a capacity of 161 GW; Germany comes next with 106 GW, whilst India is third with 61 GW. Japan comes close with 57 GW, mostly solar. The countries that have invested most heavily in renewables have mostly invested in wind power; solar power comes second, whilst the rest are unimportant. The share of renewables in power generation exceeds a half in Denmark, which has covered itself with windmills turned by North Sea winds; it is between 20 and 30 per cent in Uruguay, Germany, Ireland, Portugal and Spain.

Policies to compel mixture of biofuel in transport fuels, such as we have in India, have become quite common; India and China have them, as do most American countries, north and south. But the required mixture is modest in most countries. The common policy for solar power used to be a feed-in tariff embodying a subsidy; but as its costs have come down, more countries are now opting for tenders to minimize costs. Since renewable energy generation does not coincide with energy demand, it must either supply a very small share of energy, or it needs to be stored; many countries are now mandating storage.

Electric vehicles are essential to the reduction of fossil fuel consumption; most European and Asian countries have incorporated them in their renewable energy policies. Many cities in North America and China are also mandating vehicle electrification.

Geothermal energy is geographically constrained. The US, with its subterranean gas deposits, is its biggest producer, with a capacity of 2.5 GW in 2017. Philippines and Indonesia had almost 2 GW each; Turkey and New Zealand had 1 GW each. Elsewhere, it is underexplored; many governments are wary of its environmental impact. But economic compulsions may force them eventually to explore it.

China has gone about systematically damming its huge rivers descending from the Tibetan plateau; today it produces 28 per cent of world hydroelectricity. Brazil produces 9 per cent, whilst the US and Canada produce 7 per cent each. India and Russia follow with 4 per cent each.

The greatest activity in any renewable is in solar photovoltaics; of the total capacity of 402 GW in 2017, China had built up 131 GW, followed by the US (51 GW), Japan (48 GW), Germany, (42 GW), Italy (20 GW) and India (18 GW). It is notable that the countries with the most sunshine do not lead in developing solar PV. Biopower generation reached 555 terrawatt-hours; China led, followed by the US, Brazil, Germany, Japan, the UK and India.

Biofuels are the best substitute for fossil fuels; but for them to gain market share, biomass has to be grown. So many countries are investing so much in renewable energy, but none is giving attention to growing more wood. If Indian officials were not so busy attending international conferences, they would go and look at the Melia dubia plantation of Energy Plantation Projects (picture) just outside Bangalore. Growing more biomass to replace fossil fuels is the solution to global warming; India should show the way.

On climate change, children are the adults in the room

Action on climate change: Too little, too late