A crucial test of civilization lies in how power is handled 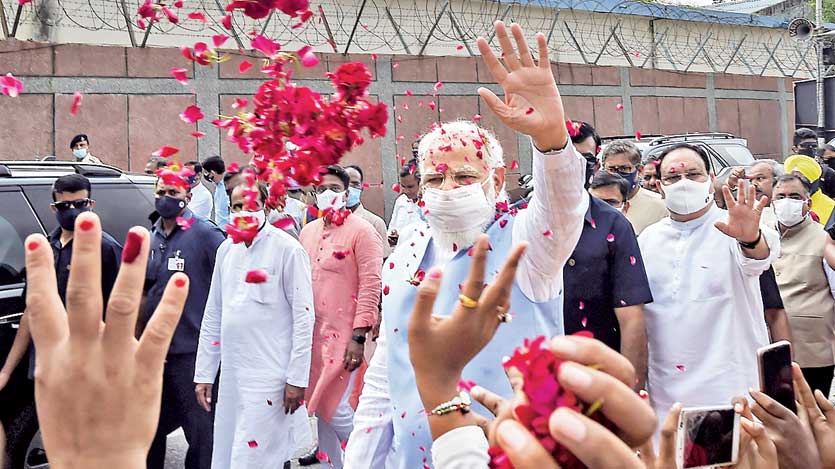 It seems sacrilegious to say today of all days that much of the cant and corruption that shroud India can be laid at Mohandas Karamchand Gandhi’s door. Not that Gandhi Jayanti is left with much of the remembered atmosphere of overpowering sanctity. Richard Symonds, the young English Quaker whom the Mahatma befriended in Delhi, might have denied any inconsistency even in some club bars remaining open today: he remembered that Gandhi regarded porter, a heavy dark beer brewed from malt, as medicinal because his landlady in London had forced him to drink it when he was unwell and it tasted so horrible.

Nevertheless, the day is of consequence because Gandhi’s widely-publicized reverence for Daridranarayan set an unattainable ideal of probity, which widened the gulf between practice and precept. One result was that India’s 2019 election was reckoned the costliest in the world. Another is pious posturing. If Jawaharlal Nehru reportedly claimed to live on fifty rupees a month, Narendra Modi got away with “Hum to fakir aadmi hai, jhola leke chal padenge.” Such legacies make it impossible to speculate on the likely consequences of Gandhi’s (or Christ’s) return to earth. Conjecture is simpler when the subject is someone more easily grasped like Nehru whose “internal elegance — an absence of all coarseness” struck the Australian diplomat, Walter Crocker, so forcefully. “It was not for nothing”, Crocker wrote, “that one of his [Nehru’s] severest animadversions was ‘vulgar’.”

Since propaganda is by definition vulgar, it’s difficult to think of what is not vulgar about a regime that steals credit by changing the names of existing schemes, emblazons certificates and other communications with its leader’s mugshot and slogans, and is now thought to bask in a global role, thanks to Joe Biden and the Quadrilateral Security Dialogue although Australia’s Scott Morrison won the Sheriff’s role. Tastelessness and mismanagement are not confined to one party. If Mamata Banerjee is “shocked and stunned” at aspects of New Delhi’s conduct, Bengalis are also shocked and stunned at so many people, including two young girls, being electrocuted because of poor maintenance resulting from political rapacity and administrative negligence. One is humbled by the pluck of the bereaved mother who responded to the state government’s compensation of Rs 2 lakhs by offering to give double that amount to have her 13-year-old daughter back.

While the pandemic has heightened what Arun Maira calls the “clash between the needs of humanity and the principles of capitalism”, a certain coarseness had begun to disfigure society’s higher echelons much earlier. Perhaps it was always there but undetected. Not many Indians noticed or understood the sensitivity that prompted Lord Pethick-Lawrence, the saintly socialist secretary of state for India, to refuse to enter G.D. Birla’s house when visiting India in 1946 as part of the British Cabinet Mission; he waited in his car under the jamun trees outside for Gandhi’s emissary, Sudhir Ghosh.

Money is being made and squandered in the midst of destitution, underscoring the relevance of Edward Heath’s comment about “the unpleasant and unacceptable face of capitalism”. Apart from the extravagance of Air India One, which flew Modi non-stop to the Washington summit and the lavish investments abroad by India’s tycoons, a small indication of the overwhelming vulgarization of society is the dazzle of jewellers’ shops extending in a chain of gold and glitter even in unpretentious middle-class areas like Calcutta’s Rashbehari Avenue.

The 13-month (at the time of writing) farmers’ agitation more specifically confirms crony capitalism, disdain for outsiders, and administrative incompetence. Nothing could contrast more sharply with the pride, concern, vision and firmness with which Lee Kuan Yew responded in 1980 to the work-to-rule agitation by Singapore Airlines pilots. When their recalcitrance disrupted a London-Dubai flight, Lee summoned the striking pilots to his office and ordered them, out of sight of TV cameras, “Get back to work, restore discipline, then argue your case.” They capitulated in 65 minutes because they knew that the airline would otherwise be grounded. “Whoever governs Singapore must have that iron in him,” Lee explained. “Or give it up. This is not a game of cards. This is your life and mine. I spent a whole lifetime building this. And as long as I’m in charge, nobody’s going to knock it down.”

An Indian politician would have considered only the strikers’ castes, the vote banks they represented, the amount of money received in donations, bonds or whatever from them as well as from the airline, and the danger of rival parties wooing the disgruntled pilots. Social disruption, economic stability, public convenience, a State-owned institution’s reputation, and the loss of millions of dollars in sales and advertising would have been of no concern. The political mentality has not changed since it was fashionable to chant “Sarkar ka maal, pani me dal!”

A crucial test of civilization lies in how power is handled. There could be no more revealing contrast in that respect than between last Sunday’s jejune elation over the prime minister’s American visit and Indira Gandhi’s rejection of Lee’s pleadings to move into Southeast Asia when Britain withdrew 50 years ago. Shrewd and realistic, Mrs Gandhi knew — as Lee acknowledged many years later — that an India that was beset with domestic problems and hostile neighbours did not have the capacity to invest in the security of what European geographers once called Further India but which is now a buoyant region of nation-states with vigorous economic and political agendas.

As China’s ambassador to India, Sun Weidong, must know despite his formal protest against the trilateral Aukus, Modi does not face the responsibility Mrs Gandhi rejected. If the treaty charges anyone with underwriting regional security, it’s Morrison who will get eight nuclear submarines (to start with) for the task. Some 20 years ago, another Australian prime minister, John Howard, invited George W. Bush’s rebuke by calling himself America’s “deputy sheriff”. “There’s nothing deputy about this relationship,” Bush clarified; Australia was an “equal partner” and Howard a full-fledged sheriff. Yet, New Delhi’s opinion-makers gloat over what they call the prime minister’s bid for global leadership and imagine he will pick up Security Council membership on the way.

Even Biden’s reference to “a shared responsibility to uphold democratic values” must be read with the Economist Intelligence Unit’s finding that the global ranking of India’s “flawed democracy” has “slipped from 27th (in 2014) to 53rd” because of “democratic backsliding by the authorities and crackdowns on civil liberties...”. His mention of a “joint commitment to diversity” (also stressed by the vice-president, Kamala Harris) may have reminded Modi of the EIU’s charge that he had “introduced a religious element to the conceptualisation of Indian citizenship, a step that many critics see as undermining the secular basis of the Indian state”. As for Biden’s reference to “four million Indian Americans who make the United States stronger every single day”, America’s gain is India’s loss: those four million are there only because India cannot provide for its children. It’s not spoken of only because, as the president also said, India’s journalists are “much better behaved” (meaning mealy-mouthed) than their American counterparts.

People might applaud humongous statuary, outsize turbans, boasts about intimacy with the world’s movers and shakers, reinvention of the capital city, ostentatious consumerism and steady movement towards a majoritarian ethic. But, as Gandhi warned, “Those who claim to lead the masses must resolutely refuse to be led by them, if we want to avoid mob law and desire ordered progress for the country.” It’s also worth recalling this Gandhi Jayanti that someone who refused to be called a saint who had strayed into politics, much preferring the description of “a politician who is trying to become a saint”, understood the perils of populism.