Liberals and the anti-Modi Right 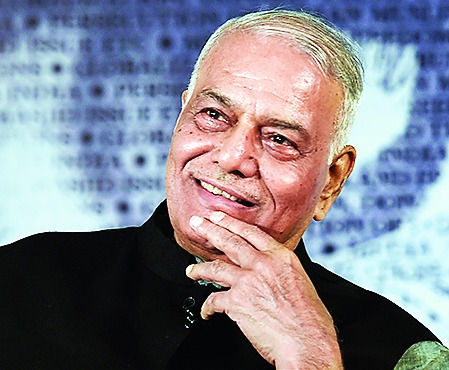 Yashwant Sinha, once finance minister in Vajpayee's NDA, is the latest majoritarian critic of Arun Jaitley and Narendra Modi. He follows in the footsteps of Subramanian Swamy and Arun Shourie who have made trenchant, well-publicized criticisms of the National Democratic Alliance government's economic policies. All three men seem to have impressed India's beleaguered Opposition parties and the government's liberal critics because their screeds were given considerable play in newspapers and news channels. Subramanian Swamy, for example, was interviewed by Vir Sanghvi on prime time and his dire predictions about the economy were amplified by social media as liberals tried to spread the bad word.

Since his first eruption two years ago, Arun Shourie does his Etna imitation every now and then and his pithy characterization of Narendra Modi's government as 'Congress plus cow' has become a beloved motto amongst progressives. His principal criticism of Modi has been economic: according to Shourie, Modi's government was more concerned with managing the media than managing the economy. Similarly, Yashwant Sinha chose to attack Arun Jaitley and by implication his political master, Modi, for mishandling the economy. After Sinha's withering op-ed, Modi and he traded allusive barbs, weaponizing the Mahabharata to attack each other. At a book release function organized by the Congress politician, Manish Tewari, Sinha suggested that Narendra Modi and Amit Shah were contemporary India's answer to the two Kaurava brothers remembered for their infamy, Duryodhana and Dushasana. Newspapers reported that this witticism had the mainly Congress audience in splits.

After the Modi-Shah juggernaut's demolition job in assembly elections, it's understandable that political opponents and liberal/secular/left-wing critics might be susceptible to the idea that my enemy's enemy is my friend. After the UP election, especially, you can see how any bad press for this government might be read as good news by its critics. But these critics should be careful both of the company they keep and, more importantly, the assumption that it was the motto of economic reform that helped elect Narendra Modi's government and it will be its failure to live up to that promise that will sink it.

At any other moment Swamy, Sinha and Shourie would be, by any liberal reckoning, dangerous and divisive figures. Swamy's views on the Ram Mandir, on Muslims, on India as a Hindu rashtra ought to consign him to the fringes of democratic politics; that he is a member of the Rajya Sabha, installed there by Modi's government, is a sign of how far right the political centre of gravity has shifted in three years. For those who have forgotten, this is Swamy's credo: "If any Muslim acknowledges his or her Hindu legacy, then we Hindus can accept him or her as a part of the Brihad Hindu Samaj (greater Hindu society) which is Hindustan. India that is Bharat that is Hindustan is a nation of Hindus and others whose ancestors were Hindus. Others, who refuse to acknowledge this, or those foreigners who become Indian citizens by registration, can remain in India but should not have voting rights (which means they cannot be elected representatives)."

And yet this political extremist and professional maverick was interviewed on prime time by a distinguished liberal talk show host who framed Swamy's pique at being left out of the cabinet as devastating critique. Nothing he said in between spasms of self-congratulation was original but it was an important interview because it illustrated how marginal liberals have become to mainstream politics. Boiler plate criticism of Modi became significant only if his critics were embedded in the common sense of the sangh parivar.

Arun Shourie is, perhaps, the Hindu right's only claim to ideological intelligence. In the course of a lifetime of polemic, Shourie has written book-length screeds against everything that Hindutvavadis hate: communists, Ambedkar, Christian missionaries, secular historians and Islam. He admires the Rashtriya Swayamsevak Sangh, he was eloquent in his support for the movement for a Ram temple at Ayodhya and he was famously unmoved by the Gujarat pogrom. "I must say that I was not all the time for this, that Modi has to go because of the killings, because in my view such things happen as a reaction, as happened in Delhi as a reaction to [Indira] Gandhi's brutal killing [in 1984]. You can't then prevent those things. Nobody can prevent those things."

This 'action-reaction' alibi was straight out of the BJP's playbook, not, you would imagine, the views of a poster boy for India's anti-majoritarian liberals. You'd be wrong. Arun Shourie became the toast of liberal society for bad mouthing Modi and the RSS and for criticizing love jihad and gau rakshaks. Apart from Ajaz Ashraf's fine account of Shourie's unexplained about-faces since 2015, Shourie's blithe reversal on Modi went unchallenged. His buyer's remorse was economic: he hadn't examined the Gujarat Model closely enough to see through the sham. He deplored the intimidation of Muslims via the sangh's campaigns against interfaith love ('love jihad') and the trade in cows ('gau raksha') without ever explaining why he had supported a party and a candidate for whom these issues were political bread and butter, their stock in trade.

The latest veteran to audition for the BJP's Bhishma Pitamah role is Yashwant Sinha. This is understandable: 'senior' politicians want to be elder statesmen, not pensioners and Modi has been ruthless about retiring them. What isn't understandable is the willingness of the regime's liberal critics to overlook everything they would usually detest about these disgruntled men merely because they are willing to testify to the decline of the economy. This willed blindness grows out of the notion that if a ' hava' can be built up around Modi's economic ineptitude, the 2019 election might stop being a foregone conclusion and come into play. The reasoning seems to be that it was Modi's plank of material progress and well-being that won him the last election and it is the collapse of that plank that will lose him the next one. It is, in some ways, a re-run of that famous Clintonism: 'It's the economy, stupid.'

Only it isn't. Modi won because his reputation for economic efficiency was derived from his principal reputation as a Hindu strongman with a short way with recalcitrant minorities, who did what needed to be done. To repurpose Ta-Nehisi Coates aphorism on Trump's victory, not everyone who voted for the Bharatiya Janata Party in 2014 was a bigot but they were willing to vote in an anti-Muslim party committed to a Hindu rashtra. Narendra Modi's real achievement in 2014 was to find a pitch that allowed voters, intellectuals and businessmen a respectable way of owning their comfort with majoritarianism: Modi's reputation as an economic reformer made their ride to the dark side kosher. When liberals and progressives hail friendly fire from BJP's malcontents, they make this journey in reverse. They seem to imagine that economic disillusionment is the sure route to a Modi-mukt India. The truth is that in a political milieu where liberals are reduced to applauding committed majoritarians for venting, the alternatives to the present dispensation will likely come from a place to the right of Modi and Shah.

Yashwant Sinha isn't looking to be a liberal mascot. He knows whose side he is on. About six months ago in April, he tried to lead a Ram Navami procession through a village near Hazaribagh in Jharkhand, along with the local BJP MLA. Religious processions had been banned in this village since a communal riot in 1984. In 2016, there had been communal clashes in Hazaribagh town and its surrounding areas when the Ram Navami procession insisted on marching past Muslim neighbourhoods. Despite this, Sinha was willing to ignore prohibitory orders to engage in a fracas with the police to burnish, at the age of 80, his Hindu credentials.

Liberals should worry when it becomes reasonable for them to cheer Hindutvavadis on in their internecine squabbles. They should worry when it seems prudent to focus on Modi's economic missteps because liberal arguments against majoritarian bigotry seem electorally unwise. Once the main argument against the Modi government is reduced to potshots about the economy fired off the shoulders of veteran majoritarians, liberals are trapped in a conversation curated by the Hindu right. A conversation where it's safe to savage demonetization but electorally unproductive to call out the brutal communalism of the sangh parivar, where it's profitable to speak up for Hindus but quixotic to speak for Hind.