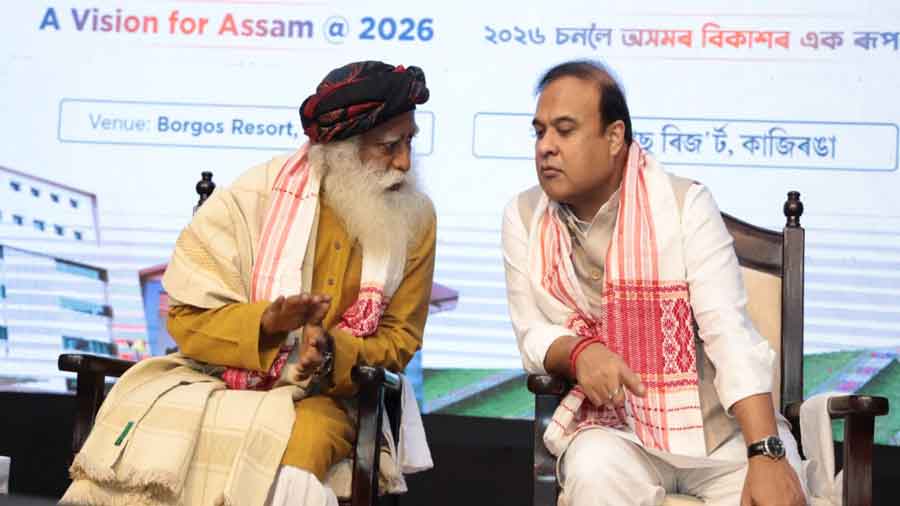 The Assam government launched a first-of-its-kind chintan shivir at the Kaziranga National Park from Saturday afternoon to prepare a road map for the state’s holistic development by 2026.

Led by Assam chief minister Himanta Biswa Sarma all ministers and senior bureaucrats heading their departments are among those participating in the three-day brainstorming sessions, inaugurated by spiritual guru Sadhguru Jaggi Vasudev.

In his address, Sarma said this was the first time ministers and officials heading government departments had all got together with the objective of preparing a road map for Assam’s development.

Sarma told the ministers and bureaucrats that the state needed a vision that came with accountability and responsibility. The chief minister said he strongly believed the Centre “never neglected Assam” if one went through the budgetary allocations for the state.

“It is we who have collectively failed. To camouflage our failure we put the blame on Centre... We need to identify the bottlenecks and remove them,” Sarma said, recalling how Assam was a contributing state before Independence with its high GDP and per capita income but lost its way after India achieved freedom.

Sarma hoped Sadhguru’s wisdom would help them set the “right tone” for the chintan shivir and “deliver” the desired benefits in charting out the road map for the state’s holistic development by 2026.

Both Sarma and Sadhguru went for a jeep safari in the evening. Since taking over as the chief minister in May 2021, Sarma has shared his dream of turning Assam into one of the five developed states of India. The decision to hold the chintan shivir was taken by the state cabinet in August.

Sadhguru pitched for Assam creating an environment where everybody wanted to come and live; where there is good administration and opportunities. He also pitched for private-sector participation with adequate policy control. Cabinet minister Pijush Hazarika said the brainstorming session would discuss ways to take Assam “economically” forward by 2026.

“We will have to look at other states — what they are doing right and what we are doing, among others. That is why this chintan shivir,” Hazarika said.