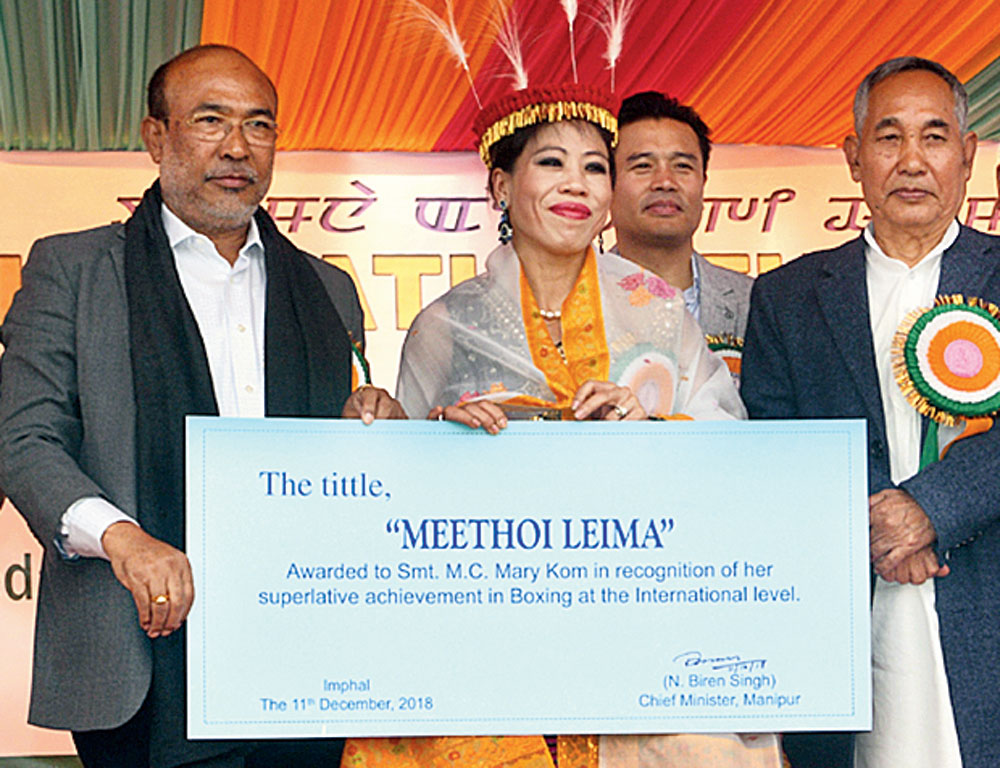 World champion pugilist M.C. Mary Kom was on Tuesday bestowed with the title of Meethoi Leima (Ultimate Lady) by the Manipur government at a function at Khuman Lampak sports complex here.

Chief minister N. Biren Singh handed over a crown and traditional attire to Mary Kom along with a cheque for Rs 10 lakh amid cheers from the gathering.

Mary Kom said she was greatly moved by the kind gesture. “It is with the government’s support and people’s blessings that I am able to win the boxing titles. Lots of people, including my colleagues in Parliament, seemed to have reservations whether I can win my sixth world title but my patience paid off. If you have the patience, determination and will power, you can do it. Patience is my mantra,” she said.

The 35-year-old boxer said she does not miss a single training session and called upon young sportspersons to do the same.

“I intend to compete in the 2020 Tokyo Olympics. It is the dream of each and every player to represent the country in the Olympics. I will do my best in the next two years and seek everyone’s blessing and support in my endeavour,” she said.

Biren Singh said, “Winning the sixth world title is not an easy job. She is the only woman to have achieved this feat. That is why we decided to confer the title of Meethoi Leima, which she richly deserves. She has made Manipur and India proud with her achievements. I would also congratulate her coaches and family members who stood by her through thick and thin. She is a proud daughter of Manipur.”

He also said the DC Road leading to Langol in Imphal West will be named after Mary Kom and the state cabinet will have a meeting soon to make an announcement in this regard.

He appealed to sportspersons to maintain discipline and regular practice so that their dreams of making it big fructify in the future.

Biren Singh also said the government will lay the foundation stone for installing floodlights at the Khuman Lampak main stadium at Rs 20.28 crore and a hockey stadium on December 17.

On the same day, the foundation stone of a football turf at Langjing in Imphal West will be also laid. The project will cost around Rs 10.14 crore.