Rhino toll in Kaziranga rises to 12

141 animals had died while 64 animals were rescued 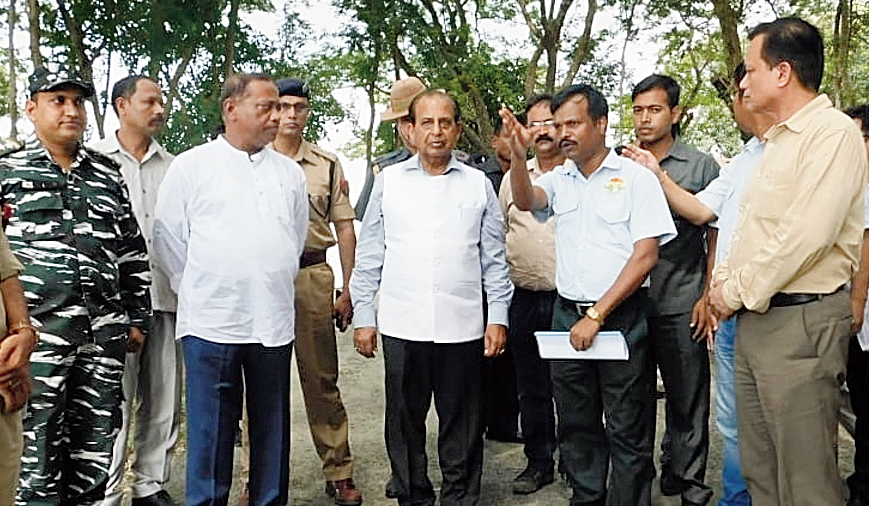 Assam governor Jagdish Mukhi visited Kaziranga National Park on Sunday and took the stock of the flood situation, while the death toll of rhinos increased to 12.

The governor and forest minister Parimal Suklabaidya reached Mihimukh in the morning and discussed the situation with the park authority. Mukhi expressed satisfaction on the efforts of the park, police, civil officials and NGO workers to minimise animal deaths.

The governor asked the park authority to submit a detailed report of flood damage to the state government along with a proposal for infrastructure development. “The governor expressed his satisfaction on the work of the park authority and others during the floods. He was also satisfied with the highlands constructed in the park,” Kaziranga director P. Sivakumar said.

The highlands were constructed in the last two years after the devastating floods in 2017, when around 400 animals died, including 30 rhinos. The highlands allowed the animals to stay back in the park rather than shifting to the adjoining Karbi Anglong hills.

Suklabaidya also supervised the time card system started by the park authority to control the speed of vehicles on National Highway 37 passing through Kaziranga and expressed satisfaction.

He also discussed the security of animals with forest officials at Kohora.

Most of the rhinos that drowned were calves.

The report issued by the Upper Assam wildlife division said the water level had receded by 142cm till Sunday evening.

It said 141 animals had died while 64 animals were rescued. The records revealed that 15 hog deer and one sambar had died after being hit by vehicles.

Sixty-eight forest camps out of 199 are still inundated. Five camps under Bokakhat wildlife division have been shifted to higher ground.

Dhubri situation: In lower Assam’s Dhubri district, the receding water level of most rivers brought some respite from the flood havoc.

However, the Brahmaputra continues to flow above its danger mark in the district.

Seven persons have died in the recent wave of floods, while around 30,000 people are living in relief camps.

Mukhi said in Dhubri on Saturday that the state government had declared a one-time ex gratia of Rs 2 lakh for the kin of the victims.

In South Salmara-Mankachar district, over six lakh people in 143 villages have been affected. Deputy commissioner Atika Sultana said 205 Anganwadi centres and 68 lower primary schools had been damaged in the deluge. Additional director-general of police Bhaskar Jyoti Mahanta on Friday visited the border areas in the district and took stock of the damaged road near the Asameralaga border outpost.

Probe ordered: Goalpara deputy commissioner Varnali Deka on Sunday ordered a probe against vernacular newspapers which had published reports on discrepancies and anomalies in relief distribution in the district. Two additional deputy commissioners have been asked to submit the report within 24 hours. Around three lakh people have been affected by floods in Goalpara district. The Bikali Mouza Unnayan Samitee of Dhupdhara donated Rs 1 lakh to the Chief Minister’s Relief Fund on Saturday.