Peaceful protests were staged by AASU, AJYCP and other student organisations across state 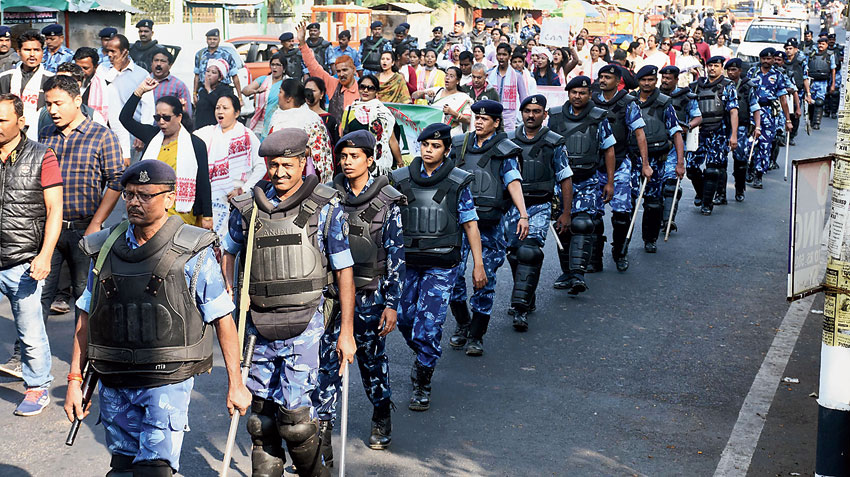 Normality returned to the city, with the opening of shops and business establishments, after the curfew was completely lifted on Tuesday.

During the day, people went about their daily life.

However, peaceful protests were staged by the All Assam Students’ Union, Asom Jatiyatabadi Yuba Chatra Parishad and other student organisations. No untoward incident has been reported across state over the past 48 hours.

AASU chief adviser Samujjal Kumar Bhattacharjya and general secretary Lurinjyoti Gogoi, along with hundreds of other agitators, courted arrest for the second consecutive day on Tuesday, as part of its mass satyagraha against the Citizenship (Amendment) Act, 2019. Apart from students, actors, musicians, singers, teachers, lawyers, doctors and litterateurs, the elderly also took part in the protest march.

Curfew was completely lifted on Tuesday morning after the state government reviewed law and order in the state on Monday night. The restoration of mobile Internet will be decided on Thursday after reviewing the situation, senior cabinet minister Himanta Biswa Sarma said here on Tuesday.

Although markets have reopened, prices continued to skyrocket owing to reported shortage in supply of essential commodities.

Vehicular traffic was also lean apparently because of app-based cabs remaining off the roads owing to suspension of Internet.

At least four persons were killed and over 25 injured here in alleged police firing on act protesters amid a curfew since Wednesday, when the agitation turned violent.

“Meeting the victims of bullet injuries in Gauhati Medical College. For PM Modi and BJP, they are Pakistanis and Maoists. For me they are brave Assamese fighting for their land, culture, identity and future. #TakeBackCAA #CitizenshipAmendmentAct @INCIndia,” he tweeted later.

The Sadou Asom Karmachari Parishad, the apex state government employees’ organisation, will go on ceasework on Wednesday seeking scrapping of the act. The Assam Secretariat Services’ Association has also extended support to the strike.

The Parishad has about 4.5 lakh members. Other government employees, primary school and college teachers have also pledged support to the movement against the act.

The Parishad, which had pledged support on Friday during the AASU-organised fast at Chandmari, started its protest from Monday in all the districts. “We will go on complete ceasework on Wednesday. The members will also join AASU-organised protests,” said Partha Hazarika, general secretary of the secretariat services’ association.