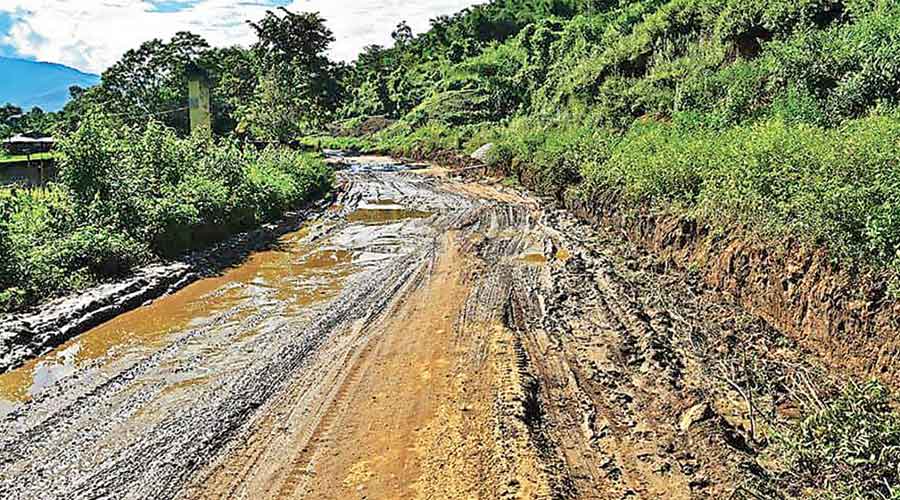 A senior BJP leader from Arunachal Pradesh has written to Prime Minister Narendra Modi drawing his attention to a proposed national highway project cleared “in principle” in 2017 but allegedly awaiting formal clearance from the Prime Minister’s Office even after the final feasibility report was cleared in 2018.

The proposed highway from Meb-Geko to Itanagar via Gerukamukh/Gogamukh in Assam, would not only cut distance between three remote districts of Upper Subansiri, Siang and Kamle and state capital Itanagar by around 145km and 185km on two existing roads but also give a boost to the local economy and the speedy movement of troops, heavy artillery and logistic support systems in the event of any national emergency, Larbin Nasi, former MLA and executive member of the state BJP, told The Telegraph.

The existing road from Daporijo, one of the remotest district headquarters, of Upper Subansiri, strategically located near the India-China border, to Itanagar via Ziro has a distance of 335km and the alternative route via Basar/Likabali is 375km. Both the roads have been in a deplorable condition ever since they were taken over by the ministry of road transport and highways from the Border Roads Organisation since 2009, Nasi said in his letter to Modi.

The former MLA has also highlighted the importance of the proposed highway by stressing that Ashsapila, Maja and Sera-7 border posts under the control of Indian Army are reportedly under serious threat now. The Chinese have reportedly built up massive infrastructure and road connectivity near these posts — Sera-1 to Sera-9 — whereas there is no road on the Indian side.

China considers Arunachal Pradesh as part of South Tibet. In the 1962 Indo-China war, the state was affected, including Upper Subansiri, which is “as the crow flies it is about 90km from border”.

“The only means to reach these posts and patrol by the Indian Army is through porter track and temporary ladders and suspension bridges for several days in inhospitable and harsh mountain terrains from administrative circles of Nacho, Limeking and Taksing. If these posts are captured by China, PLA (People’s Liberation Army) will be in (an) advantageous position because of their heights. As such, the threat of intrusion by PLA is imminent and is all the more vulnerable now with porous international border. The construction of this highway has become all the more relevant and urgent in view of current border conflict,” Nasi said.

The people of the three districts have a long-standing demand for a shorter route originating from Meb-Geko near Daporijo connecting Gerukamukh/Gogamukh in Assam.

“This would be the shortest route from Daporijo to Itanagar, a distance of around 190km compared to the distance on the two existing roads, which are 375km and 334km. The Union transport and highways minister had on January 13, 2017, declared the route a national highway in principle, much to the relief and succour to the people of the three districts,” Nasi, also the chairman of the Ziro-Tai-Ananda Bagan Highway Committee, said.

The matter (decision to declare the national highway) is reportedly still pending with the PMO even after the final feasibility report was cleared by the competent authority of the road transport ministry .

“In the best interest of national security, we appeal to the Prime Minister that the shortest route be declared as a national highway,” Nasi said.

Though often highway or development projects get stalled or shelved because there are issues with the local populace but that is not the case with this project. “Most importantly, unlike any other project in Arunachal Pradesh, the land owners all along the proposed road have volunteered to donate their land free of cost. Intimation to this effect was conveyed to secretary, ministry of road transport and highways, by the state government on August 1, 2018,” he said.

Lardik Kare, secretary-general, Tagin Cultural Society, told this newspaper that the national highway demand was an old issue. “The PMO should consider it seriously given our ties with China. Not expediting the project is also unfair to the people of the three underdeveloped districts,” Kare said.