The Burah Jame Masjid Peace Award, 2019, was presented to 10 persons 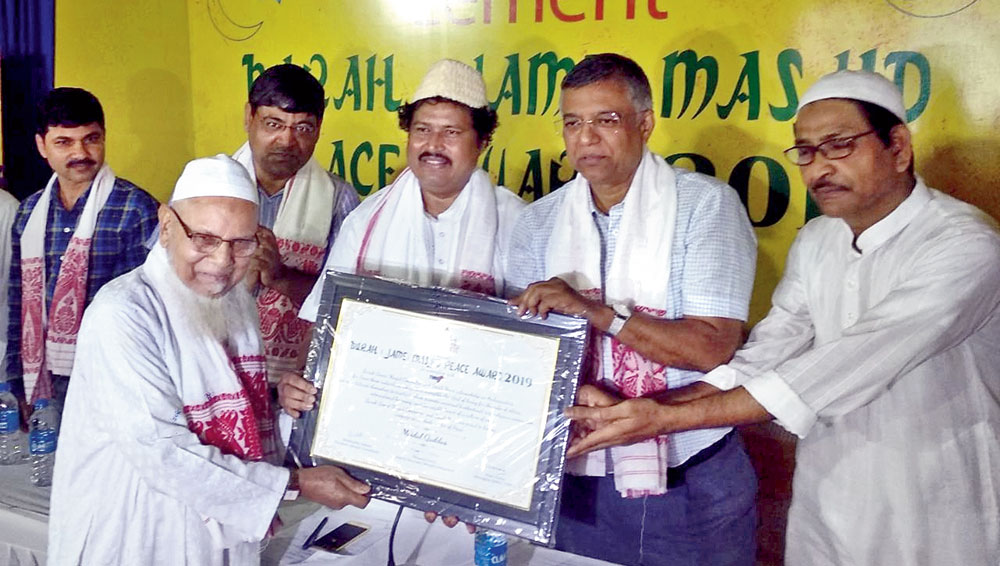 The Burah Jame Masjid Peace Award, 2019, was presented to 10 persons who have contributed to peace and harmony in Assam and brought positive changes in society, in the run-up to Id.

The second edition of the award was organised along with a grand iftar party on Monday by Amrit Cement, in association with the management of Burah Jame Masjid and digital news outlet Time8.

The Burah Masjid at Ambari is one of the oldest mosques in the city and a historical landmark. The dargah on its premises is revered by both Hindus and Muslims.

Around 700 underprivileged people, including women and children, partook of the Iftar offerings.

The Peace Award is the only such award in the region given during the holy month of Ramadan. Instituted in 2018 to promote communal harmony, it awards eminent personalities from different communities and walks of life who have contributed towards building a better society.

Satyen Sarma of Kumarpara devotes his time to bringing together people from different communities.

Mirel Quddus of Machkhowa is a popular comedian who starred in several Assamese hit movies of yesteryears. He now champions social causes.

Dr Ashim Chaudhary provides free treatment to the poor and Anowar Hussain and Inamuddin Ahmed are involved with the welfare of Burah Masjid.

Umar Rashid is a former sportsperson, now associated with badminton coaching while Khalilur Rahman runs a madarsa for 80 poor students in Morigaon.

Lauding the noble initiative, Bhattacharya said, “This is an important and laudable initiative to present the Peace Awards on the eve of Id. I congratulate the recipients and wish them well. I also express my good wishes to the management of Burah Masjid for providing assistance to poor students for higher studies and skill development.”

Id-ul-Fitr greetings: Nagaland governor P.B. Acharya on Tuesday conveyed warm greetings to the people of the state, particularly to the Muslim community, on the occasion of Id-ul-Fitr.

He hoped the sacred occasion would usher in goodwill and harmony and further strengthen the values of composite society everywhere.

Additional reporting by our Dimapur correspondent