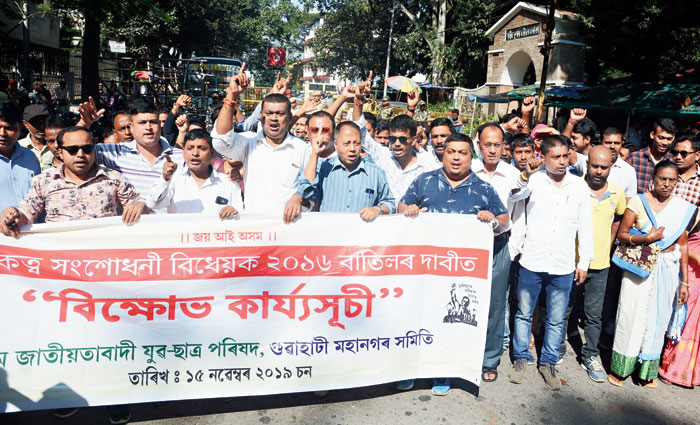 The first day of Parliament’s winter session on November 18 will not only see a statewide protest against the Citizenship (Amendment) Bill, 2019, in Assam but also in all state capitals of the Northeast.

At least 11 political parties, under the banner of the Left Democratic Manch (LDM), Assam, on Friday announced an agitation against the bill on November 18. The protest will coincide with another demonstrations called by the North East Students’ Organisation (Neso), in all northeastern state capitals the same day. It is widely expected that the bill will be tabled during the ensuing session.

Manch secretary Deben Bhattacharyya said, “The bill will not only impact the historic Assam Accord but also adversely affect the region’s demography. The recently updated National Register of Citizens of Assam, also based on the midnight March 24, 1971, of Assam Accord, will be declared null and void if the bill is brought in.”

Neso advisor Samujjal Bhattacharjya said, “The Assam Accord has defined who is an illegal infiltrator. Changing this definition for vote bank politics will not be allowed at any cost. Hundreds of people have sacrificed their lives fighting against the illegal migrants from Bangladesh and we will not let their sacrifice go in vain.”

“We, the All Assam Students Union and 30 other tribal groups of the region will continue to protest against the bill till the Centre decides to drop it,” Bhattacharjya added.

Friday also saw hundreds of Asom Jatiyatabadi Yuba Chatra Parishad (AJYCP) members hit the streets in several places, including Guwahati, Mangaldoi, Sonari and Jorthat, protesting against the bill. The AJYCP criticised both the Centre and the state for being “insensitive to the pleas of the people”.

AJYCP Jorhat president Pranab Jyoti Saikia said, “The BJP is trying to replicate the colonial divide-and-rule policy and create differences among people over religion and language.”

“Let all unite against it and strengthen the movement. The people of Assam will not accept the bill at any cost,” Akhil added.

Though the bill was passed by the previous Lok Sabha in January, it was not introduced in the Rajya Sabha following raging protests across the region. The bill lapsed with the end of the term of the 16th Lok Sabha in May.

This time, the Centre is likely to place a fresh version of the bill.