He fell in love with the tune of mandolin in his early days. Then he turned to film and theatre and became the one and only showman of Assamese films. 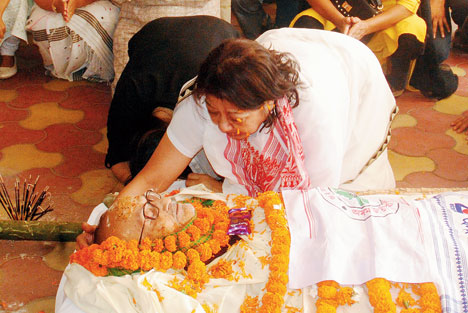 Guwahati: He fell in love with the tune of mandolin in his early days. Then he turned to film and theatre and became the one and only showman of Assamese films.

The commercially most successful Assamese filmmaker, Munin Barua, passed away early on Saturday at his residence here. He was 72. Barua had been suffering from serious health issues for the past year.

"He first worked in the Assamese film Mamata, directed by Nalin Duarah, in the 70s. He had played the mandolin for the background music of the film. It was the starting point of Munin Barua's cinematic journey," film critic Utpal Mena said.

In his lifetime, Barua penned 95 plays for various mobile theatre groups of Assam along with more than 50 scripts for television and film. He started his career as a director with Pratima, a joint directorial venture of Barua and Nipon Goswami. Then he directed Pita Putra independently.

He bagged the national film award for the best feature film in Assamese for Dinabandhu in 2004. On the other hand, Hiya Diya Niya, released in 2000, was the first blockbuster of Assamese cinema, which earned Rs 1 crore on the box office, with a budget of Rs 25 lakh.

Jatin Bora, chairperson of Assam State Film (Finance and Development) Corporation Ltd, who became a star after working with Barua, said, "We were planning a new film. Bhaiman da (Barua) had invited me to his home today to discuss about the film. This will remain an unfulfilled dream for me."

"He was like my father. I will miss you, Bhaiman da. The Assamese film industry has lost an asset," singer Zubeen Garg said.