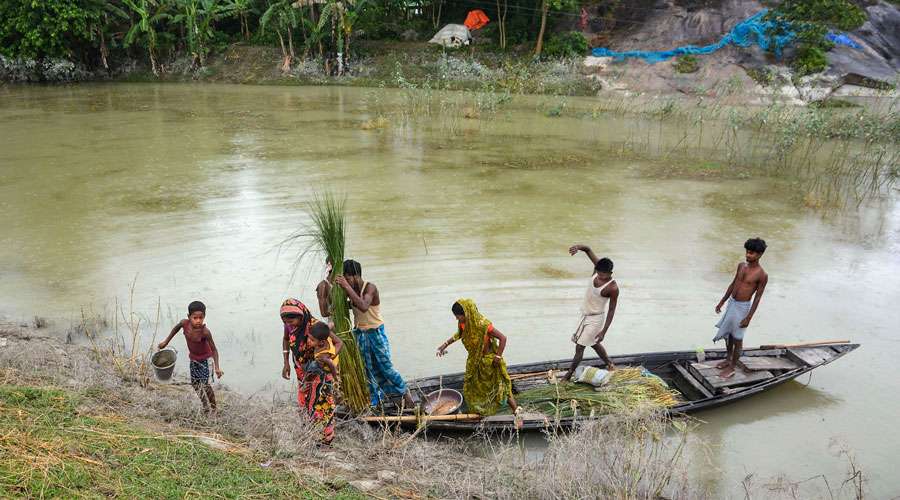 Flood affected villagers move to a safe place from the flooded locality in Morigaon district of Assam on Sunday.
PTI
Our Special Correspondent   |   Guwahati   |   Published 20.07.20, 04:38 AM

Prime Minister Narendra Modi on Sunday said the Centre was keeping a “close watch” on the ongoing flood, erosion, Covid-19 and the May 27 Baghjan gas well blowout crises.

Modi assured all help and cooperation to the state in managing the challenges. He spoke to chief minister Sarbananda Sonowal over phone and took stock of the situation in the state, assuring that the Centre would stand with Assam during these difficult times, the chief minister’s office said in a statement on Sunday.

Around 137 people died in flood and Covid-19 till Sunday.

The Prime Minister had also called Sonowal on July 3 to take stock of the flood situation and assured all possible support to fight flood, erosion and Covid-19.

A tweet from the PMO said, Modi has sanctioned Rs 2 lakh each to those who have died in the floods, which have received global attention.

Gowda had even urged Modi to extend maximum attention to Assam.

The global attention had forced All Assam students’ Union adviser Samujjal Bhattacharjya to tweet, “@Arsenal FC is among the top flight of English football playing in  @premierleague. Commendable that they recognise the flood induced devastation in Assam & stand by us. It is disheartening that the Govt still turns a blind eye, like EVERY TIME.”

“The Prime Minister said the Central Government was keeping a close watch on flood, erosion, Covid-19 and Baghjan situation in the state and had been standing closely with the people of Assam during these difficult times. He also assured all help and cooperation from the central government in managing these challenges, the CMO statement said.

Sonowal has briefed Modi about the prevailing position as well as the efforts to provide relief to the people.

Floodwaters have started receding but the magnitude of the destruction is coming to the fore only now. Similarly, despite the lockdown, Covid 19 cases are increasing alarmingly, sources said.

The ongoing floods since May 22 have affected over 54 lakh people in 30 out of the 33 districts, claimed 84 lives and damaged 2.49 lakh hectare of cropland.

The Met office has warned of inclement weather till July 22. Erosion has been reported reported from 17 districts, including Majuli, Barpeta, Dibrugarh, Lakhimpur, Bongaigaon, Udalguri and Tinsukia.

The Covid situation is also alarming with the positive cases crossing 23,000 and claiming 53 lives.  The Union health ministry has predicted the cases to cross the 64,000 mark by August 14, with half of these cases will be from Kamrup Metro district, the worst affected.

The Baghjan blowout in Tinsukia district has affected over 9,000 people. They are still living in relief camps. OIL, which operates the gas well, will mount the capping operations next week, sources said.

Protests over delay in deciding compensation are hampering caping operations.