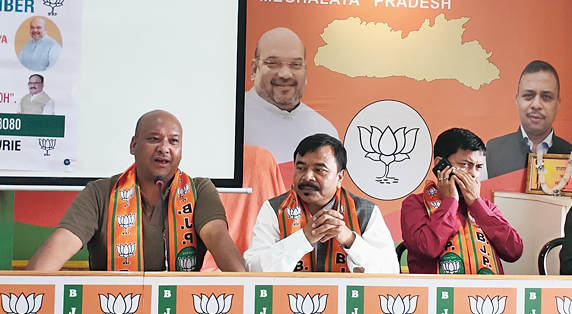 The Meghalaya BJP is on an enrolment drive but not on the lines of the model adopted by the party in Mizoram.

The Meghalaya BJP, which launched the drive on July 6, aims to sign up two lakh members till August 12, state convener Ernest Mawrie said on Tuesday. “The party has received a good response and we have enrolled, offline and online, around one lakh members. People are aware about the BJP and our leader Prime Minister Narendra Modi,” he said.

Asked if the party would follow the Mizoram model to increase its footprint in Christian-majority Meghalaya, Mawrie said, “We have not thought about the Mizoram model. We convince people to join and many are accepting our party. They appreciate the programmes initiated by the Prime Minister.”

In Mizoram, the BJP has formed a Christian missionary cell to build relationship with all churches. Tagged anti-Christian, the party aims to send the message that it is secular and believes in the Constitution.

Before the drive, the BJP had said it has around 43,000 members. Mawrie said so far 20,000 members have been enrolled online and around 74,000 offline (30,000 in Garo hills, 40,000 in East Khasi Hills district, including Shillong, and 4,000 in Jaiñtia hills). About one lakh application forms were printed for offline enrolment.

A person can become a primary member of the party by giving a “missed call” on the toll-free number 8980808080 and follow instructions given in the message or opening the link http:://sadasyata-parv.narendramodi.in/ or through Narendra Modi app.

“Active membership drive will be initiated from August 12 to 31. Any member who can enrol a minimum of 25 persons is eligible to become an active member and to be selected as state office-bearer in different capacity/responsibility within the party set-up,” he said.

The Assam Christian Forum has expressed concern over the “haste” in which the Centre is trying to press an “unstudied and un-reflected” education policy on the people.

In a statement issued on Tuesday, Forum spokesperson Allen Brooks said Church leaders feel that little respect is being shown in the policy to the autonomy of individual states and to their concern for preserving their identity and cultural heritage.

“They (Church leaders) feel that there is a planned strategy to homogenize the Indian society, ignoring regional diversity and inherited ways of passing on the heirloom of centuries to the next generation. They also feel that a carefully formulated strategy is in play to undermine the immense contribution in the field of education and for weakening the efforts of minority groups and smaller communities to lift themselves up from their humbler positions. If implemented, this education policy will ensure that no one from the lower ranks will ever be able to go beyond their assigned level,” Brooks said.

“Dissent is being systematically sponsored, fragmentation is encouraged and irritant cells are being planted to as many Church groups are possible. Those who work for the dominant party are formed into a ‘Christian Missionary Cell’ whose mission will be to collect data about Christian activities and pass it on to their opponents who wish to undermine the unity of the Christian service in the Northeast. The threat to unity is the greatest threat that we see on the horizon,” Brooks said as he quoted leaders of the Assam Christian Forum.