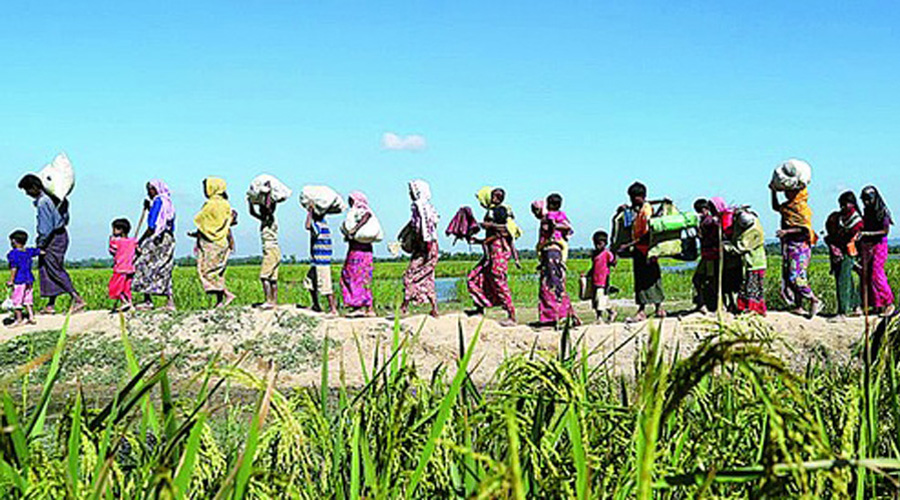 The Manipur government had on March 26 directed the five districts to “politely turn away” those seeking refuge in the state from Myanmar.
File picture
Umanand Jaiswal   |   Guwahati   |   Published 21.04.21, 01:22 AM

High Court of Manipur on Tuesday not only directed the BJP-led state government to provide safe passage to seven Myanmar nationals “in hiding” in Moreh to Imphal but also prevented the state or central government from taking any “coercive action” against them till further orders.

The seven had sneaked into Moreh in Manipur, bordering Myanmar, to escape possible persecution by the military junta following the February 1 coup in the neighbouring country. It is not known when they entered Moreh.

The interim order was passed by a division bench of Chief Justice Sanjay Kumar and Justice Lanusungkum Jamir acting on a writ petition filed by senior lawyer and human rights activist Nandita Haksar. The petition sought a direction to the Manipur government to provide safe passage to the seven persons from Myanmar, four adults and three children, to go to Delhi, to enable them to seek protection from the United Nations High Commissioner for Refugees in Vasant Vihar. She had filed the plea last Friday.

Since the state government and Centre sought an adjournment and the petitioner sought interim relief to bring the stranded Myanmar nationals to state capital Imphal, around 100km from Moreh in Tengnoupal district, the bench directed the administration to “arrange for the safe transport and passage” of the seven individuals because the court was told that these persons “need to be protected and are under constant threat of apprehension/deportation by the authorities”.

The court said the petitioner “undertakes” to accompany the Tengnoupal deputy commissioner to the location where these persons “are in hiding so that they may be given safe transport to Imphal under appropriate escort”.

However, the court said, before they are brought to Imphal, the district authorities are permitted to take these seven individuals to the senior immigration officer at Moreh for the purpose of noting their details and also obtaining their biographic and biometric information.

“Thereafter, they shall be brought safely under escort to Imphal and stationed at the residence of the petitioner/party-in-person under adequate security and guard till the next date of hearing. It is also made clear that, pending further orders, no coercive steps or adverse action shall be taken in relation to these 7 Myanmarese persons, be it by the State or by the Central Government authorities,” the bench said. The next date of hearing is April 26.

The Manipur government had on March 26 directed the five districts to “politely turn away” those seeking refuge in the state from Myanmar only to withdraw its order following widespread criticism of its “unconstitutional” approach in dealing with the aggravating humanitarian crisis.

Loitongbam said Haksar has gone to fetch the seven refugees from Moreh.

“They will be staying at Haksar’s residence in Imphal till the next date of hearing. Reports suggest thousands of Myanmar nationals have already sneaked into Manipur and are in hiding along the border because of government policies. There is a shortage of food, clothing and mosquito nets. We are raising funds to provide them basic amenities. We have already collected over Rs 1 lakh,” he said.

On April 18, the Citizens Committee, Manipur (CCM), under the chairmanship of former chief minister Radhabinod Koijam, deliberated on the possible humanitarian response to the Myanmar crisis, Loitongbam, who is the convener of the CCM, said.

The committee has appealed to the people to contribute, in cash or kind, in order to extend all possible humanitarian assistance to the Myanmar citizens taking refuge in the border villages of Manipur.

“It has also decided to make a representation to the Prime Minister to ensure that the Myanmar citizens fleeing their country from persecution are treated humanely in the spirit of vasudhaiva kutumbakam (the world is one family),” Loitongbam said.