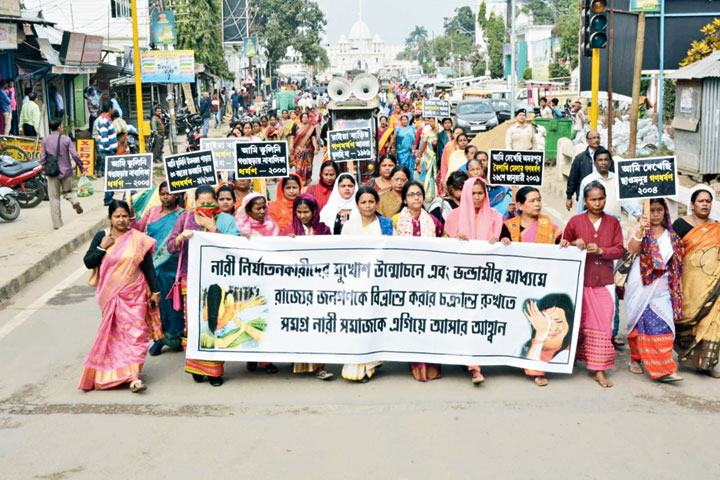 Condemning the “apolitical” rally of the ruling BJP legislator Sudip Roy Barman which is slated for Friday, thousands of women on Thursday hit the streets here to show solidarity against crimes faced by women.

The rally was called by Soma Majumder, who was tied to a pole and assaulted by some men in full public view in 2014 for protesting against some youths who had forced her husband Nirmal to drink liquor during Durga Puja immersion.

Speaking at a mass gathering at Paradise Chowmuhani here on Thursday, Majumder recounted her horror.

She alleged that Barman, then a Congress MLA, failed to redress her grievances and suggested that she patch up with the culprits.

Blaming Barman, who was dropped from the state cabinet in May last year for not coming to her rescue, she said: “I dare him to come in front of me. I am not even afraid of dying for this.”

In an oblique reference to Barman besides his father and then chief minister Samir Ranjan Barman, the president of the BJP Mahila Morcha, Papia Dutta, alleged that the father-son duo used pictures of Indira Gandhi for personal gain.

Dutta claimed the fate of women cannot be secure in the hands of those who publicly abuse their own party chief who was also a woman.

“Why didn’t they protest when Soma Majumder was tortured and abused?” Dutta told reporters.

She clarified that she did not join the rally as a political leader but as a woman.

A large number of workers and leaders of the Mahila Morcha participated in the rally. Over 5,000 women across all the eight districts of the state took part in it.

Reacting to the allegations, Sudip Roy Barman said he had called the rally to protest crimes against women and it would be held as per announcement on Friday.

“What they are claiming are lies and the rally which they organised today was called just to satisfy someone’s ego at the cost of the party,” he said.