Members had been waiting to see the bill's fate in the Rajya Sabha, and were ready for a fresh agitation 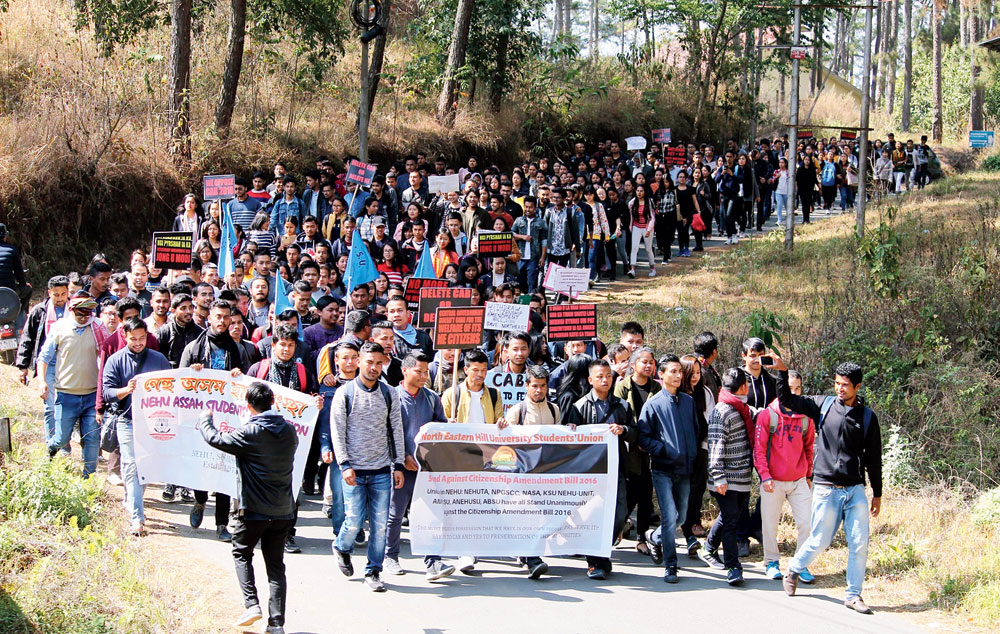 However, he reminded the state government that it should implement the inner-line permit and the National Register of Citizens and other laws to protect the indigenous people.

The confederation has been asking the Conrad K. Sangma-led government to implement the ILP. It said if the government felt the ILP, contained in the 1873 Regulation, could not be implemented, it can come up with its own law like in Manipur to regulate the entry and stay of outsiders.

Consultant to the North East Dialogue Forum (NEDF), Rev. P.B.M. Basaiawmoit, praised all those who stood against the bill. “Let us remain united for the integrity of India, and maintain secularism and plurality with the mosaic of cultures, languages and religion,” he said.

He also urged the government to bring back stability and normalcy, and all those charged with sedition and other draconian laws for opposing the bill should be released unconditionally.

An activist waves a KSU flag in Shillong.
Picture by Evanjoplin Dkhar

Jubilant activists of the Khasi Students’ Union (KSU) took out a “victory rally” here on Wednesday after the Centre failed to table the Citizenship (Amendment) Bill, 2019, in the Rajya Sabha.

Several activists had been waiting at the KSU’s office for the outcome of the last day of the Rajya Sabha session. When the bill could not be tabled, and the Upper House was adjourned sine die, the activists felt it was time to celebrate.

They then sat in two and four-wheelers, waved the union’s flag and took to the roads to celebrate the victory of the protests against the bill, which have rocked the Northeast.

“We took out the victory rally to celebrate the inability of the central government to move the bill on the last day of the Rajya Sabha session,” KSU general secretary Donald V. Thabah said.

He said since Tuesday, activists have been waiting at the KSU office to learn about the outcome of the Rajya Sabha session, and to prepare for agitation if the bill was passed.

Apart from the KSU, the Confederation of Hynñiewtrep Social Organisations, an umbrella body of several pressure groups, was exuberant. It had organised a mass meeting here last month to oppose the bill.

“Today marks the victory of the people of Hynñiewtrep and of the Northeast. We thank all those who have worked hard to oppose the bill. We express our gratitude to MPs, chief ministers, political leaders, pressure groups from all over who have opposed the bill in unison,” confederation chairman Robertjune Kharjahrin said.