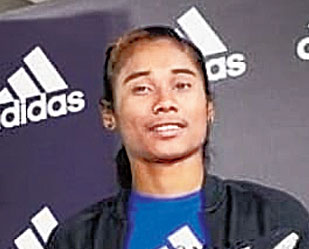 India’s latest track sensation Hima Das has appealed to all stakeholders to contribute towards fulfilling her commitment to Prime Minister Narendra Modi that she will be accompanied by 10 more athletes from Assam for the next Asian Games in China.

“It was embarrassing for me to be the lone medallist from Assam when the Prime Minister invited us state-wise onto the podium on our arrival in New Delhi from Jakarta. All other states were represented by groups of medallists. So I committed to the Prime Minister that by the next Asian Games I will be accompanied by 10 more medallists from Assam.

“Now, it’s the people’s turn to help the athletes fulfil the commitment. If the government, sports organisers, sports lovers and the corporate and business sectors really love me, they will definitely help us fulfil my commitment. Assam is rocking with talented sportspersons and a little bit of support from every stakeholder can help Assam fulfil the dream,” Hima told The Telegraph on Thursday.

She said infrastructure, coaching and financial support are the keys to achieving the goal and felt the government, organisers, business sector and the media can play a role.

She appealed to the Auniati Xatra, that gifted 10 bigha of land to develop an athletic track in her village, No 3 Kandhumari in Nagaon’s Dhing, to consider gifting an additional plot of land so that a track of international standards could be laid.

“I have talked to the xatra authorities recently. A few people are objecting to the proposal because they have been farming on the land. I hope they will understand that an international standard sports infrastructure can help produce many more sportspersons from Dhing. It could be their own children,” she said.

India was represented by six athletes from Assam, including two-time Olympian boxer Shiva Thapa, in the Jakarta Asiad. Hima bagged a gold and two silver medals.

On her conversation with Modi, she said: “The Prime Minister started in Assamese asking me about my health and about Assam. He encouraged me to do better.”

On being named for the Arjuna award, she said: “Honestly, I was expecting it next year after some more performance in the Asian and world championships. But, it came this year itself which is motivating for me.”

Having become the first from Assam to sign up with sports gear major Adidas as brand ambassador, Hima said it would not only boost her career but also give a fillip to the athletics scenario in India.

“Being the first from India, barring cricketers, it is invariably an achievement. It gives me immense pleasure to associate my name Hima Das with Adidas, literally a perfect match. I think it is not only a matter of pride for me but for the people of Assam that an Assamese girl became the first to achieve the feat in a country of 130 crore,” Hima said.

She signed a two-year contract with the German major to endorse their products and Adidas has launched premium sprint spiked shoes with her name on it.

Hima had sported a pair of Adidas spikes during her medal-winning sprints in the Asiad as well as the World U20 Championship.

On her plans in the run-up to the Tokyo Olympics in 2020 and her competition with Bahraini rival Salwa Naser, Hima said: “I am focusing on every single event ahead of me. My sole aim is to better my timing in every race. I am my own competitor. I am not bothered by any other competitor. With the training under my coach Galina Bukharina, the best one can afford in athletics, I am sure I can further improve my timing by the next race I run.”

Asked if Indian were in any way inferior to its African counterparts, which has often been reflected in athletics in the past, Hima said:

“Those days are past. The future is India. India is rocking in athletics and Indians will henceforth be the force to reckon with especially in athletics.”