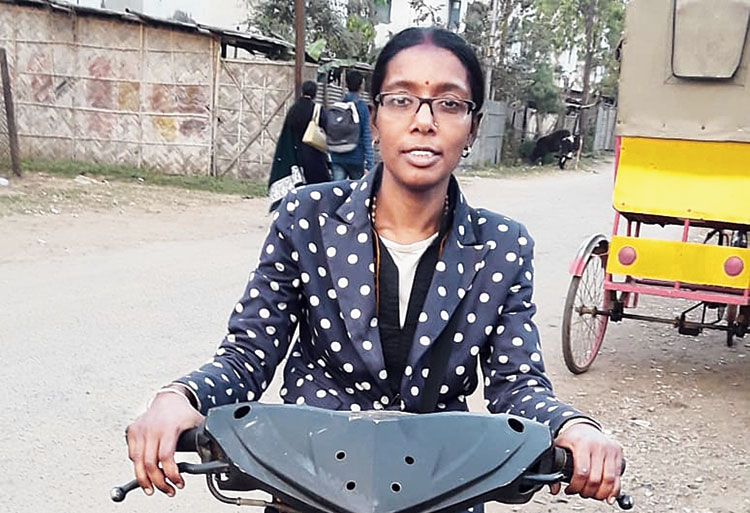 Every morning she puts on her helmet and steers her scooty round the city, ferrying passengers from one place to another.

Meet Pinky Malakar, the first and only female rider of Rapido, an app-based two-wheeler taxi service in the city.

It was not easy being the city’s first woman app-cab rider but Pinky, mother of a 10-year-old girl, braved all odds and her confidence and will power certainly made all the difference.

“It feels great. I’m proud of what I’m doing. Some are shocked when they see a woman but many are pleasantly surprised. Many of my passengers have appreciated my work,” an excited Pinky told The Telegraph during a break from her hectic schedule.

Before she joined the app-cab service, Pinky, a class X-pass, had taken up several odd jobs to make ends meet. She also worked as a domestic help to overcome her financial problems.

“I don’t mind doing any kind of work and I take pride in whatever I do. I had a huge crisis in my family and underwent extremely bad times for two years,” Pinky, a resident of Chandmari, said.

Before joining Rapido for better financial benefits, Pinky had tried her hand at Uber Eats, the food delivery service. “It was very interesting when I approached Uber Eats. The office people were all surprised to see me looking for the job of a delivery girl. They liked my approach so much that they didn’t even charge the fees mandatory for enrolment. One of my friends later told me about Rapido,” she added.

“The first two days I was a little hesitant but after that I grew in confidence. Many passengers appreciated my work. One elderly man took a selfie with me and wished me good luck. These are motivating gestures,” she said.

However, the hurdles of being a female rider are always there. Many passengers don’t agree to ride with her and some harass her.

“It’s disheartening to see people cancelling my ride because I’m a woman. Sometimes I ask people why they cancelled the trip. I was also harassed by a boy who took a ride with me. Later I complained at the office,” she said. The office helps her get rid of ill-mannered passengers, she added.

The authorities at Rapido here said it was a pleasant surprise to have Pinky as their first female rider.

“We try to encourage her. We will welcome more such female drivers in Guwahati. She is an example for many. We are proud of her,” Suman Acharjee, the city head of Rapido, said.

The Bangalore-based Rapido started its service in the city in December last year. Now they have around 1,200 active riders.